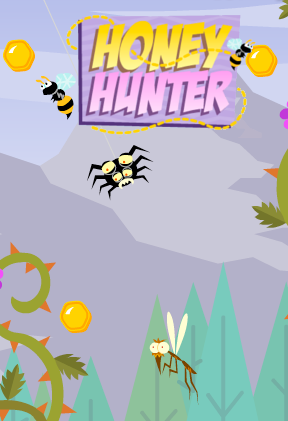 Bees. We fear them. Ever since our teachers warned us against tampering with beehives, we've imagined horrid droning swarms armed with venomous harpoons and a zeal for stinging manflesh. But perhaps we should see the world through their tiny eyes, a world of hostile arthropods, artillery-grade raindrops, and really, really spiky plants. Honey Hunter, an outwardly cute mouse-controlled side-scrolling game by Denys Moysin (SBTeam), gives us a dark glimpse at the fragile lives of these misunderstood creatures.

You are a lone soldier drone, tasked by your queen with various missions to further the glory of your hive. Control is with the mouse, the clicking of which will make with the stinging of hostile insects, spiders, and larger foes. Each mission involves a group of levels, and you can only complete a level by collecting all the hexagonal drops of golden honey to be found, some of which are guarded or dangerously positioned. Missions also end with boss fights, in which your combat skills are put to the test. Hopefully before boss battles you have taken the time to upgrading your speed, attack and health at the hive, spending experience points gained from gathering honey and killing mean animals. Collect honey, avoid obstacles, and serve your hive.

Honey Hunter is very cute. Graphics are bright and colorful, the soundtrack is usually bouncy and sunny, and the animation slick and cartoon-like. The cuteness is deceptive, because it's not a light or easy game. Attacking takes some finesse and timing, and you are often better off avoiding larger foes instead of taking them on directly. Careful avoidance is a big part of the game, because apart from the baddies, everything from water to spiderwebs to unusually thorny flora can consume your meager (though expandable) health reserves. Some drops of honey are also positioned so that only a careful, surgeon-like hand can collect them without touching a hazard. The game is surprisingly tricky.

It's also surprisingly dark. I mean, it's kid-friendly enough. This isn't Edward Gorey we're talking about. But the extreme fragility of the protagonist is enhanced by certain elements of the story, such as it is. Even though it stays colorful and cheerful, I am very much left with the impression that a bee's world is a dangerous one.

The juxtaposition between cute and dangerous is strange, but it shouldn't detract from a solid, if tricky, arcade side-scroller. It's not the most original title, but it's well-designed, and it's take on apian life is intriguing. Remember the advice of your teachers: the bees are as scared as you are.

I really didn't enjoy it, but then I don't really like these kind of games. I found it to be too twitchy.

Yeah, the movement is not synced quite right. It makes you dizzy when you're not actually moving all that much.

I find it very biologically inaccurate: Bees do not have specialized "Soldiers," all workers are female, and supplying a sting is suicide. The game doesn't exactly show the world through a "bee's eyes."

I liked the concept, but the motion is jerky and the game lags. If the motion were smooth, I think I'd be able to play it for a while.

I like it. It runs well for me in Chrome (Ubuntu).

The one thing that's annoying me is hit detection when I try to sting. A lot of the time, I cannot tell what determines whether I hurt the enemy or the enemy hurts me.

I got dizzy and yeah, I couldn't tell whether I was in striking distance or not most of the time. The game looked fun but I couldn't handle the bad controls.

Whew, I finally finished the game. Quite a learning curve on the later levels. More grueling than enjoyable towards the second half. This is coming from someone who finished Meatboy without too much difficulty. I couldn't stop myself from playing, but I wouldn't call it fun, exactly. Game designers: high difficulty is fine, but if you do, make the levels shorter, please, or use save points.

Blue Taslem, if you can believe it, the main character bee IS a girl. This is confirmed in the closing text. Just because she's not wearing a pink bow and showing cleavage, you shouldn't make assumptions. As for the rest of your points, well, Queen Bees don't really send their workers on spying and assassination missions either. Nor do

mad scientists build Robobee colonies, complete with Roboqueens, to try to gain control over all of the honey resources in the world. (As far as I know.)

In other words, fully acceptable artistic license in my book!