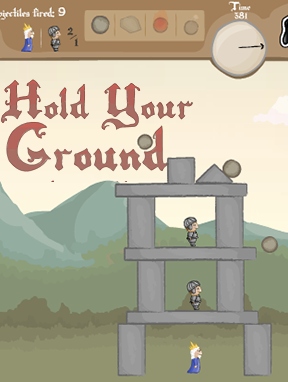 What has royalty ever done that was so bad? Sure, there's been a few taxed-in-the-ground peasants and the trifling matter of some wars of conquest causing untold death and misery, but what's a little abuse of power between friends? Certainly it's nothing that deserves having one's castle knocked in on one's head, a la Crush the Castle. Hold Your Ground rectifies this situation by putting you in charge of building a defensive structure to guard the royal person. God save the adorable little bearded king!

Before each level, you receive important information about the incoming assault, such as the direction of the wind and how many guards you must save to pass. Then, you use the mouse to click on various shapes of blocks to construct a castle around the little floating figures, rotating the blocks with [Z] and [X]. Once you click "start", the figures will drop down to the hopefully steady ground you've placed beneath them, and various objects shall rain down from the heavens.

Analysis: Hold Your Ground is clearly a response to and influenced by Crush the Castle and its player pack sequel. Hold Your Ground makes effective use of sound and visual effects, and it's similarly no slouch in the physics department. However, Hold Your Ground does not appear to have learned lessons from the best games of its subgenre, which is the stacking puzzle.

The most critical feature standing between an amusing stacking puzzle and an exercise in mouse-hurling frustration is a good undo. Undo should truly mean undo, a return to what what on the screen before your cat jiggled your elbow and you released that mouse button a second too soon. Although Hold Your Ground does have a "bomb" icon which can destroy a piece on the field and return it to your inventory, if your mistake bumped another piece from its position, it can easily have already totally ruined the structural integrity of your castle, and there's no way to fix it. That leaves the only option as hitting reset. Making such a mistake just as you were putting in the thirtieth and last painstaking piece can cause rage quit in otherwise healthy adults. (Talk to your children about rage quit... before someone else does.)

To a certain extent, this is only so frustrating because of the appeal of the level designs, unique reversal of the destruction genre, and engaging art. I'm left whispering at the smoking remains of my mouse, "It didn't have to be this way, tiny beard king!" If you think you have the mouse fu not to make mistakes, or the patience to click reset when you do, you'll find a lot to enjoy in Hold Your Ground.

I didn't even make it to the point where I assume the AI starts firing at your king and guards.

Having gravity enabled without the ability to turn it off was extremely annoying, I was trying to place the two blocks for the first level and they kept rotating on their own despite my attempts to use 'z' and 'x' to rotate them as stated in the instructions. I was finally able to get them within the dotted suggested area then selected a large thin block to place on top. It spawns below my two base blocks knocking them over! It was at this point that I rage quit.

This game sounds good in premise but the execution of the building stage in it's current state is unusable, at least in my eyes.

@Innou: You have to drag the pieces from the bottom - just clicking them will spawn them right there where the buttons are. Z and X should work once you drag them.

My biggest problem with the building was that the cursed physics are left on, rather than letting you change a blueprint. When you're just trying to slide a block over and the friction and jiggle physics knock everything off, building becomes really frustrating.

Fun alternative to the normal "destroy the tower" games. I really wish clicking 'Retry' let me edit my level as I built it instead of clearing it and making me rebuild the whole thing from scratch every time.

It's a nice idea but the controls are clunky. If I move a block I've already placed, everything connected to moves also. It's easier to just start over.

This would have been okay for a Linkdump Friday but I really don't think it's polished enough to get its own review.

Nobody was killed on level 13 yet it still said I failed...it says I need to save "undefined" number of guards to pass...

This game seems really glitchy. During level 3 I was able to somehow clone the large blocks endlessly by just clicking on the play field after I had selected one, which of course took away any of the challenge. And no, the rotation feature doesn't seem to work. At least not in firefox.

I find the controls quite frustrating and difficult to use as well. Why are pointer and movement two separate controls anyway? I also saw the same bug Hippolyta did of the infinitely spawning blocks. This game seems like it's not ready to be played.

I dont know how to beat day 12. how do i beat it. it said i need undefined guards. HELP

Fiddle around with the rather unfriendly controls to build a castle... accidentally hit 'retry' instead of 'start' because it's marked in a messy font and I'm not paying attention... it clears out all the work I just did... close tab and move on with my life.

Fun game but when I beat day twelve with no lives lost I still failed the level. Very frustrating!!!!