Hide and Secret:
The Lost World

You want action? We got that. You want cheesy storylines with French villains obsessed about obtaining immortality, kidnapped scientists, plane crashes and giant spiders? Got that, too. Hide and Secret: The Lost World from Anarchy Enterprises is the fourth game in the hidden object adventure series, featuring a classic-styled plot ripped out of your favorite dime novel from a century ago. 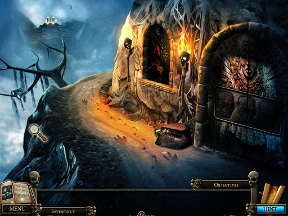 Your arch nemesis, Jacques, has stolen an ancient relic and kidnapped Professor Columbia, absconding with them both to the Lost World. There, his plan is to sacrifice the professor to reveal the relic's secret: eternal life. Your team of fit adventurers sets out to stop him, but before you make it, your plane crashes in the jungle. Rescue your crew who are barely holding on to their lives (quicksand, collapsed pillars, etc.), then set out to stop that Jacques!

Hide and Secret: The Lost World blends frequent hidden object scenes with a multitude of mini-game segments scattered around an exploration-based adventure core. Move from place to place, investigating pieces of each scene and hunting for items that will help you progress. Sometimes you can find the objects you need laying around the place, but most of the time you'll need to find your next inventory prize at the end of a hidden object scene.

You can choose between Relaxed and Expert modes from the beginning of your game. The former offers faster hint recharges and makes the mini-game skip button fill much faster. Also, there's no click penalty in Relaxed, which many hidden object fans will appreciate! Expert mode shortens the timers and slaps you on the wrist for clicking too frequently in hidden object scenes. 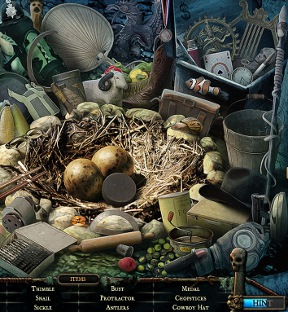 Analysis: Hide and Secret: The Lost World is definitely a wild, if predictable, ride. The storyline is one of the game's biggest selling points. It's based on every trope from the last hundred years of creative writing, but somehow it comes across as a caricature of the genre, not a poor example of it. Sometimes that sort of cheese is exactly the food we need in our games!

You'll spend quite a lot of time in Hide and Secret 4 sifting through the hidden object scenes that seem to appear every few minutes. For the most part, they aren't overly challenging, though you'll often wonder why you have to continue with the exercise once you've found the key inventory item you want to walk away with.

Some of the puzzles, unfortunately, feel rather pointless and end up serving as busywork rather than honest challenge. The hint system also doesn't function properly all of the time, leaving you a bit stranded when the game wants you to trigger a specific event before continuing. If you're a thorough player, this probably won't be an issue, however.

Visually, Hide and Secret: The Lost World is lush and polished. The scenes are filled with animation and lots of dramatic mood, something the storyline demands to be shown. The characters look remarkably stiff, though, and seem to have been rendered with software from 1994. Cardboard actors aren't much of a problem when you're laughing at them, of course!

Hide and Secret: The Lost World has a lot of hits and misses to its name, with muddled puzzles but good challenge and length. It's definitely worth checking out, especially if you're itching to see if Jacques gets that immortality he so desperately wants!

Base Camp and Broken Bridge

River by the Bell

River and Base Camp

Stone Staircase and Base Camp

Stone Staircase and the Pit

Base Camp and Tipi

Base of the Pyramid

Base of the Pyramid Hidden Object Scene

Base Camp and Beehive Tree

Base Camp and Guardian Statue

Chapter 9: Telescope and the Heavens

Guardian Statue and Top of Pyramid

Base of Pyramid Hidden Object Scene

Top of the Pyramid

Base Camp and Broken Bridge

River by the Bell

River and Base Camp

Stone Staircase and Base Camp

Stone Staircase and the Pit

Base Camp and Tipi

Base of the Pyramid

Base of the Pyramid Hidden Object Scene

Base Camp and Beehive Tree

Base Camp and Guardian Statue

Chapter 9: Telescope and the Heavens

Guardian Statue and Top of Pyramid

Base of Pyramid Hidden Object Scene

Top of the Pyramid

This was a little difficult. It was fun and challenging but if it hadn't been for the walk through I don't think I would have made it. There was to much skipping around for me. Despite everything, I found the game enjoyable.
It is definitely not a game for little kids or dummies like me.