Doesn't it always happen this way? You discover your ancestor had an ancient castle, only the thing is going to be sold in nine days. It's downright discouraging!

Fortunately, in Hidden in Time: Mirror Mirror, you've been given the nine days to go through the castle. Maybe you can find something that proves this castle is yours? Although it's hard to see why you'd want it—the place is riddled with the kinds of objects that only exist in hidden object games, and the objects in Mirror Mirror can be weird even for the genre. Who has a rocking bear? Not a rocking horse. A rocking bear. Apparently, the eccentric Fairwiches do. 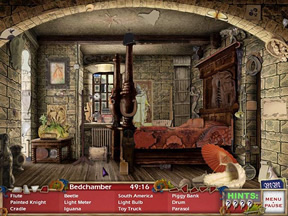 The Fairwiches also have a family curse. The story goes that the Duke and Duchess were approached by a gypsy with a magic mirror which she said would reveal the right man for their daughter Marion, but that if the Duke disobeyed, a terrible curse would fall upon them. The Duke agreed to this. When the Duke looked into the mirror, the mirror told him that happiness would be brought to all if Marion married the maid's son, Jack. Forgetting all that "horrible curse death decay mayhem ill-fitting shoes" stuff, the Duke refused to condone the match—and the story will soon reveal that the Duke "died face down in his salad". What a way to go.

Aside from the hidden object finding scenes which make up the bulk of the gameplay, Mirror Mirror includes three mini-games which repeat between levels: a spot-the-difference scene, a game where you have to rotate mirrors to reflect light at a target, and a rotation puzzle where you have to turn pieces of a painting in order to reveal the next message. The latter two puzzles can get repetitive rather quickly, but the spot-the-difference sections may be the most fun part of the game. The two scenes are mirrored, so you can use the cross-eyed trick to solve them, and the art in these sections may be the finest in the game.

Feel free to use hints the second you get stuck because the game practically throws them at you. Every mirrored scene contains three hint tokens to find, and you get a hint token for completing the other two mini-games as well, plus when you move to the next level your hints are refilled. 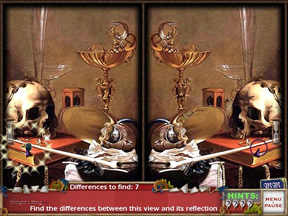 Analysis: As the quote indicates, Mirror Mirror has a definite yet understated sense of humor about itself. If you click on certain objects such as horses or dogs that aren't on your hidden object list, they might bark, squeal, neigh, or make other noises. Lots of these games try too hard to be funny and fail, so it's nice to see a game that understands that over-the-top puns are not the key to laughter.

On the other hand, humor deflates tension, and the tension in this game never really gets high enough to warrant deflating. Although the atmospheric music is subtly spooky and never gets repetitive, even if you play the entire game in two sessions like I did, you never really have a sense that you are in danger or that what you're investigating might have a scary or unhappy end. In fact the whole experience is rather relaxing.

In fact the biggest way I can think to improve this game would be to ratchet up the humor even more. Mirror Mirror comes right up to the fourth wall at times; it would have been nice to see it smash it, maybe by lamp-shading some of the tropes of hidden object games that we all accept but that are rather ridiculous in themselves. For example, the scariest thing in many horror-ish hidden object games isn't the music, the flitting ghosts at the edge of the screen, or the threat of imminent death—it's that the same inanimate objects seem to be following you around, and that rooms are never the same as you left them. Is that giraffe statue following me? Eek! I'm sure that mantelpiece did not have a tropical fish on it before!

Hidden in Time: Mirror Mirror won't keep you on the edge of your seat, but it is a fun romp through hidden object land that would be perfect for those times when you just want a little relaxing amusement.

Well, I hate to be the first one to leave a comment and it not be a positive one, but, there it is. The hour trial is enough to get through about 50% of this game (assuming you get "Very Impressive" on most or all of the levels, and complete everything as quickly as possible). And I wasn't impressed. The objects you need to find in this game range from silly to downright ridiculous. Almost every item in every level feels like an anachronism, regardless of what the time peroid may actually be. The "beautiful castle interior" is muddied with lion and origami creatures and pairs of binoculars. Most of the items look oddly shopped in. And why is there a pterodactyl? Or an eyeball? Also, items are repeated WAY too quickly. I had to find the same piece of toast, or the same plaster hand, or the same SAFARI HANDBAG almost 6 times in that short one hour trial. The challenges in between the levels are laughable, and nearly identical every time. There is no element of challenge. There's a "hint mirror" in every level that's always ridiculously easy to find. You literally are REQUIRED to take two steps back for every step forward. Every time you advance to a new room, you have to return to the two previous rooms to look for suddenly relevent clues, that for some reason you couldn't have looked for the first time. None of the actual OBJECTS you find are necessary at all, but you do have to move some stuff out of the way to find boxes and keys. The entire "hidden object" part of the game is unnecessary. I hate to bash, but the Mystery Case Files games really show this thing who's boss.

After finding all the objects and putting the mirror shards into the frame, take the two rose keys from the top of the frame and open the mirror. You have to mirror the clock on the mantle, which is set to 9, therefore set the clock to 3. Easiest is to hit the right button once and the left button five times. Then click on the clock. You will get the deed to the castle!

Walkthrough written by joye of JIG

I'm pretty sure I played a demo to this once. The game didn't make much of an impression, but I remember not liking the story that much.

The mystery turns out rather generic