All y'all played Heroes of Sokoban, right? You know, the game with the warrior, the thief, and the wizard on the hunt for treasured doors? The dungeons were peaceful before, but now you've got to match wits with goblins and dragons in Heroes of Sokoban II: Monsters, a continuation of the Sokoban puzzle game by Jonah Ostroff using the PuzzleScript engine. 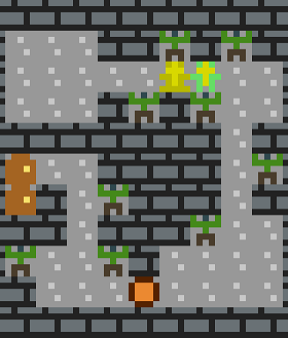 As before, you've got to navigate your band of adventurers (using the [arrow] keys to move and [X] to switch between your characters) to the exits, bearing in mind your players' quirky personalities (the warrior can push objects, the thief can only pull objects, and the wizard swaps places with objects). However, dungeons are now littered with goblins that instantly kill you if you move into an adjacent square and dragons that kill you if you move into the line of fire (pun intended) to the left or right of them. Monsters can hurt each other though, so you need to figure out how to move monsters out of the way or trick them into killing each other, especially when an M wall blocks your path to the exit.

But what ho, another adventurer? Heroes of Sokoban II also adds the yellow priest, a mystical character that's immune to attacks from monsters. In addition, the priest can protect any companions in adjacent squares from otherwise certain death. Don't let the auto-immunity fool you though, these puzzles start out tricky and only get harder with the addition of the fourth character. Take on the vicious brutes and continue your conquest of the world of doors with this truly puzzling sequel.

Stuck on level with

two monsters and one dragon and an M

You need to kill one goblin with the dragon, then get the other dragon and the goblin to kill each other simultaneously. I recommend you start by pushing the dragon into the upper left corner.

Thank you, Sonic. It worked!