Hero in the Ocean 2

Getting lost in an underwater cave sounds like a nightmare for most of us, but for the team of Lampogolovii and Leric it's an adventure. Hero in the Ocean 2 is an immensely satisfying sequel, dropping the submarine from the first game into a slew of new underwater challenges. You control with the [WASD] or [arrow] keys, navigating past myriad nautical dangers including buzz saws, mines, and the odd sea monster eager to scarf you down. Unlock most submarine games, nudging the wall doesn't cost health, leaving you free to focus on exploration. The game has sort of a "Metroidvania" feel to it as you backtrack to find keys and switches to unlock doors, and the physics system is spot on, even if the puzzles take a while to get challenging. This is a game for casual players and those seeking relaxation (the beautiful soundtrack is a vacation in of itself). Lovers of gore and guns need not apply. 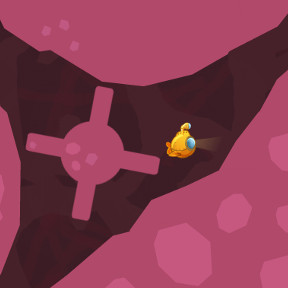 Hero in the Ocean 2 builds on the strengths of its predecessor while still offering some new concepts. The game features several powerups, including scissors for cutting bomb tethers, a hot-and-cold treasure detector, and tiny glowing jellyfish that will give you a helping hand now and then. 100% completion buffs will find some themselves scratching their heads trying to get all three stars in each level, even if the treasure chest at the end is sometimes fairly straightforward. The encounters with sea creatures are the highlights of the game, and sad to say, they're not as common as they should be. Watching huge serpents awaken from the rocks and pursue you offers a great thrill. It's nice to let a gorgeous piano ballad lull you into a trance while you push further into the depths of this cartoonish Marianas trench. If you're big on chilled out exploration, puzzle solving, and great music, check out Hero in the Ocean 2 and prepare to lose a chunk of your afternoon.

Play Hero In The Ocean 2

I encountered a glitch that first didn't pick up a star and then didn't activate the monster. It happened after the level three monster killed me the first time. I had to reload the page because the gear wouldn't work either. I tried to reproduce the glitch but it didn't. So, I'm just pointing out that it happened.

Also, flash is supposed to be scaleable. What's with these games that don't let you zoom in?

Possible bug on level five. When you

I like how this game doesn't kill you when you hit the walls. It used to be that to increase difficulty, walls would kill you.

This game is pretty neat. The music is super calmy and I like the white follow me monsters!

Level 11 was the hardest one. Those black monsters never give up chasing you!

That was pretty good apart from that horrible pixel perfect puzzle on level 15.

Do you mean the dance dance deluge tion game? It wasn't that pixel perfect but it does seem to ignore some keystrokes sometimes so you miss the arrows. Even with that it doesn't take more than like ten seconds to get through it.

My biggest beef with this game is that it doesn't surpass the original. Not even close. Sure the graphics have been updated, and the levels less blocky, but one expects updates in games. But...
- Where are the hidden areas and treasures? That was a big part of the original, going back to old levels to find what you missed.
- Puzzles have been nerfed. In the original, you were switching back and forth between tools in the levels, but here it was maybe just one tool per level, and those were mostly just for that level then never seen again. There were also many more tools. Where was the resizing?
- "Hero" of the Ocean was apt in the first one, rescuing divers. Here it's just treasure hunting.
- The lasers were a big part of the first one. Not even an appearance here.
- The sea creatures (both good and bad) while well used, were terribly under-utilized.

In all, the original had a lot more variation in level design, and utilized the puzzles much better. I don't know if the transition from Makmik to Gogy developers meant a loss in talent, but if there is going to be a 3rd in this series, I would greatly encourage stepping up their game.

My favorite so far is level 12. I loved how the little guys help you. :)

Stuck on Level 13. Is there a strategy to knocking them all out with only 3 shots, or do you just have to get lucky?

@shipoopie
Sorry. Not sure why my comment posted as a response to yours. O well.

found a metal monster, set it off once. It wouldn't go off again after that. The 1st star on that level vanished (it WAS still collectable) and there appears to be nowhere to hide from that metal monster.

Please DON'T put unfinished/untested games online, it reflects badly on you as a programmer.

It looks pretty, it plays well. It's just bugged to hell.

I really enjoyed this one, probably even more than the first. No glitches on my end. I agree with @LightWarrior that some lasers might have been nice, but somehow it just seemed more...fluid? Maybe it was the music...

@JudyJetson: Yeah, that was the trickiest part of the game for me, apart from maybe that initial race against time in the last level. I eventually figured out that

I was flying too fast. The first time I tried moving much more slowly, I had enough reaction time to take out more critters with each shot and managed to hit them all in 3.

Exactly same thing happened to me too.

I have a glitch. The screen says "loading graphics" for 45 minutes or possibly longer. I cannot play the game.

Finally had a chance to get back to this game after starting it on Monday. Too bad it didn't save my progress...

Thanks! Unfortunately, the game didn't save my levels when I closed it out, so I will have to replay the entire thing. It's going to be a few days before I have time to replay it, but I will definitely try moving slower when I get to level 13. Thanks again.

Like the previous game, a delightful bit of casual gameplay you can return to for idle enjoyment.

How do you defeat the serpents on the 11th level? I can't seem to out-run them. Isn't there a tool around that would enable you to shoot them?