The underworld stinks. And I mean that literally, since its demonic residents don't bother taking baths. It's gotten so bad that other demons had to build a giant cannon to fire them into a boiler to get de-stunk, and in Rocanten's quirky physics puzzler Hell on Duty, you're at the controls! Just aim and fire with the mouse, trying to knock each stinky denizen into the waiting bubbling cauldron below them. The stars and points you get at the end of each level depend on how many shots you had to use, as well as any bonuses you were able to pick up. As you go, you'll unlock more ragdolls to function as ammo, and some have special abilities to get the job done, like Freddy being able to cling to wood. 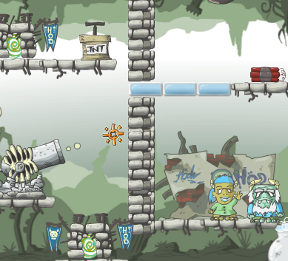 Physics puzzles are a dime a dozen, but Rocanten's is anything but hellish. (Ba-dum-tish.) The quirky premise helps, sure, but more to the point, the game makes clever use of its level design to force you to put your unique ammo to well-thought-out use in order to win. Some of the ammo takes a little getting used to, like mastering the quick clicks needed to aim Wart Dater, and the game rather sneakily adds moving your cannon as a puzzle element into certain levels as well. Add to that teleporters, broilers, rolling balls, and a whole lot more, and Hell on Duty is actually a remarkably robust little game at sixty levels that don't wear out their welcome before they're over. Though some levels occasional demand precise accuracy and the physics occasionally don't feel like they're paying attention, the goofily endearing design, piles of new puzzle elements, and a sense of ghoulish charm to the whole thing makes this one worth a spin.

A bit of an odd error: when I was playing through the levels, just hitting next each time, it skipped level 50 and 56. I went to the level select, and I had star ratings for levels 51-55 and 57-60, but they were still grayed out. (Level 56 was also grayed out.)

A quirky oddity... if you play in multiple sittings, achievements don't seem to carry over between sessions. Also, the first time you have access to each of the types of ammunition (per session), the intro to each type runs again.

Gameplay is pretty standard for a game of this type; one other interesting thing; a lot of games use random saying between levels - this one uses specific blurbs between levels; I don't know if that's more or less challenging to code, but I think it's worth noting.