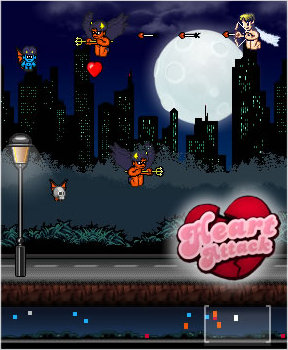 The über-talented Preloaded folks have done it again and released another Flash game to promote their own skillz, and this one does a fine job of showing off the Flash magic they are capable of.

Appearing on their wedonicethings website, Heart Attack is an arcade action shooter in which you play as Cupid trying to save the love from the darkside by shooting arrows at little devils and other assorted gremlins.

There are 8 hearts you must protect on each level, and several orange devilish sprites who have their hearts set on stealing them from under your nose. Liquidate the evil bastards with your arrows before any of them grabs a heart, or shoot it down before it makes it to the top of the play field. Then, catch the falling heart to be justly rewarded. If a devil makes it to the top, the heart is converted to the darkside and comes after you with a vengence. Use the radar screen below the action to aid you in your quest.

Arrow keys move Cupid up and down, left and right—if you're left handed, the [W][S][A][D] keys provide respective functionality. Space bar shoots an arrow from a limitless supply. Pressing [B] drops a smart bomb that kills any enemy within a city block. You are given only 3 smart bombs to begin the game, and you earn an additional one for each level you complete. A scoring bonus is also awarded for each heart remaining at the end of a level.

Heart Attack is an adorable little shooter filled with charming graphics, earth shattering explosions, and exquisite particle effects. Detailed animations and sound effects make the game shine, and multiple layers of parallax scrolling adds a nice touch to a very pretty game. The enemy AI is also well-done, thus providing a hearty challenge for anyone turning their nose up at the game's cute exterior.

Kudos to Squize and all of his hard working mates across the Atlantic, Heart Attack is 100% pure love from Preloaded. Share the love. Click.

I remember this game! Defender for the Amiga (back in the day) is exactly like this, except you controlled a spaceship trying to stop aliens from abducting people. Very nice remake of it though.

Aliens abducting people makes a bit more sense than devils stealing hearts and rising up to the heavens. A bit of willing suspension of disbelief is needed with this one. =)

Thanks for the nice words and the great write up :)

It's actually based more on the C64 game Dropzone than Defender ( Although that's kind of a moot point ).

As a little extra for the people visiting here, try pressing CTRL and the middle mouse button ;)

Middle mouse button??! I dont have one of those. I'll have to find a way to fake it, I guess.

By the middle mouse button, I meant clicking the scroll wheel. Sorry ( Old school habits die hard ).
No big a deal, but I thought after the great write-up be nice to give you and your readers a little easter egg.

This is actually a reworking of the old BBC B game Planetoid. There's a screenshot here.

'fraid not mate. Planetoid is a Defender clone, and HA is a lot closer to Dropzone ( Which is of course a Defender varient ).
To be honest I can only vaguely remember Planetoid ( Only rich kids had BBC micros, the rest of us had to make do with Spectrums until we could afford a C64 :) ).

When I click on either link for Heart Attack, Shootin' Stars comes up instead. It's a fun game and all, but I kinda wanna play Heart Attack. :(

I pity those little devils. Also they have a right of their lives and lifestyle. Why doesn't anyone make games that are devil-proponent?

And why must the boys always protect the girl? Why never the opposite?