After the success of Nearly Headless Nick, meet Completely Headless Carl, the star of Headless Zombie, the new puzzle platformer from Flazm. Carl used to be a nobleman, until an envious wizard caused him to fall off his horse, break his neck and die. However, dark magic has a funny way of backfiring, and Carl came back as a zombie to reclaim what is rightfully his and hopefully eventually de-zombiefy. But first, there is a long way to go and many obstacles to overcome, so use the [arrow] keys to move and the [spacebar] to throw your head. Wait, what? 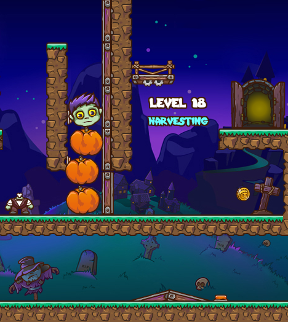 Apparently, one of the advantages of being undead is that you can freely detach parts of your body and toss them around. So any time Carl has to reach a remote lever or press a button that's too high up, he can take his noggin off and fling it towards them, but he must put it back on before he can exit a level. He can also accessorise, replacing his boring old head with fashionable items such as boxes and pumpkins. All this is quite beautifully incorporated into the puzzle aspect of the game. Once you master the jump-then-toss manoeuvre, the levels will seem intuitive and nicely structured, with relatively complex setups fitting into a screen with no need for scrolling. The visual style, with its colourful, yet macabre design and little funny details, is reminiscent of Plants vs. Zombies and the mechanics are pitch-perfect. You could say that the challenge is lacking a little something, or maybe that it would have been nice to see more than twenty levels, but there is definitely a hint at a sequel, so we can expect more fun with Carl in the future. In the meantime, competitive zombie head throwing should totally become a sport.

Couldn't do level 6. I knew what needed done ... but couldn't make the shot. Not even sure his head fit through the gap.

Sorry ... I was trying to throw his head at the lever lol

That 1st shot with your head they want you to make is the singlest hardest shot in the whole game.

Are you sure? Because I made Level 20's first shot easily on every try.

I agree with Sonic

Ohh and this one of the best games I have seen in a while, which I admit will place it in the easy slot for most:)

But for a little puzzle and some platforming and great animations, and NONE of that suddenly I have to scale mount everest 5/5 from me

In a way, this game reminds me of Pursuit of Hat, which happens to be one of my all time favorite browser games.

Let him stand there for a while, even those animations are adorbs.

(couldn't agree more though. but not in public... *whistles*)

*stands up* My name is yaddab and I am an adorbaholic ... there I owned up, now for the recovery phase..... yo didly dum dee dee

Don't know if I'm being blind on the bonus level but I can only get 29 coins. So frustrating!

(Is this against site policies? Heheh. Anyway, I forgot to say, this is a great game for little kids. Especially the Halloween-mad ones.)

Definitely got my attention. Very creative idea and well explored too.

I'm not a huge fan of the visual design though. But that's just personal opinion.

About level 20. It took me a while to realize it wasn't as difficult as it seems, because our intuition tells us that if you touch the guard you die. But that's not how it works here, the guard has to swing his arm to hit you and that gives you plenty of time to do throw your head.

Room 33: Living with a Rocking Chair

6,478 Views
2 Comments
chrpa— Jayisgames needs your help to continue providing quality content. Click for details What a beautiful game we've got from Ichima Coffeedo! It is the complete renewal of five years old Room 17 and it's very well done indeed. Two weeks...  ...

8,275 Views
10 Comments
chrpa— Jayisgames needs your help to continue providing quality content. Click for details Hi! Weekday Escape and Weekday Puzzle are here! This week we've got two standard escapes, by tomoLaSiDo and by Crayfish/MysteriousBox. The second is much longer with a...  ...