Head for the hills! It's a headless undead... oh wait! It's just that Headless Zombie, Carl. Poor old Carl. Once a rich bloke with nothing to lose or so he thought 'til he lost his head. What? Too soon? Long story short, Carl is stuck in his undead form but with a little help from that wonderful electricity genius we all know and love maybe he can bring our charming little Carl back to life. That's right, Meowbeast brings us the second installment of this zombie platform puzzle, Headless Zombie 2, where Tesla is willing to help bring our hero back to life as long as he agrees to find the cogs Tesla needs strewn throughout levels. As before, Carl can pop off his head and use it to press switches and so forth, even if that head is a robotic substitute... though there's nothing like the real thing, so Carl still needs to have his head on his shoulders before he can go through a level's exit. That robot head has its own uses, however, and in addition to being a surrogate noggin, if it touches any electric orbs it'll be charged so that if it's placed on (or lands on!) a robot body, it'll move on its own, and can even be used to activate other electrical components like magnets... handy if you, say, have an anvil for a head, which you very well will. Sometimes Carl's head may land on a different body, and when that happens, both it and his headless body will move at the same time... just be careful, since a robot torso may be fireproof, thus allowing you to get through flames safely, but Carl's good old zombie body is not, and those electric balls can burn you up good too! 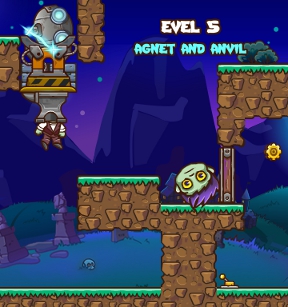 Headless Zombie 2 is a great addition to the first game. It sticks with the same mechanics, with [WASD] or the [arrow] keys to move and jump, and the [spacebar] to detach your head but builds up bigger and better puzzles than before. A lot of them require the skill of throwing your own head, which is moving/jumping and hitting the [spacebar] to let it fly. This is a hard skill to tack down and one I personally could have done less of, but still, this game is a great mental workout even with its cartoonish, family friendly looks. You have to think through things carefully because one mistake can be your doom. In the later levels if you forget to flip one switch or aren't where you're supposed to be when you do push the button you can get stuck and the reset button is the only option you have. With the new tricks and addition of a robot body/head for you to use there is still plenty of fun to outweigh the small hangups. You will be thrilled to get to the doorway, but just be sure you have your head with you. You kind of need that when you're turned human again.

This game can be incredibly annoying near the end. Also, Happy New Year!

What is with the typos? Does their "c" not work
I once had a computer in my possession that the f,g,h,j,k,l and ; did not work. Lots of copy and pasteing.

Yeah, getting a lot of typos on my screen too. The walkthrough shows all the letters just fine, but on my computer I'm currently playing "evel 14". There's no pattern that I can see. Maybe it's a Firefox thing? It looks like the reviewer taking the screenshots was having the same issue.

I did have the same issue when I was playing. I assumed it was some odd play off the fact that he was headless seeing as most of them were missing the first part of the word. I didn't look at the walk-through, so I didn't realize it was different.

I've played this game on Newgrounds too, and I'm pretty sure it didn't have so many spelling errors there.