Although they're twins, Stella and Christie have never gotten along, and Christie can't shake the feeling that her sister was glad to be rid of her when Christie left the family home to go to school in London. Everything changes in the blink of an eye, however, when Christie receives a letter from Stella telling her their parents are dead and begging her to return home. Has the tragedy finally provided the catalyst for the two sisters to put aside their differences? Or is Christie's dewy-eyed hope for sisterly reconciliation blinding her to the obvious signs of danger... you know, like the spirits of the damned that rise out of the grounds surrounding the family homestead to greet her. Given that the title of this hidden-object adventure from Top Evidence Studio is Haunted Manor: Queen of Death and not "Learning to Love Again: The Christie and Stella Story" on the Lifetime movie network, you can probably guess where this is going. 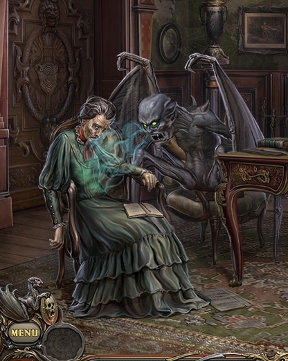 Because this would be an extremely boring game otherwise, Christie naturally returns home to find her home barricaded, malevolent beings prowling the area, and a sinister breeze that keeps whispering I am evil... or maybe I hate weevils... or even soylent green is people. It's hard to tell. Regardless, Christie's got a lot to worry about, and it doesn't help matters that her family home was apparently designed by the Umbrella Corporation and is packed full of puzzles, secrets, and complicated keys. The game only has one mode of difficulty, so you'll find sparkles drawing your attention to interactive areas and hidden-object scenes you need to solve. In short order, Christie discovers an ancient cursed medallion with a local legend clinging to it may be the source of all the heartache and horror plaguing her family... but with people dropping like flies left and right and her progress impeded by puzzles and apparitions at every turn, she might be running out of time to do anything about it before the medallion turns its gaze on her. Kind of makes all your problems seem trivial, doesn't it? So what if your computer got a virus and you forgot to pick up coffee... at least some grotesque naked gray spider demon isn't trying to kiss your soul out while you try to solve a complex mathematical puzzle to open a lock, you wussy. 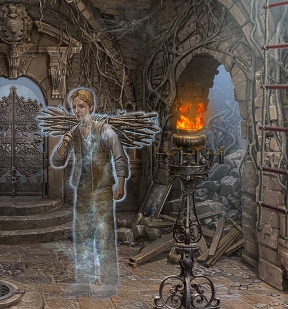 Analysis: Don't let the spider demons and murder-by-soul-suck scare you; despite all the spooky sounds and monsters, Haunted Manor: Queen of Death isn't actually frightening. It doesn't even try to startle you, so you can also cross jump scares off the list of things to worry about. You'll see spectres and monsters pop up as you play, and naturally you can expect to run across some creepy scenery and otherworldly murder, but even the worst of that pales compared to, say, the closet scene from The Ring. The artwork is gorgeous and crisp, with clear detail that adds interest to every environment, and while the repetitive soundtrack may lose its creepy charm after the seventh or eight time you hear it loop around, on the whole the production is top notch. The story is entertaining, but also a bit of a mixed bag because the big twist is not only fairly obvious, but is also actually revealed on a lot of the promo material from Big Fish Games.

The gameplay as a whole is solid, despite a lot of backtracking, with challenging hidden-object scenes and familiar but clever puzzles. It does suffer somewhat from an inability to let you sit back and figure things out yourself. It's like the game interprets any hesitation your part as complete and utter bafflement and starts fluttering sparkles everywhere to point out places you can click. Despite this, however, Queen of Death manages to remain solidly enjoyable because of how hard it works to keep you engaged and interested. You're constantly catching glimpses of Stella, beckoning you at the end of a hallway, finding damning letters left behind, being menaced by flying furniture, and combined with the solid gameplay makes for an easily recommended title. You can expect to spend close to five hours on it if you take your time and don't speed through puzzles, and if you've been looking for a good looking and stylish hidden-object adventure with just a touch of supernatural flair, the demo for this is well worth a look.

Rather good game and a great review! Says it all, really. It is a pity that the game isn't at all scary - with a story like that one just expects the occasional creepy moment. But still a very good game. Thanks for introducing it!

Loved it all the way until I got to the Music room HO where there is no Moai statue to be found, even when using the hint button for location.

It is a great game, semi challenging, and a little slow in some places. Not always easy to tell where to go next. Decent graphics and story line, overall good experience.

i cannot find the coral. the barrel is opened and the water drained but i cannot get any coral.

Loved the game until i got to the maids room. The HOG game in the room there is NO tusk to find even after hitting the hint button 7 times. When i looked it up on the internet it shows the tusk plan as day but it was not in my game. Now i cant get the bellows to stoke the fire to melt the silver. So now i cant finish the game. Very disappointed.

Jennifer -
Have you contacted tech support wherever you purchased the game?

So I have a problem. I started playing the game and everything was good until

I got to the crypt and i had to poor the antitoxin on the skull on the door, but i can't do that anymore because i clicked on it too many times and now the skull is gone