Originally made in just 48 hours for Ludum Dare and then tweaked and polished, Wolve's Hanoka is a simple yet gorgeous action-packed game of acrobatics and arrows, as you control a young woman who bravely dives beneath the waves her village sits atop to lure giant spirits to the surface. There, she can leap above the water and fire her bow at the creatures chasing her, before she plummets back down to try again. Use [WASD] to move, and the mouse to aim and fire, though initially you can only do so when our heroine is above water. As you slay the spirits, you'll gain experience points you can spend on opening new chakras, which can give you new abilities, or enhance the ones you already have. Available upgrades start from the bottom of the menu where they're displayed, with more options becoming available as you unlock others on the tree. The blue bar in the top left corner of the screen represents your experience level and how close you are to opening another chakra, while the red bar above it is your health. Health regenerates automatically overtime, but if you die, you'll lose a little experience (but keep your chakras!), and if you were in the middle of fighting a big spirit, you'll need to lure it back up and start the battle again. Don't forget to hit [P] to pause if you need to take a breather or want to change the volume! 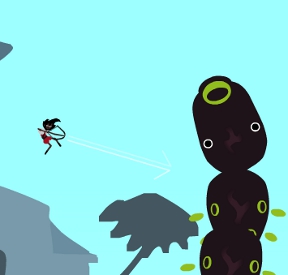 Despite its simplicity, or maybe even because of it, there's something sort of thrilling about Hanoka that calls to mind games like Shadow of the Colossus, and even, sorta, Radical Fishing. It's just you and your arrows against seemingly impossible odds, and the striking visual design and snappy soundtrack give the game an otherworldly atmosphere. For a game originally made in just two days, there's a tremendous amount of polish in Hanoka, and its stylized design is a real treat. The downside is that it doesn't always seem as responsive as it should... the main character does rarely stop responding to movement commands, usually when pressed against either side of the screen, and while I couldn't tell if it was a problem on my end or not, it was still obnoxious enough that it bore mentioning. There's not really enough variety to enemies to make you ever feel like you need to seriously vary your strategy, which can often be as simple as diving/swimming in one big circle to keep foes following you in a continuous, predictable loop. Once you've unlocked a few chakras things do become a lot easier, which can leave you feeling like you need to grind, but Hanoka's concept is still sound and a lot of fun, especially considering its short development period. Hanoka is a great little idea pulled off well, and definitely a concept we'd love to see expanded on in the future.

It would be great if there was a save function. I get that, as a Ludum Dare game, that's not really of utmost importance, but some IE thing (note: I use Firefox. I have NO idea what happened) decided to open itself on the same tab and I lost my progress at 3/4 boss spirits defeated and almost all upgrades unlocked. Kinda ragequit after that, although the game doesn't take too long and it's REALLY fun so I'll probably play again at some point and hopefully finish.

This game is simply unplayable. Clicking on the mouse to shoot does not work. In general games that use a mouse and arrow keys simultaneously do not interest me. I have used both Chrome and IE, and played both versions of the game to no avail. It was a waste of time.

Hello! Sorry you're having problems, but I promise you it isn't unplayable. I can confirm that the game works just fine for me to aim and shoot with the mouse, and as mentioned in the review, you should be using WASD, not the arrow keys. :) The game plays fine in Chrome, Firefox, and IE. Have you tried clearing your cache and restarting your computer?