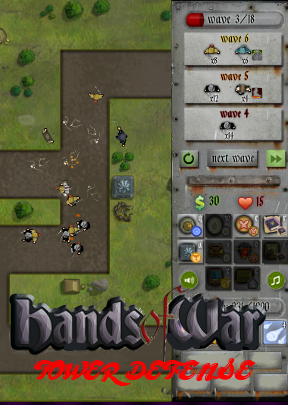 Following in the footsteps of other series like Castaway and Bloons, Axis Games brings their Hands of War RPG series into a new genre in Hands of War Tower Defense. Place towers! Defeat the enemies! Defend the lands! Okay, there's nothing earth-shatteringly new here, but what Axis Games has done, they've done right!

As a simple, lowly page, you have been given the Heartstone, a most powerful relic (which seems lifeless in your hands), and tasked to reunite the land of Tempor. Buck up, young man, it's time to prove yourself! After selecting a map to play, place the champion on the screen as the first 'tower' (warriors go on the path while mages and rangers go to the side, just like the actual units). From then on, you are free to spend your money to distribute the rest of the towers available to you, some on the path like the champion, and some along the sidelines, as in a traditional tower defense. Each wave is manually started with a click of the mouse, and once the enemies have appeared, you can sit back and watch the killings or stick your hand in and activate some of your mighty abilities.

Hands of War Tower Defense offers a neat storyline to go along with some great tower defense gameplay. The underlying game is on the easy side, but with all the handicaps available to add to a level, you can adjust the difficulty to your liking. Probably the strongest point of this game is the level of customization. Each unit's priority can be changed to just about any one you would like, and the champion, as the most powerful unit, has even more possibilities (I've got my eye on you, stealthed baddies!). You unlock levels a few at a time, so are free to play them in whatever order you'd like as well as replaying previous levels (for both more stars and the occasional challenge). It's a fun experience and one in which you'll likely drain a couple of evenings away!

Note that the warrior champion goes ON the path, while the ranger and mage champions go beside it. It's the first choice you make, and easily forgotten.

From the numbers, it looks like Mages get both more damage and fire more often than rangers. It's very infrequent that I used the full range of a ranger, where a mage couldn't cover the same ground. On the other hand, mages can't shoot stelthed, and their blast ability seems weak.

I was surprised at how fast it seemed I was progressing. But then, 1% to a stat isn't much either, it matters when it adds up.

Does the game maker have a relation to gemcraft? The "badge multiplier" reminds me of that game.

Played this the other day on another site. Beat all the regular stages and unlocked all the skills in the skill trees. But I couldn't finish the special quests on all of the stages as they required unlocking the final battle modifiers, and I think those must have been part of the premium content.

The most interesting aspect of this TD game to me was The Champion, which I would have liked to have seen fleshed out more.

@ Derek: Thanks for pointing out about where the different champions go! (Obviously I had played mostly with the warrior.) I'm updating my review now to reflect that :)

How do you unlock the Endurance Mode?

I'm surprised that this game hasn't received more feedback as it is a great game and I've played it through as far as is possible without paying for the premium content (which all the stuff with locks on - including endurance). Thumbs up (apart from the locks I guess)