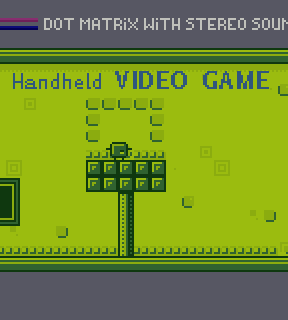 The chunkiness and weight of an original Gameboy will be familiar to anyone who's ever played one. Who knew the characters didn't much enjoy being put through an endless gauntlet of spikes and terror? Following the dialog in Folmer Kelly's retro platform game Handheld Video Game should clue you in on that, as, despite early enthusiasm, the little nameless main character wants nothing more than to escape the endlessly repeating levels he's trapped inside.

Using just the [arrow] keys to move and jump, guide your character through the 8 bit levels and perhaps help him find a way out entirely. Perhaps. You might prefer to keep playing. Most games would suffer a lot without their main character. Cute and simple, Handheld Video Game plays well as any 8 bit game of the Gameboy era, but the fourth wall breaking twist is a nice touch that sets it apart from others. It's short but worth the 5 minutes it takes to beat.

I must have hit a glitch or something, because I wound up in the ceiling blocks!

Hey, the same thing happened to me when I was playing Super Mario World on my Gameboy!

...that in the final level when you're about to hit the power switch, the switch is already in the OFF position?

Any way to turn off music?

To turn off the sound tap the minus key next to the 0 on your keyboard.