Lots of movies, books, TV shows and games try to scare people around Halloween. Instead of shocking you with things that jump out and go "BWAGGA BWAGGA!!!!", let's get a little more disturbing with a few adventure games that will make you question your sanity. Without further stalling for time and taking up valuable page space... Let's. Get. Scary. 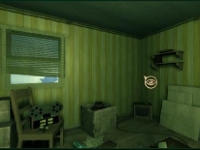 Heartland Deluxe (Windows, 24MB, free) - A dark adventure/room escape game with a movable, panoramic landscape. As reporter David Lawson, you are summoned to the apartment of local nutcase RJ Coombs. When you arrive, no one's there, and as any good journalist would do, you begin to snoop. Piece together clues left in the apartment with the simple point-and-click interface. 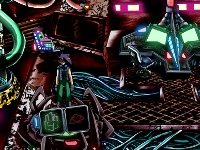 The White Chamber (Windows, 358MB, free) - Billed as a point-and-click horror game, The White Chamber features a host of puzzles and multiple endings based on how well (or how poorly) you do. While there is the requisite amount of things-bursting-out-of-things scenarios, for the most part The White Chamber is actually more disturbing than it is scream-like-a-girl scary. This isn't to say there's aren't moments of genuine fear, but The White Chamber thrives on putting you in situations that are uncomfortable and bizarre, all of which tie into the game's overarching themes. (Credit goes to Dora for that blurb!) 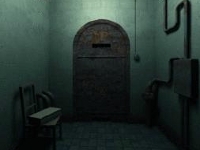 Unbound (Windows, 29MB, free) - From the same author that created Heartland Deluxe, Unbound is an adventure game in the same style as the above (it's a sequel, actually), only this time around things are much darker and more disturbing. Dr. Nicholas Powell has gone missing in the aftermath of the mysterious Project Caterpillar. Howard Fielding, the only surviving member of the research team, is being held in an abandoned government facility and interrogated by agents. Howard has the answers they seek, but he's keeping them to himself. Something has been awakened in his subconscious, and it won't remain hidden forever...

I'm completely stuck, any help appreciated. I have seen and touched everything that allows to.
I have

a wet sponge and a bottle of sodium carbonate

and I have listen and read everything I have found

[Edit: It may help to identify the game you're playing and asking for help with when more than one are featured on a page. :) -Jay]

Just ended Heartland Deluxe <3
It's pretty good
It's short and sweet.
And for you players, this may seem familiar

Where is that damned phone!?

Warning: You will need an unzip program for Heartland Deluxe.

While the files are compressed, they are self-extracting executables and should extract without any external programs.

Heartland Delux and Unbound were nice. Good mechanics, (after I found out right click changes the action) simple but not boring puzzles and the panoramic images worked GREAT with the style of the game. I've always wondered why people didn't use panoramic images more often in escape games.

The only thing that bothers me is the plot. Am I supposed to understand anything at all? It became boring to listen and read to all that non sense ramblings. I see this a lot in escape games, though..

Thanks for point what should have been obvious, Jay.

I was playing Heartland de luxe, but I have know been able to finish it.

I got the first couple of objects and not a clue of what to do.

You should probably toss in a disclaimer on the lovecraftian horrors and random gruesome dead stuff you run across (including yourself) in The White Chamber. I don't have any issues with it personally, but I can see where some people would get all up in arms over it.

This'll be my first attempt at writing a walkthrough, so bear with me.

Use the the tape player in front of you and then the right reel of it until you make a comment along the lines of "I don't know why he had these..."

Turn right (seeing a theme here?) and touch the cross

Continue right until you see the wardrobe. Examine, then try to open it.

Turn back over to the sink and examine the box under it, then use it. SCREWDRIVER GET!

Go back to the wardrobe and pick it open with the screwdriver. You have to turn on your speakers for this.

The tumblers are either open or closed, and they make a distinct sound based on whether they are in the right spot or not.

Get the picture, sponge (yellow brick) and plug (at the bottom) from inside the wardrobe, then go back to the room proper.

Use the sponge on the liquid sodium carbonate

Turn towards the TV. There is a typewriter at the bottom of the screen. Use it.

Oh no, it's the debt collectors! Well, answer the phone anyway

Look between the box of books and the tape player. The phone is at the bottom of the screen

Turn to the right and open the cardboard box.

Grab the duct tape (you ALWAYS need duct tape.) and the envelope. After you finish reading, drop the box.

Look out the hole in the top of the door.

Turn back towards the bed and grab some of the debris. Wood bit get!

Switch the valve to the right of the door on the same wall. It's near the bottom.

Use the control box.

Grab the metal bit on the bottom right. Metal bit get!

Combine the wood and metal in your inventory to get a thing. Use the duct tape on the thing to get a makeshift screwdriver.

Use the Macguyver brand screwrdiver on the panel

Turn around, and look at the chamber thing, then use it

Heartland:
How do you get the packing tape off of the box?

Try to open the wardrobe, then look at the box, then use the box.

Why you can't do this from the beginning, I have no idea. It makes no sense.

Nice use of panoramic views, but Heartland and Unbound both too short.

Not White Chamber: Too many movies which can't be skipped, boring.
The White Chamber: The download site they've put it on would not start the download on Google Chrome browser (Google's fault, not theirs). The game was starting to be good, until something happened when I activated the drone control software: The camera shows the burning man, but nothing works, I can't get out of the screen. Bug!

mkelican re: Heartland - I can't take the box. It just says sealed with packing tape, no way to take it. Yes I tried to open wardrobe first.

I can't get the White Chamber to download at all. Keep getting "Page load error" when I tell it to download from their off-site source.

For the drone and burning man in White Chamber

Took me a while to find it, and getting the drone there was a little tricky, but I was able to open the door on the right hand side of the screen. The drone and the burning man are sucked out into space. This allows access to the room since the fire is now out.

Hi everybody! This is my first time posting, though I've been having fun with jayisgames for a long time. Ok, I'm stuck in The White Chamber (great game), just a little further than Itt's last comment mentions.

I passed the drone chamber and got a VCR tape. When I play the tape in the video player, I see myself being tortured in the same room, and then the scene becomes true; while being tortured, I can get a Laser Cutter but it doesn't work and tried to use and combine each and every item in my inventory (or so I think) but I can't avoid death.

Any help would be appreciated. Thanks in advance for your time!

Forget it, I just got it (thought I had tried what finally did the trick). Thanks anyway!

Wooowwwww. On The White Chamber, I got the

Venomous ending. Totally unfair. D: Now I have to start all over.. When the fridge is hanging over that one room, I guess going into the room too much makes her die.. which.. sucks.