Ah, France... Hubert Keller, little animated rats, Les Misérables... oh, and the big angry Templar that just stormed in and sucker-punched you in your hotel room, of course. In Elephant Games' new hidden-object adventure Hallowed Legends: Templar, you fly in to France upon hearing your brother has gone missing, only to be ambushed before your investigation can really begin. You soon discover, however, it's not just one lunatic in a suit of stolen armor, and there might be something a lot bigger, and older, than you ever expected going on in town. 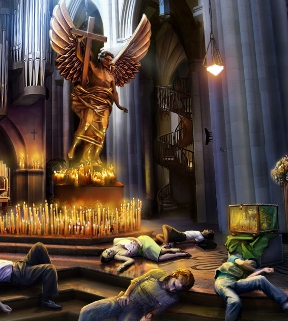 Hallowed Legends: Templar has three difficulty settings for those of you who prefer to tackle things easily or in a Bear Grylls-y fashion, and you can swap between them any time you wish by opening the options menu. You'll explore the town and the area around it searching for clues, gathering items and solving puzzles while trying not to cross paths with the knights you'll see prowling the area. The area has more than a few secrets, and there are quite a few people doing what they can to keep you from unraveling them.

Naturally, in addition to dodging attempts on your life, this also involves solving hidden-object scenes. Occasionally you may run into one of these where you have to use an item from your inventory to be able to get the item onscreen, so if you can't seem to collect something from the list and you're not carrying anything appropriate, you may have missed something you needed to pick up elsewhere in the town. Fortunately, once it's charged you can rely on the hint button to tell you explicitly what you need to do to proceed. 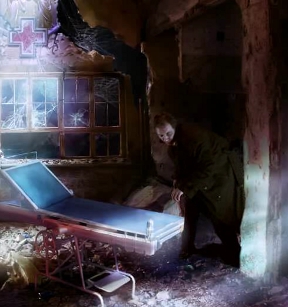 Analysis: For hidden-object adventures with real creativity and intrigue, Elephant Games is rapidly becoming the developer to beat. Hallowed Legends: Templar is a big, strange, engrossing game packed with strange characters, excitement, and even a bit of supernatural mysticism that sets it apart from other titles. Mixing recorded cutscenes featuring real people with beautifully drawn visuals and environments, it helps give the impression that you're in a movie. A slightly crazy movie best enjoyed with a big bucket of popcorn on the couch at three in the morning, but a movie nonetheless. The game is great at doling out tidbits of information that fill you in on what's happening, while events keep popping up to move the action along at a quick pace and keep you interested with new developments. The story itself is admittedly a little convoluted, but if you don't demand big, serious narratives and just want to enjoy yourself with something imaginative and different, this might be right up your alley.

Click detection is, unfortunately, rather temperamental; too quick and the game might not register it, and the place to click to pick up or use an item can sometimes be annoyingly small and precise. This can also factor into problems with hidden-object scenes, where the art style occasionally makes it difficult to tell what you're looking at. Are you clicking on the wrong item, or just in the wrong spot? Is that a candle, or a teacup? Then you also have a few instances of what might be called "muddy descriptions", such as "white chess piece" actually referring to something the stunted artist in me would call "orange-y beige-ish". None of this is game breaking, and it is something you become more adept at noticing the more you play, but it does feel like it interrupts the flow somewhat. It's also worth mentioning that some players (though not yours truly) have reported performance issues on different machines, so as always, make sure you try the demo before you buy.

Despite that, however, and a somewhat stiff written translation, Hallowed Legends: Templar is still easily recommended. It's over four hours on average, with another hour or more to play the bonus content, and throughout the game rarely feels like it's dragging its feet by trying to artificially extend the gameplay. It's silly, it's exciting, it's weird and imaginative, and it's just the thing to relax with when you're looking for something fun. Try the demo to dip your toe into it, and keep an eye out for runaway cars, crossbow bolts... and pungent cheese, which is just as dangerous. This is France, after all.

The Bomb in the Sewers

Click the board game to play the game the madman offers you. The goal is to surround the madman's pink gamepiece with your green ones. It's similar to Chat Noir. Hint:

Start laying your pieces far away from the pink piece, focusing on the direction it moves. That way you have a chance to build a suitable barricade before it arrives.

The Pirate's Chest—Escaping the Dungeon

Inside the Church—Getting the Grappling Hook

Key to the Town Hall Gates

Getting the Key and the Ruby

The Dam and the Altar

I say this all the time (and I don't see it changing any time soon) but why on earth do the written aspects get so badly neglected? "Somewhat stiff written translation" might be true of the beginning, but by the end (and especially in the museum portion) there are some sentences which are completely incomprehensible.

It just makes no sense to me, when they've spent so much time and effort getting the rest of it right. If you're into the genre, then this game has so much going for it. Everything you said about it being goofy and exciting is true and the use of inventory items in the hidden-object scenes is a welcome innovation.

But by neglecting the writing, which is surely the cheapest aspect, I came away from the game with an overall negative feeling. It just seems like such a waste for only a bit more investment.

They don't even need to hire a super translator (which I knows IS expensive). Any native English speaker could have got the gist and tidied up that translation and it would have cost peanuts, comparitively.

I played for the demo hour, a little disappointed by the hidden objects being in impossible/unusual places. Also the first puzzle is a retread of the annoying move one item three move variety. You'd think they'd lead with something more interesting.

The Bomb in the Sewers

Click the board game to play the game the madman offers you. The goal is to surround the madman's pink gamepiece with your green ones. It's similar to Chat Noir. Hint:

Start laying your pieces far away from the pink piece, focusing on the direction it moves. That way you have a chance to build a suitable barricade before it arrives.

The Pirate's Chest—Escaping the Dungeon

Inside the Church—Getting the Grappling Hook

Key to the Town Hall Gates

Getting the Key and the Ruby

The Dam and the Altar