Alright, so maybe your plane crashed on an island, but it wasn't really your fault since the weather forecast didn't say anything about flaming ghostly skulls. Then again, I'm fairly certain I've never seen a nature special about talking ravens who wear cute spectacles either unless Attenborough has been holding out on us. But you're dealing with both, and stranded on your own in a hostile land under a curse by the malicious specter of the woman in white, you'll need bravery, wits, and a whole lotta clickin' to survive and put a stop to the ancient evil once and for all in Hallowed Legends: Ship of Bones, another engaging, beautifully done hidden-object adventure from magic makers Elephant Games. 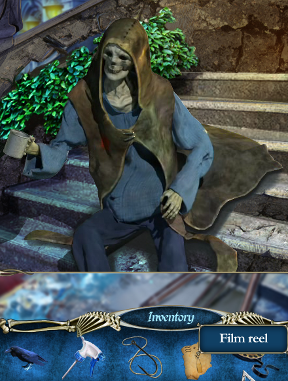 As you explore the island, you'll come across a lot of puzzles to solve and items that'll be of use, so it's lucky you can cram all that into your pockets. (Seriously, do they issue Bags of Holding to all adventure protagonists these days?) Most of the hidden-object scenes you'll encounter are filled with little puzzles of their own, asking you to figure out how to properly combine things or get past obstacles to strike off everything on your list. You've also got a handy map, which not only shows everywhere you've been, but will allow you to travel to locations at a click and highlights places where you can still get something done. But that's not the only tool at your disposal. Your raven friend can be used to retrieve things from high places, and even cooler, eventually you'll gain a magical book that can be used to burn away the woman in white's ice when you track down all the runes it gives you. 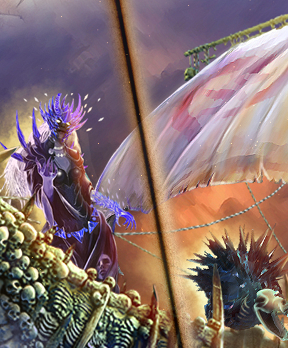 Analysis: Elephant Games is far and away one of the best developers working on this genre of games, and here yet again they prove it's possible to blend creepiness with adventure and excitement in a way that makes it enjoyable for... well, pretty much anyone. Is it goofy at times? Sure, but that's part of its campy charm, and the beautiful hand-painted design of most of the environments actually goes quite well with the live actors who carry along the cutscenes. Since the story is told through those rather than piles of notes and diary entries, as is the norm for most hidden-object adventures, the game winds up playing almost like an interactive movie in places. It takes a while to really get rolling, with the first bit bogged down with a lot of back-and-forth before you get to the titular (awesome) ship and find out more about the legend behind it all... all while trying to avoid getting savaged to death by a frozen hound, of course.

It's not perfect, though. Gameplay is fairly straightforward and not all that challenging, unless you count the finicky click detection a few items have in hidden-object scenes. Happily, while most of the object puzzles are simple "use item X on dude Y" scenarios, some of the puzzles require a bit of thought and brainwork, and the game strikes a satisfying balance so you won't be bombarded with hidden-object scenes either. The result is an experience that won't post much difficulty no matter what setting you have it on, but will entertain you every step of the way. It won't hold many surprises, but it's impossible not to appreciate the spectacle of it all and get pulled in by the beautiful design and imagination weaving it all together. It's a stunning adventure to wrap yourself up with for the evening. The tone never becomes all that dark or gruesome, but is still eerie enough to snag players who aren't all sunshine and puppy rainbows, and will appeal to fans of cinematic action with magical mystery that never lets up.