Living in the old wild west is hard enough without a money grubbing bad guy calling the shots. With no sheriff in town to keep things in line, our unlikely hero Incendio decides enough is enough after becoming inspired while reading Robin Hood. If he doesn't stand up to Boss Grimshaw, nobody will in Gunpowder, a unique puzzle game by Rogue Rocket Games for PC or your iOS device. Armed with a few good kegs of gunpowder, fire, and maybe some TNT for good measure, it's up to you to explode, burn, blow up and demolish your way to the hoarded treasure so you can redistribute it back where it belongs. Being armed is the easy part. The hard part is getting to the gold. 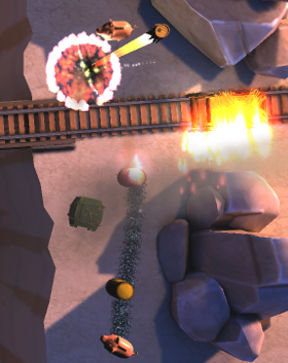 The goal is to blow up the safe located somewhere on each level, hopefully along with a few of Grimshaw's piggy banks as well. This is done with a variety of explosives either already on the screen or kegs placed from your inventory, all chained together by gunpowder. After you assess the level and place the barrels strategically around the board, draw a path of gunpowder and ignite it when you're ready. The amount of gunpowder you have for each level is shown at the top of the screen. If you make a mistake, just change to erase mode to sweep up your mess, or hit the restart button. Each keg has a blast radius, shown when you hit the blast button on the upper right. This shows how large of an explosion each barrel will cause, which is helpful because any gunpowder within a blast radius will start on fire. Piggy banks raise your score and are needed to unlock later levels.

Gunpowder is a thinking puzzle game at heart. You can take as long as you like and as many tries as you need to figure out how to get your paws on that money. If you want however, you can optionally try to beat the target time, which adds a whole different layer of difficulty and replayability to the game. Many levels also contain a secret trophy to uncover, so keep your eyes peeled for those. There's great variety in the gameplay. Sometimes you'll have to blow things up in a certain order, others it's a matter of keeping your flame alive while a wall explodes so you can get through. There's mine carts, cannons, chandeliers and boulders to manipulate, all which can help you reach your goal. Some levels do demand a high level of precision or speed, but on the whole you can take your time and even skip levels if needed. Points are awarded for exploding as many items as possible, speed, and also for how much gunpowder you have left at the end of the round. With art that would be comfortable in Loony Tunes, and explosions that would make Road Runner and Wild E. Coyote proud, along with a peppy wild west soundtrack, Gunpowder has a fresh feel and is great fun for all ages.