Everyone knows that to be an efficient freelance spy, you've got to have three things. One, a classy brown trenchcoat. Two, a pair of Hypertrousers that let you spring through the air like a human slingshot. Three, the wits to get the job done while dodging not only dangerous enemies, but also suspicious customers. Gunpoint is a stealth puzzle platformer by Tom Francis where you take on the role of freelance spy Richard Conway, trying to crack a perilous case in extremely elastic pants. 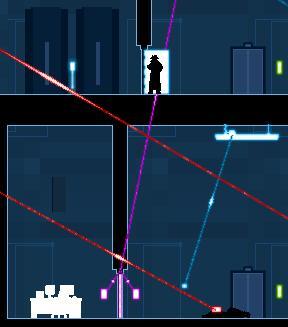 In each mission, your job is to sneak into a highly secure building, steal the intel that you need, and exit the map on the right side. You can move using [A] and [D] and navigate stairs and elevators with [W] and [S], but jumping while wearing your Hypertrousers means you'll go jumping far and fast; click and hold with the mouse to aim your shot. Sounds easy enough, but to reach your objective, you've got to get past a maze of locked doors and armed guards who shoot to kill.

That's where your gadgetry comes into play. Using Crosslink, you can rewire electrical devices to your whims. That light switch doesn't have to just flip the lights on and off, you can rewire it to open a door. That motion detector doesn't have to trigger an alarm, it could shock a guard through a nearby electrical outlet. With the right tools equipped, you can even make one guard pulling the trigger set off another guard's gun. Use the scrollwheel or [Alt] to enter Crosslink mode, and click and drag to connect devices, from the controlling device to the controlled device (order is important, you don't want ceiling lights to trigger a switch). Additional electronics can be accessed by equipping Wirejack and hacking access through terminals you've reached.

You're not the only one in the buildings though. Armed guards stand watch with guns at the ready, and a usually-deadly aim if you're in their line of sight. However, guards tend to have the same behaviors and reactions to events, such as turning when an elevator arrives on their floor. By learning their behaviors, they be exploited to trick the guards into opening doors for you, or even killing each other with rewired electronics. 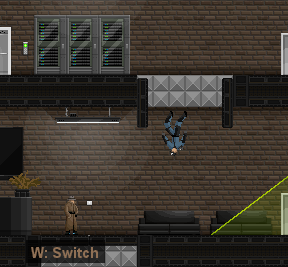 Analysis: It's important to note that the only requirement for beating the levels is that "get in, get the goods, get out" mantra. Everything in between is entirely up to you. If you want, you can go on a rampage and take out every guard along the way, or use your tools to completely avoid detection. You can grab the laptops to score a little extra intel, or make a speed run for a Steam achievement. There's technically no right or wrong way to finish a level, though some characters may give you a higher ranking depending on their espionage style preferences.

All of the gameplay of Gunpoint is framed in a series of communications between Conway and his many clients. While keeping some of the names and alliances can sometimes be a bit confusing, the overall story is intriguing. The choose-your-response segments give the game an interesting twist of letting you bluff your way around dodgy questions, even in some instances where it doesn't affect the story much.

Gunpoint isn't the biggest stealth game out there, and some of the levels might be a bit on the easy side, but the replayability and versatility of its design make it a fantastic play, ideal for perfection-runners and meta-gamers. All of this is wrapped in a Philip Marlowe-style old-time detective story, complete with the shady-alley atmosphere and vibraphoney blues riffs to go along with it. Grab your trenchcoat and plunge into one of the cleverest noir adventures around.

Windows:
Download the demo (scroll down for links) Get the full version

I just bought this to play for myself and was coming here to see if anyone else felt the same way, themesser! Really reminds me powerfully of a more comedic Art of Theft.