Look out, Axe Cop, there's a new weapon on the streets, Gunbot. And his story is just as loose and strange. Y'see, Gunbot has this sister who's a beetle and she loses this purple stone with a golden lizard on it. I think this guy, Gronkomeau, stole it. And Gunbot is going to get it back the only way he knows how. With guns. But believe me, the story isn't why you'll want to play this game.

Gunbot is a platform shooter from Berzerk Studio where you'll do the usual robot stuff, like collecting stars and shooting dinosaurs. You'll control Gunbot with the keyboard and fire with the mouse. As you take down enemies you'll get experience to level up with, and you'll gain skills like double jump or firebomb. Your foes also drop money which you'll use to buy guns. The guns have different stats and features like tri-shot or bouncing projectiles. Make sure you also pick up a new shield every so often, they give you more health and various bonuses.

Levels are primarily about getting to the end alive, but you can also hunt down all the stars for a money bonus. Don't worry if you don't make it out alive, you get to keep the money you earned before you died. At the end of each of the three worlds, you'll be pitted against a boss. After you take down each boss you'll be treated to a humorous cut scene that advances the plot. Not that the plot matters, but that's part of the fun of Gunbot along with the running, jumping and gunning. Oh, and avoiding water. You don't want to fall into the water. 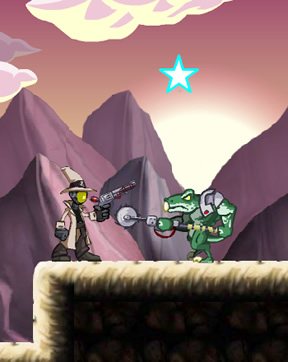 Analysis: Gunbot is fun all the way around. In the beginning, the levels are short and offer no challenge, but they quickly get longer and tougher. The difficulty stays at a nice level all the way through. You might buy a weapon that will let you breeze through a few levels, but it won't be long before things get harder again. It's never so hard that it becomes frustrating, but you won't get through the game without dying a few times. If you ever hit a snag, you can always go back to a level to get some more money and get yourself a bigger gun.

While the controls are simple and smooth, the cliff grabbing ability doesn't work very well. It's never that big of a deal, but one level requires it of you at the very beginning. Aside from that, the only weak points are in how quickly you'll max out your experience and in the graphical design. Gunbot and the still-image cut-scenes look good, but the levels are pretty bland. On top of that, there's not a lot of variety in the enemies. There's about five of them, not including bosses, and later they're given a simple color change treatment. Granted, you'll be too busy racing through the levels and mowing down gun-toting dinosaurs to care, but it'd be nice to face some new baddies as you move from world to world. On the other hand, there's a lot of variety in gun design and I never got tired of Gunbot doing his gun spinning reloading trick.

Gunbot has pretty much everything you could ask for: it's funny, the difficulty increases smoothly and the gameplay is fun. The game is just long enough that it doesn't get old, but that you get your fill of robot gunslinging action. The star gathering bit seems mostly superfluous, but if you miss one it gives you a reason to go back to a level and get some more cash. Gunbot is even more of a treat for those of us who crave games with a Western flair. Now, get out there and find that...thing you're supposed to find, but remember: do not shoot with your hand. Those who shoot with their hand have forgotten the face of their father. Shoot with your mind.

Hey I love this game and good review. Loved the dark tower quote.

Hmm, somehow I prefer playing the breach than this. Just play until like stage 1-7 or something and feels bored.

I agree rosedragon, the game does drop off for a bit and there is an amount of grinding necessary. The baddies are mostly constant with varying degrees of difficulty. Once you reach the end of the second world, everything becomes frantic and fun again (for me). The third world is insanity.

especially with the introduction of seeker missiles

I haven't finished but I say stick with it the rewards are there (imho).

Neddo - the game is also on Kongregate.

Wow, saw this game earlier today on newgrounds and played it through. I didn't get all the stars but I got the best gun and shield to finish the last level.

I probably took 4 breaks (long ones) but it was a good way to spend Labor Day evening.

Decent game. Worst mouse controls I've yet encountered in a platform-shooter. There are all kinds of intermittent discrepancies between cursor movement and the character actually moving his reticule. Not just lag. He sometimes just keeps pointing the wrong way for several precious seconds, often also taking it as the cue to begin running frantically off the screen on his own independent volition.

I really wasn't a fan of this game.

Best thing about the review is the Dark Tower reference there at the bottom. This game isn't worthy of it. :P

"premium features" and achievement that requires you to bother your friends and violate your privacy = not happy, actually quite enraged

Reminds me of The One Electronic.

I'm stuck on level 2 of the 2nd world. I can run all the way to the right until I hit a really tall wall that Gunbot can't jump over. Any suggestions?

Brad, I may never forgive you for exposing me to the insanity that is Axe Cop...

I am stuck on Level 1-8 how do you defeat the blue boss?

A gun-toting trigger-happy robot, that has a green ghost-like dressing beetle for a sibling, shooting the most random creatures to kingdom come, in order to find a purple artifact? We should make a movie out of this!

I love games that make you feel certifiably "Bad to the Bone." With the rockin' music, epic guns, fancy flips, and a wicked-awesome trenchcoat, this game accomplished that.

On the downside, I pretty much had my fill by the end of world 1. Lacks variety in scenery and enemy design.