From Size Five Games, the team behind Ben There, Dan That! and Time Gentlemen, Please!, comes a game that's pretty much nothing like those games. Gun Monkeys is a multiplayer arcade arena shooter that pits monkeys against each other as they fight over energy cubes. It's about as ridiculous as a premise as you can have for a video game, but it's also very well-balanced and easy to get into, especially if you start up a "friendly" competition with a couple of friends. 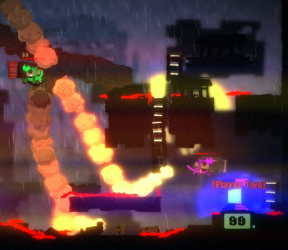 You wouldn't normally expect the story to be a highlight of an action game, but with the Size Five crew on the job, something twisted is at hand. Mankind has invented a perpetual energy device, you see, but when it was switched on it kinda destroyed half the stuff in the universe. Energy now condenses into convenient little cubes that fall out of midair, but the problem is this only happens in the future, not in the present. The solution: send monkeys into the future to collect the energy cubes and bring them back to us!

In Gun Monkeys you'll jump, crawl, shoot, wall jump, place bombs, accidentally step on your own mines, and just generally cause a bunch of carnage in each small battle arena. As you bring cubes back to your power core, your score goes up and your opponent's goes down. The first one to zero loses. Levels are procedurally generated and always give you different layouts to work with, though at the end of the day it's all about which monkey is the better shooter/power cube collector.

Gun Monkeys is a straightforward game that doesn't deviate from its arcade arena roots. There are a few power-ups that can turn the tables by letting you do things like shoot through walls, and winning matches earns you coins that can be spent on long-term upgrades. However, these features are secondary to the game's main focus of intense, bloody monkey action. Get a good feud going with someone and you'll never be bored again. A fantastic sense of humor and a good looking game to boot, Gun Monkeys is the next best thing to actually sending monkeys into the future.

It's listed as both Windows and Mac on the Steam page. Or were you referring to the missing Mac link above, which I stealthily just fixed? :-)