Warning:This game deals with a theme that some may find triggering. Please look to my comment for more information.

Lost and alone in the dark woods, our heroine must find her way to sanctuary. With the strength to pull herself up onto the muddy cliffs and the will to descend into the dark caverns, finding a way out seems to be a feat feasible until she runs into mysterious goo-like monsters who are seeking her out to devour her very soul. GUILT by Ylzor is a chilling free indie horror game of stealth where you must find a way to pass the monsters without gaining their attention, or at least be quick enough to escape once you are spotted. The woods seem almost endless, and the caves so vast it will take all she has to keep moving even as she is being haunted. This dark tale will have you in goosebumps, as well as breaking your heart when the real story unfolds. While the difficulty is a tad frustrating and so is not for those with slow reflexes, GUILT is worth all the time you put into it and all the restarts you'll have to take. But in the end while you'll be happy the terror is over you'll find yourself wishing there was more. 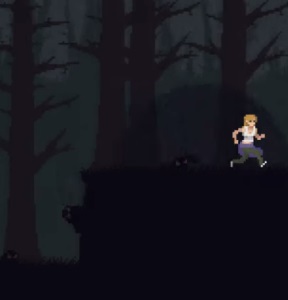 GUILT is meant to be hard, with tricky situations and trying jumps, which itself takes a bit to get used to. While you move with the right or left [arrow] keys, you climb and jump using the [spacebar]. Unless the ledge you're climbing on is over one block high, for taller ones you must hit the [spacebar] to grab on and then the up [arrow] key, or the [spacebar] again, to pull yourself onto the ledge. This isn't that much of a problem, but when you're being chased it can be a difference between life and death if you switch up the wrong button or hesitate too long. It's easy to get caught as well, because it's not shown how far the monsters vision goes. Sometimes it's pretty obvious where you can shield yourself from their sight, but others you just have to guess. Thankfully, entering a screen and pulling switches will make a respawn point so you can always try again. Just remember that if you died after pulling a switch you'll have to re-pull it, as whatever it changed will have reverted back to how it was before. Another thing to watch out for is your noise level. Walking, jumping, and landing will all let out a sound which is represented as a shaded half circle. Any noise that reaches the goo monsters will have them come racing to you and you'll only have a small chance to run away.

While there are no jump scares GUILT does have some heart pounding moments. When you're are spotted the music gives a large warning which is a scare all in itself, but the sound is really needed to know if you been spotted, as you have to react fast if you want to live. But the other part of this game that will give you a chill is the story. It's one that, while never fully stated or spelled out for you, isn't hard to understand. It will also stick with you for a while, and might possibly leave you in tears. The creepy atmosphere also has a heavy foreboding feel to it and it's well deserved. The only issue is sometimes the sprite of the heroine looks a bit too casual for what is happening. Her walking movements could almost be described as strolling. It breaks up the mood a bit, but when the action really counts she automatically goes into stealth mode or will start running without you having to do anything and then the pressure is back. However despite the slow walking movement, the ending has such an emotional powerful punch that it's worth putting up with the incredibly difficult areas of the game. So gather up your courage and step out into these dark woods because GUILT is one stealth game you don't want to hide from.

Knowing this spoiler, to me, would make this game emotional ending lose most of it's power.
This game deals with content that isn't what we usually warn about. To cover most of the typical concerns it's not sexual/physical/emotional abuse or suicide (what we usually tend to flag).
If that was what you were worried about I encourage you to enjoy the game and for those who are still worried this game deals with

the abrupt death of a baby who then haunts the mother.

This game optimizes the stealth mechanic in a great way and tries to tell the story of it's title "Guilt."
The gameplay is enjoyable, short and just the right amount of difficulty, but I'd like to touch on the topic of story.

When dealing with stories, it's important to remember that when using allegory, it's prime function is to show the key piece elements which represent the "whole" of the truth, much like a jigsaw puzzle.

In Guilt, we find ourselves awaking in a dark rainy forest trying to find our way home. We soon encounter dark blobs with glowing eyes which we need to stay hidden from, lest we are attacked and are unable to progress. The main notable moments of the game are when we discover: the Bus, the Park, the wolf, the rooms and the final 2 moments.

Upon completing the game, it's up to us to piece together the puzzle which sets the stage. (there is a point to all this)

The conclusion I drew from the game was that we are a bus driver, whom was driving children through a dark and stormy night. We swerved in efforts to avoid hitting a wolf, and the consequences of this crash would be detrimental as we may be the only survivor. while being chased by the globs of guilt/ spirits of the recently deceased, we are helped by a wolf, presumably because we saved it's life when we had swerved from hitting it. After parting ways, we are met with 3 rooms that show different timelines, almost as if it were saying that these are the lives that would never have the chance to grow.

Now, would this analysis be accurate? Or would you disagree?
There might be a disconnect between the imagery and the message which is trying to be conveyed. Emotional Guilt is a rather interesting emotion to use as a tool, but it needs to be fleshed out in a manner of "cause and effect." The Effect of the incident is the game, but the cause? That's the mystery we need to piece together.
Emotional guilt derives from a moment in time where there is an opportunity to make a choice, whether it's represented by "Action" or "Inaction."

While this is a great game, had the final product utilized(or made more apparent) this notion of the protagonist's "Action" or "Inaction." It would have helped build a more successful imagery of WHY the guilt exists in the first place.

Thanks for the great comment Ruesiken. But please remember to use spoiler tags! I've fixed it for you, so no worries. :)

Here is my take on the story

Near the end of the game, just before some of the bigger secrets are revealed our Heroine comes to a road, stops, lays down, and falls asleep. It's just for a quick moment but I believe this telling us the reason behind the accident. Now I don't know if she is the bus driver or in another car but I assume one way or another this caused the crash. I think the dark monsters are the people on the bus, adults and children alike.

They are angry with her and chasing her but she is able to escape this guilt. But at the end she confronts a guilt she cannot escape and that is the death of her unborn child (represented by the fetus that appears and overwhelms her).

When she wakes up at the end her arm moves across her stomach but there is no longer any life growing inside of her. All lost because of a few seconds she had her eyes closed.

Now this last instance is just a few pixels so it could be seen in other ways.

The maker has told people while they had a story in mind while creating GUILT it is now up for us to interpret, which is why I think this game is so great. You make up an instance from a few slight events and you face down the guilt you create.