The world of creativity games continues to expand, but this time it's on mobile devices! Growtopia, a combined effort from Robot Wants developer Hamumu and Dungeon Scroll creator Robinson Technologies, strips out a lot of the complexities often found in creativity games like Minecraft or Terraria, allowing you to build and decorate your own little world that goes wherever your mobile device goes. Bored on the bus? Growtopia! Don't wanna listen to your boss droning on? Growtopia! Entire evening free? GROWTOPIA! 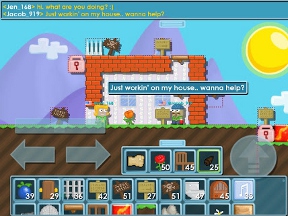 Growtopia is built on the idea of planting and splicing seeds, collecting gems, and building a custom world for you and your friends to inhabit. Use the on-screen arrows to move and jump around the sidescrolling landscape. Your inventory neatly slides up and down using the tab at the bottom center of the screen. Simply tap an item and tap the playing field to use/place it. You gather and destroy things using the almighty punch, an ability that functions by selecting the fist and tapping nearby areas on the screen (or using the action button). It all works quite well in practice, and after a few minutes of running around and digging, you'll feel like an old pro.

To really kick the game off, your first tasks will involve digging in the soil for dirt seeds and gems. As soon as you have a dozen or two gems you can nip over to the shop and purchase a package of five random seeds, giving you something a little more creative to play around with. Seeds grow into trees that mature in real-time, some taking a few seconds or a few minutes to reach harvest, others taking hours or even days. Each seed and item has a rarity score from one to 100, one being as common as dirt (literally) and 100 being the metaphorical Holy Grail. You can combine seeds by using a seed on a freshly planted crop, but not all combinations will work. The Growtopia wiki has a nice list of recipes you can work from, and more are being added all the time. 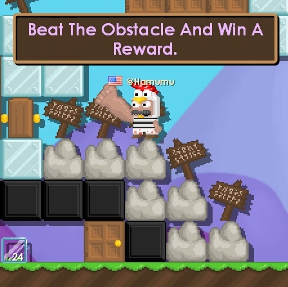 Analysis: Creativity sandbox games that actually play well on mobile platforms are a relatively rare thing. Not only is it difficult cramming virtual controls onto a small touch screen, but the logistics of online connectivity can cause all sorts of trip-ups. Growtopia deals with both problems elegantly, giving you some simple tools that work really well with either virtual buttons or by tapping the screen. The complexity of gathering and crafting things is also curbed thanks to the seed system, which has the side benefit of encouraging you to stay loyal to your home world with its little farm of proto-items.

There's not very much to "find" in Growtopia, not by digging or exploring the small landscapes. Most of the new items you get will be obtained by purchasing seed packs, trading with other players, or by splicing seeds. While it's a bit of a bummer not having the exploration incentive, Growtopia is much more a game of decorating and socializing rather than mining. Being able to create your own persistent worlds is great, and if you can gather a group of trustworthy pals, you can build some really fun things. 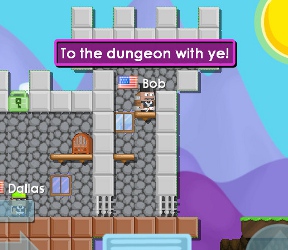 Earning gems can be a bit of a hassle. Since spending gems is the speediest way to get new seeds, you'll probably feel compelled to dip into an in-app purchase or two. That's not necessarily a bad thing (game developers need to eat, too!), but the process of earning gems and items through normal play feels a bit slow, almost turning IAPs into a requirement. There's the option of completing some (mostly) free offers for no-charge packs of gems, which does speed things up a bit. Usually it's something painless like downloading and running a free game from the marketplace. Microtransactions or no, nothing gets in the way of having a good time in Growtopia.

Simple and easy enough to work on the mobile platform (and be fun for kids), but with enough room for customization and socialization, Growtopia lends itself well to quick play sessions that lead to grandiose worlds filled with structures of your own creation. Don't be afraid to work with other players or explore their worlds, either!

If they made a 3DS version of this game, I'd defintly buy it.

I never got a chance to play. I only got to open it. It wanted me to get an account or log in or something and never loaded anything to do so. Looked promising. Maybe I was just doing it wrong.

Sounded interesting so I downloaded it, but I can't add an account as the keyboard won't work. This also means I cant create my own world, start an account to earn gems or do any other fun stuff.

Also, JIG, can you tag games that are online only - I normally play on the train so I don't always have a connection.

That's a good idea. I'll pass it along to the mobile team. Thanks! :)

hey guys. i have a problem in the game which is i cant type. i am using galaxy y . ive posted a comment on the store but the f!ck!n game owners just ignores me. ive posted like every update. i got addicted like all players did. i admit that the game i so cool. now my phone got confiscated by mom cause she saw me playing 3 AM and i have to spend 2 more days to get it back LOL. my name is helloseth_556 which i got from the world helloseth, idk how the f did it change from flash tooth_556. another problem is when i exit a world the first 10 letters of the world only appears. so now my current world is carrotwarr from the world carrotwarriors i think?and another problem is the world that i created doesnt stay on the world selection screen. ive observed it on the pc version. sorry if i said bad words its just so annoying that owners dont help me. thank you guys for reading. if you guys are friends with Seth A. Robinson or with Hamumu pls tell them to read this. thanks . hope you guys can help me with my problems

Note:if you guys saw me running arround your world . I AM NOT A NOOB! who knows i am richer than you.:D

So, first off, the community is partially toxic, judging and says "lol" when you price something different.
The age option is absurd and pointless, since you can change your personal options anyway.
Players of this game are people you can't trust due to the absurd amount of scamming that happens within a single world!
this game is basically left in ruins thanks to the community, there should also be an option to change your language if some people don't speak English, otherwise they are just stuck in confusion of what the text options are giving an option for.
Overall, I'd give this game a 4/10, it's very sad how this game with so much potential, that I have played for over 2 years, has just been left to crumble and die.