Ever feel like you're a little too large for the world around you? You know, like when you're crawling through the air ducts of your home pretending to be a spy. Well, Smudged Cat Games, creator of Gateways, thought that feeling of mild claustrophobia would make a good game. And wouldn't you know it, they're right! Growing Pains is an arcade platform game that's all about getting to the exit as fast as you can. It's sort of like a speedy version of N, only instead of being a small ninja, you're a creature that can't stop getting bigger. 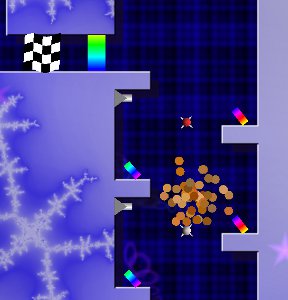 Levels in Growing Pains are laid out in a series of rooms, each one filled with glowsticks you must collect in order to move to the next area. Grabbing those little rainbows means hopping, wall jumping and avoiding enemies with perfect precision, as a single hit forces you to start the room over again. The size changing mechanic puts a new twist on things, as well. You're free to make yourself bigger at any time, but the larger you are, the easier it is to get hit/stuck. You can shrink yourself, too, but a stamina bar limits how much you can do that. In other words, stay small as long as you can, which means never taking a pause to admire the scenery.

Right now, Growing Pains comes with a small handful of levels and features a global high score board showing everyone's best times across all three difficulty settings. You'll be amazed how fast some of these players are. Steam Workshop support is coming soon, opening up level creation and sharing to the community. You know what's going to happen at that point, right? Insane levels, and lots of them!