Grim Tales: The Wishes is the third in the series of Grim Tales hidden object adventure releases from Elephant Games. Featuring an absolutely chilling storyline, Grim Tales 3 plays like an epic tale filled with puzzles that are sprawled out across the detailed landscape. Items and points of interest are practically in every corner, and while you search for the pieces you need to continue through the game, a surprisingly terrifying plot is unfolding right before your eyes. 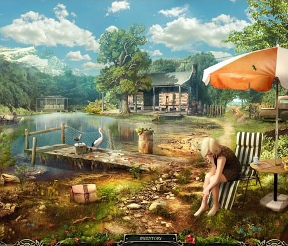 Brandon is having a rough time, what with the demons and witches and all. His mother notices he's been acting strangely lately, mumbling something about paying for his sins, setting wrongs right, and, oh, there's the whole looking like a pale-faced centuries old corpse thing, too. That's when you witness the chilling scene where a shadow creature erupts from the closet and takes Brandon away. You rush to inform Brandon's mother, your sister Luisa, but she's vanished, too. Now that your blood is flowing, get ready for an intense storytelling ride.

Grim Tales: The Wishes shares some basic design points, story elements, and characters with both Grim Tales: The Legacy and Grim Tales: The Bride, and the similarities are all very welcomed. The game is structured like a casual adventure with a dozen or more rooms to explore at a time, each littered with puzzles, mini-games, and a hidden object scene or two. To gain access to certain areas or solve certain riddles, you'll need to pick up items and carry them around in your inventory, often hunting for most of a chapter before you get to solve a puzzle you saw early on. It's a bit overwhelming at first to see all of these unsolved mysteries and have no clue how to complete them, but the plot of Grim Tales grabs you from the start, so while you're feeling a bit lost, you'll also feel a bit intrigued as well. 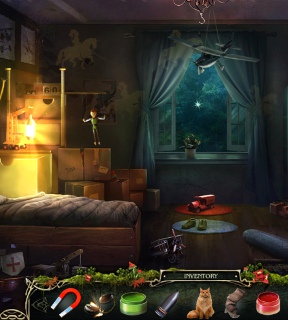 Analysis: Grim Tales: The Wishes is the perfect way to do a sequel. Elephant Games kept only the most desirable elements from the previous games while bumping up the immersion and puzzle challenge, two things you rarely see done so well in the casual hidden object genre. If you have a high definition monitor, you'll also get treated to some fantastic visual effects along with a few surreal animations. When you first lay eyes on the living puppet, you'll know exactly what we mean!

One thing Grim Tales: The Wishes mercifully offers: three levels of difficulty. As with many hidden object games, you're often presented a choice between casual and expert modes, adjusting the hint timer, cursor changes, and those telltale "sparklies". With Grim Tales, you get three modes, the easiest of which offers loads of hints and suggestions, while the hardest takes away the hint feature altogether, doesn't allow you to skip mini-games, and gives you absolutely no clues during play. You may not think much of this at first, but when you see that Grim Tales is a difficult game even on casual mode, you'll realize this game actually has the ability to challenge you!

Its name may not carry the weight of bigger franchises like Drawn or Mystery Case Files, but Grim Tales: Three Wishes deserves a spot on the top shelf. You know, if your computer had shelves and if the location of those virtual shelves had any meaning. It's an outstanding casual adventure experience with balanced gameplay, excellent visuals, and a story that just keeps twisting and turning as you play.

Chapter 1: Arrival at the House

Boathouse and Gap in the Road

Boat Dock, Gap in the Road, and Ambulance

Bottom of Well and Lumberjack Camp

Kitchen and Hall above Kitchen

House in the Crystal Ball

House in the Crystal Ball and Gray's Attic

Congratulations! You have reunited the Gray family and destroy the demon by completing Grim Tales: The Wishes.

Chapter 1: Arrival at the House

Boathouse and Gap in the Road

Boat Dock, Gap in the Road, and Ambulance

Bottom of Well and Lumberjack Camp

Kitchen and Hall above Kitchen

House in the Crystal Ball

House in the Crystal Ball and Gray's Attic

Congratulations! You have reunited the Gray family and destroy the demon by completing Grim Tales: The Wishes.