Magic and mystery, much to the displeasure of many, is not as ever-present as is should be. On one hand that fact makes reality seem far too dreary, but on the other, it might be for the best that power of that nature isn't lurking around every corner. In the newest installment of Elephant Games' Grim Tales series, Grim Tales: The Stone Queen, this is made very clear. In this hidden object puzzle adventure mystery game, it's easy to realize why magic and supernatural powers can be a grim alternative to the mundane normalcy of bill paying and chores. 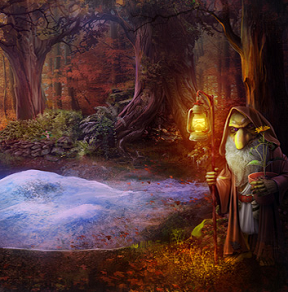 It all begins in Stoneville where you're about to meet your nephew. Yeah right, since when does anything go as planned in a hidden object game? Instead of finding him happy and healthy, you stumble upon something bizarre: people are being turned to stone by a woman known as the Stone Queen. To add the extra cherry on the top, your nephew is on the verge of death whilst being cradled in a bed of crystals. The once charming town that was protected by the Stone Queen is now the unwilling victim of her fury. It's up to you to figure out why she's off her rocker with rage and hope that once you find out, it will help you cure your ailing nephew.

After you've chosen a difficulty level and started your adventure you will encounter a smattering of mini-games and hidden object scenes that will help you obtain inventory items that will assist your enterprise. Your inventory bar is collapsible so it won't interfere with your view of the surrounding area, and to the right of the bar is your interactive map that will allow you to jump between scenes. 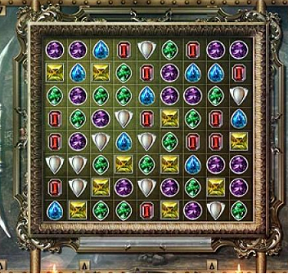 Analysis: Unlike previous games in the Grim Tales series, Stone Queen takes a story twist by focusing on the villain more than the family. This doesn't keep the story from touching on the familial bond or the strength it can provide, but it offers a greater dimension for relationships by showing more than what you might expect. The greatest shock of all is the very obvious lack of achievements and collectibles that have become a standard of Elephant Games releases. It's not a point against the game, per se, just a bit of a head scratcher.

Despite a few questionable tweaks in the otherwise perfect formula, Grim Tales: The Stone Queen offers the same great experience as previous releases. Each scene is crafted with a touch of autumnal beauty lending the game a solemn yet sensational atmosphere. To add the perfect sprinkling of magic there are creatures that will assist you or detain you, but nevertheless intrigue you with each new appearance. While it's hard to say for sure whether this is better than any of the Grim predecessors, it's easy to be certain that Grim Tales: The Stone Queen is a glorious game that is worth the number of hours it will take you to devour it.