From ERS Game Studios, creator of Haunted Halls: Green Hills Sanitarium, PuppetShow: Lost Town, Redemption Cemetery: Curse of the Raven, and a number of other games, comes a hidden object adventure that takes place in old Italy. Grim Facade: Mystery of Venice is a dark, atmospheric game populated by empty streets and moonlit statues, strongly punctuating the shaded character you're chasing after: the man in the mask. 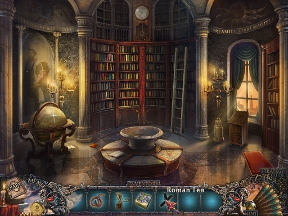 Grim Facade begins with a wonderful bit of intrigue that will undoubtedly grab your attention. It's dusk, and two rich young ladies dressed in ornate gowns are stepping down to go for a gondola ride. Piloting the boat is a tall man wearing a long black coat and the mask of the Venetian Plague Doctor. He invites the women to come aboard. As soon as they pass under a bridge, all three people vanish, leaving the gondola empty as it hangs on the dark waters of the canal.

The next thing you know, you're being hired by the father and husband of the women to investigate their disappearance. He pays you a few coins, but you quickly realize you've been followed. The masked man peers through the gate and runs, so you follow him as quickly as you can, solving puzzles and gathering loads of inventory items in the process.

As you pursue the man through the streets of Venice, he'll sabotage your path by any means possible. This leaves you in the lovely position of puzzle solver, gathering bits of evidence here and there, solving a few quick hidden object scenes, and carrying items back and forth as you attempt to make some sense out of this strange place. Most of Grim Facade's puzzles are simple and have logical solutions, such as using a crowbar to pry a cobblestone from the ground, but finding the items you need requires a sharp eye and a bit of exploration. 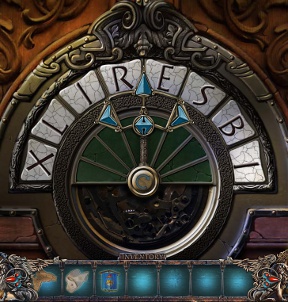 Grim Facade is built on a casual adventure backbone, leaving mini-games and hidden object scenes scattered here and there as diversions from the main investigation. You'll find items hanging around various pieces of scenery quite frequently, and there are lots of areas you'll need to examine, encouraging players to be stalwart in their drive to look through the game's every nook and cranny.

Analysis: Distinguishing yourself from the parade of hidden object adventure hybrid games is a lot like trying to be that one special puppy in the store window. You don't want to stand out too much or you'll risk being ignored by your potential audience (too "weird"), but if you don't try something different, you'll just sit there looking all doe-eyed and morose. ERS Studios' solution? Unique setting not usually seen in casual games. Storyline that paints a slow but intriguing mystery. Artwork that belongs in a frame on your wall. And puzzles that are tuned precisely to the level of challenge casual adventure game players seek.

Although the setting is certainly appreciated (as is the game's quiet nature), Grim Facade feels muted throughout, almost as if it were afraid to come out and play. This isn't so much a drawback as it is a fact, as you'll enjoy playing but will constantly wonder why the game is trying to hide from you. ERS wasn't afraid to take some chances with an unusual sort of storyline and setting, but the gameplay sticks to the rails a little too closely, never jumping aside to provide the exact kind of moderately innovative adventure experience Grim Facade was poised to bring.

An enjoyable and strongly atmospheric game, Grim Facade: Mystery of Venice is like a playable graphic novel filled with mystery, strange people, and a city that could be a character on its own. The gameplay is pretty much standard for a hidden object adventure game, but the presentation makes up for that lack of creativity to keep you loving the game from beginning to end.