Remember 2002? Back when the Mars Odyssey space probe began mapping the surface of Mars. When Antonio Meucci was officially recognized as the first inventor of the telephone. Eclipsing these events by sheer level of awesomeness and benefit to humankind, 2002 will be remembered for Jeff Minters originally releasing gridrunner++ for PC. What a world we lived in. Flash forward seven glorious years to 2009 and Minters' Llamasoft has just released Gridrunner Revolution. Despite having little, if anything, to do with grids or running, it does have plenty to do with sheep and curry. Oh yes. 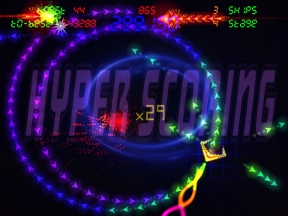 You play an unnamed little spaceman, alone and braving the neon, explosion filled depths of space. Suddenly, enemy ships approach. Do they want your ship? Your knowledge? A key piece of technology you have? Nobody knows. All that we can be sure of is if you blow enough of them up, space sheep wander on to the screen — and you can collect them.

The controls for Gridrunner Revolution are customizable, which is handy given the amount of buttons needed to keep track of. Of course, using the mouse eliminates most of the additional keystrokes needed, as the mouse (with scroll key) can be used to aim, move, rotate and switch ships on its own — hybrid keyboard/mouse controls are also an option, which means you can blast, explode, doge, duck, weave and collect flying sheep and space cows all within your comfort zone, which makes life a lot easier for our heroic space man (or woman).

The good news is, should you meet an unfortunate demise, you have several spare ships that can be utilized to take up the good fight where you left off. What's even better is that, temporarily, your now-lifeless ship becomes a projectile weapon all of its own, with an ability to destroy enemies before it exits the screen. Should you be able to maneuver the careening ship to a wandering sheep, your life is instantly rejuvenated and the battle continues unheeded. Whoever said death is the end, and reincarnation is a load of hogwash, clearly never collected a space sheep wile playing in Vindaloo difficulty. Because, my friends, this is proof positive that miracles do happen.

The interesting thing about the game is the number of ways you can be killed. Mostly this involves getting hit with an enemy bullet or colliding with an enemy ship. But no, this is not all. Firstly, suns and black holes appear which have the power to curve your bullets. Shooting around corners is one advantage of this — entering loads of ammunition into an orbit around the astronomical figure will increase your score multiplier and cause everything to glow like crazy. Eventually the sun or black hole gets tired of the affair and decides to shoot back at you. Meanwhile dead enemies drop flowers which explode if you fail to collect a sheep, but the unexploded flowers can be fed into black holes. Somehow, this all makes sense when you're playing it. 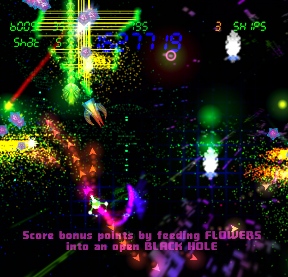 Analysis: First and foremost, this game is exceptionally visual, featuring many blinking and unpredictable neon patterns against a black backdrop and is not recommended for people with photosensitive epilepsy or any other similar condition. On the other hand, its exactly what we've come to expect from the modern era of shooters, meaning fans of the genre will enjoy this, while people who already dislike the genre probably won't be swayed just because this game occasionally gives you multipliers in the several hundreds of times range and the extra lives are giant space cows which fill the whole screen. Their loss.

In addition to the main version of the gameplay style, there are two versions of the game based on their 1982 models which, naturally, have a very retro feel to them (and contain the actual part of the game where the word 'grid' in the title is relevant). So if you're into that sort of thing, or just want to see how far the game has come, those are here for you. There is a "Thrusty" version of the game where ordinary movement has been disabled and motion is now carried out through a sling-shot effect, meaning you choose a location, click there and the ship will head in that direction until you move the mouse's location. Finally there is endurance, which is the original game except you only have one ship, though through "sheepie save" you can continue after death.

In addition to all of the above, (but wait, there's more!) the game includes four difficulty modes — all named after different levels of curry spice. The easiest is Korma, followed by Madras, Vindaloo and the most difficult, Phaal. Throw in a jukebox feature (listen to any of the music without distraction) and you've really got a well rounded, very intense and fully featured gaming experience here. If you're into this sort of thing, then what are you waiting for? If you're not, chances are the exceptionally stunning visuals may just put you off in the first place. Those who stick with it will be rewarded with one of the best experiences to hit the genre in recent times. And whoever you are, please remember, if you see a floating space sheep, be sure to never, ever, let it escape.

Best option for Mac owners is to use Boot Camp and XP. :-)

Space Giraffe is probably the best action game I've ever played. Maybe this will get me to finally figure out Boot Camp.

(Thanks for the review. I hadn't realized how different this was from Gridrunner++.)