Green Ninja: Year of the Frog

It's not easy being green. Especially when you've been captured by ninjas craving frog legs. Well this time, they've messed with the wrong amphibian in Nitrome's puzzle game Green Ninja: Year of the Frog, free with ads for iOS and Android. Swipe in the way you want the green ninja to go and you will ninja kick in that direction until you hit a wall, taking down all the evil ninjas in your path, all while croaking your fearsome ninja call. Not all walls are created equal. Your frog will grab on to basic red walls, but golden ones are too slippery. There are one way walls, and green sticky walls. There are also blocks and barrels that will move when you hit them, as well as hazards for you to avoid. It's possible to get stuck, so use the handy reset level button in the corner if that happens. Can you out ninja the ninjas? 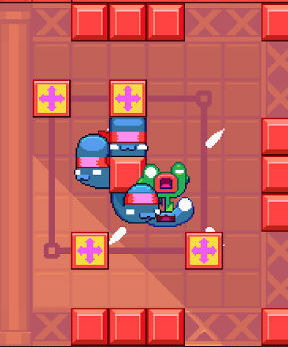 The game will often unlock more than one level at a time, so if you get stuck on one, you can go try the other which is nice and helps alleviate the frustration of not being able to progress if you can't pass a level, though you also have the option to watch an ad to skip through a level. The ads in the free version that sometimes appear between levels border on being intrusive, but the game is well worth the $1.99 to be rid of them. After you graduate from dealing with the storm trooper level of ninja (who hires these incompetents anyway?), you start to run into baddies with some tricky moves under their headbands. Some will move every time you do, and others actually have the nerve to shoot at you. The puzzles start easy and ramp up with a nice difficulty curve. The graphics and music are what we've come to expect from Nitrome, which is to say quite nice. Green Ninja: Year of the Frog is a delightful twist on an old genre that will keep you hopping through the levels.

Android:
Get Green Ninja: Year of the Frog

YES this is definitely a step up from all the endless mobile games Nitrome's been churning out recently.

Okay, not that I hate the endless games...I just prefer level-based ones more for the most part. And a lot of Nitromians seem to have this sort of opinion towards Nitrome's recent wave of mobile games.

Seriously, this is one of the Nitrome games whose art and music reflect on that "classic" Nitrome style I felt had been missing from some of their recent releases. I didn't hate them; they just didn't feel like playing a Nitrome game.

Green Ninja, however, exceeds my expectations. The art is cute and the music is lovely. Oh and the sound effects are AWESOME. It's level based, and on many accounts will unlock two levels for you to try as you make your way along the map. You can also watch a video ad to skip some levels it seems, though I have not yet reached a position where I felt I needed to do that.

What I also actually really enjoy is the game's lack of a scoring system or HUDs that try to limit the number of turns you make. Sure those are good for replay value, but they can detract from a first-time playing experience. I dunno, maybe making it togglable could have been done, considering how there are achievements related to the number of moves you make in a level. But overall, I'm quite impressed with this one. It's one of those games where I can't believe is free!