Love is a many splendored thing, and in this case, it's also a pay-what-you-want (including free) indie visual novel dating sim from Light Grey Art Lab. The first in a planned series of four games that each focuses on a different segment of the Myers-Briggs personality types, Great Personality: Guardians sees you starting over in a brand new town filled with interesting people. The choices you make will determine not only who you meet, but how you get to know them, and potentially grow even closer. Just click choices to choose as they appear, right-click to save or load at any time, and use the mouse scroll wheel to rewind text. You can play as any gender, and date whoever you want, but think carefully about your interactions if you want to wind up with anyone in particular. 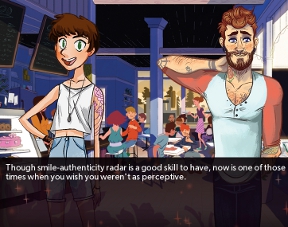 The aim of Great Personality is to provide a greater emphasis on character and, well, personality beyond basic physical attraction when it comes to romance, and for the most part, it shows. Not only are the characters incredibly diverse, they're all well written and likable in very different ways. Despite all being based on the Guardian type, the characters here couldn't be any more different, and all of them manage to be interesting to the point where you'll want to replay to try to romance them no matter what your orientation might be. It's hard not to be won over, for instance, by Oli's immediate charm and cheer, and a scene at a party where she literally slinks by in the background while you're chatting someone else had me actually laughing out loud. Of course stoic, shy Conor (who might secretly be LARPing as Fluttershy) owns a copy of The Fault in Our Stars, but you'll only spy it as a little background detail. Though the different art styles (over 50 artists took part!) initially seem to clash somewhat, the vibrant, unique styles only add to the game's flair and appeal. The fact that the game is available free is sort of shocking considering its high level of polish and replayability, so make sure to donate if you enjoyed it. 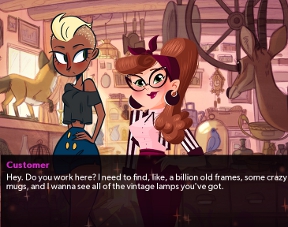 The downside is that compared to some other games in the genre, the level of interactivity in Great Personality is a bit low. You might only be offered a single choice per chapter, and occasionally those choices are vague enough to make it difficult to intuit how they might be received. Because you can't choose what you might like your character to say, it feels like you're often railroaded into arbitrarily good vs bad interactions you can't foresee, which is frustrating on a game that's trying to make you project yourself as the protagonist. (Although Star Trek or Star Wars is a very important question.) Chapters are quick and small enough in scope that most of the romances feel more like beginnings than a full relationship, and the last few chapters tend to feel rushed in a way that is at odds with the slow start of the game. There are fewer character sprites, for some reason, and some scenes that would have benefited from some sort of character artwork are left sadly blank except for their environmental art... or blank altogether.

Still, Great Personality: Guardians is a fun, breezy, upbeat visual novel sim with a cast of characters you'll want to get to know. A playthrough probably won't take you more than a half hour or so, but you'll want to boot it right back up again to see the other endings. It's bursting with personality, appropriately enough, and is the perfect choice for someone looking for a game to sink back and relax with. Though as of this writing there are some typos and other errors, a new version that fixes those (and adds in some "new bits") is coming soon, and the second installment, Idealists, is due out later this summer. You can follow the development and see previews of the other games at the official site!

Why is the art for the characters schizophrenic?

As mentioned in the review and on the official page, it was a collaboration with 50 artists. :)

I'd donate, but the only option is paypal and I don't want to make an account just for this...

Oh, dear. It seems like there's a lot of misinformation here... on the part of the developers, that is, not jayisgames.

The shortish version is that Myers-Briggs isn't, precisely, a personality type. It's more of a 'cognition type': each type corresponds to a different way of thinking, which doesn't necessarily translate into personality (motivations, quirks, behaviour, etc.) although I suppose it could be called a part of it. Mulan and Flynn Rider are very different characters, but they're both ENTPs.

I'm also somewhat put off by the character descriptions on the game's website as they correspond to each type. It's hard to tell from a short blurb, but some of the types of their own characters seem off (shouldn't the INFJs be the ones with the big moral compass and not the INFPs? Why are INFJs described as the most 'complex' type? Why is the T/F divide being described rather erroneously as 'logical' vs. 'emotional'? etc., etc.).

Eh, this is probably not going to be terribly interesting to anyone who isn't interested in this sort of thing, and I don't want to sound like I'm an expert who knows so much more than these people on this subject (I'm not). It's possible they just wanted to make a dating sim and used the Jungian functions as a basis, and I'm sure it's a perfectly nice game if you ignore the divide between the game and the source material itself. I'm a bit leery, though, because there's a lot of misinformation surrounding the types already out there.

TL;DR: I'm dubious of the portrayal of the Myers-Briggs types here, but I'm sure to a lot of people that won't matter.

On the other hand, maybe I'm hugely overthinking things. :)

How do I start the game after I download it? (Windows 8)

Hello! All you need to do is run guardians.exe in the files you downloaded. :)

The game doesn't give you enough choices. The way it is set up is you can only meet two people at one time and then have to pick either one of them. Once you hang out with then the first time, you'll fall for them right away and stay with them until the end of the game. You can't reject that person (or both) and go meet someone else (like what happens in real life). I had a situation where I HAVE TO choose one of two people I both hate. I'd prefer to meet all of the characters in some way or another and choose among all of them.

Good game, although stylistically a bit awkward. I don't know if it was my computer or what, but I remember weird small things happening, like one of the "chapter" banners flashing and going away rather than letting me click or the game cutting to the background after random bits of dialogue (as though the game were trying to put dramatic pause where it didn't belong).

There was also a glitch I ran into. At one point in the game, the character takes a shower. I had the sound clip for that bit stuck throughout the rest of the game. (Judging by the preferences menu, it was classified as "music".) Even when I saved, exited, and reloaded, it didn't go away or change to any other music.