It's your first day in the shipping plant. You've been given the simple task of sorting out a few colored boxes. How difficult could that be? (For those playing at home, the answer is "immensely.") Great Permutator is a tough-as-a-titanium-statue-of-Steven-Seagal puzzle game by Ripatti Software that will remind you a lot of SpaceChem, in terms of both ingenuity and difficulty. 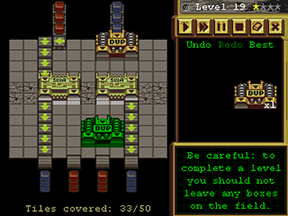 At the top of the screen are incoming boxes that are either red, blue or yellow. Using conveyor belts and a number of specialized machines (called "action blocks") it's your job to sort the boxes into the designated areas at the bottom of the screen in the correct order. You simply click and drag on the tiles to place conveyor belts, or drag and drop action blocks from the available pool on the right side of the screen. Conveyors can be rotated by clicking on them and you can right-click-drag to delete anything you've placed down. Some stages have cracked tiles that can't be built upon, while others have pre-placed blocks that can't be moved.

Action blocks come in a variety of different flavors which are gradually introduced throughout the game, including Triggers which sort boxes left and right alternately, Exchangers which alter the color of incoming boxes and Teleporters which, well, teleport. Once you've got a configuration that seems seaworthy, it's time to hit the play button and see what happens. If any boxes collide, or end up at the wrong destination, or get left behind, it's back to the drawing board. One nice touch is that you can temporarily lock input conveyors with a click. This is perfect for testing out parts of a large contraption without seizing up the machine because you haven't figured out a route for all the boxes yet. 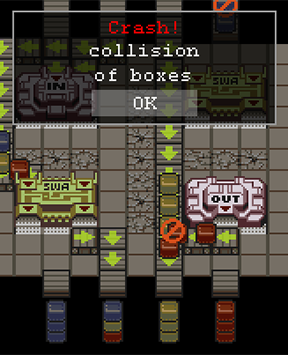 Analysis: To quote Mr. Gumby, "My brain hurts!" As mentioned, Great Permutator is reminiscent of SpaceChem in all the right ways. Beyond the themes of production and sorting, Great Permutator contains that beautiful element of seemingly simple tasks which unravel in complexity as you dig into the limits of the puzzle. Make no mistake: while the mechanics are straightforward, Great Permutator is freakin' hard. Some might say frustratingly hard. Many of the stages require an intense amount of thought, planning, refinement, prayer, swearing and mental breakdown. However, that just means that the eureka moment of finding a correct solution is all the more satisfying. Each completed level makes you feel like a genius, and watching your precision-built machine shuffle and sort everything into its right place is a thing of beauty.

Of course, merely finding a solution is one thing — finding an ideal solution is a whole different box of... boxes. Each stage has an A+ ranking which can only be obtained by constructing a solution under the given tile limit. It's pure puzzling masochism, forcing you to re-evaluate every aspect of your mechanism, trim every sliver of fat and, occasionally, start from scratch. It can be maddening, but that only makes the fruits of your efforts that much sweeter.

On another note, while the artwork is pleasingly reminiscent of old DOS games, the in-game visuals are a bit on the drab side. Also, a level editor would've been a nice addition, as there is always untapped potential for evil in the brains of puzzle fans everywhere. But these are minor nitpicks at most.

All in all, Great Permutator is a simply-presented but devilishly good piece of puzzling. It ain't easy, but it's well-made and the puzzles are downright brilliant. While casual gamers may find the difficulty curve a bit steep, hardcore logic fans will find plenty of ingenious brain-teasers to love in this modest but extremely rewarding title.

Great Permutator is on sale for 30% off!