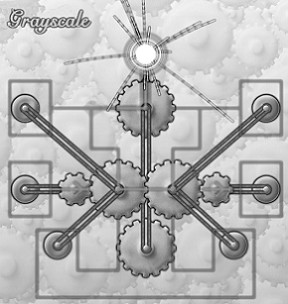 When we think of gray, we often think of gloom, depression, or dullness. But shades of gray can be beautiful. Just look at the photography of Ansel Adams or Robert Mapplethorpe, the cinematography of Janusz Kaminski, or the savage and haunting power Guernica. So don't walk away without at least checking out the delightful Grayscale. Designed by Florian Himsl (Komix), this fun little puzzle game is anything but dull or gloomy, and might change your mind about the meaning of the word gray.

Pipe puzzles are fun things. Used to channel electricity, fluids, or even traffic, they often show up as mini-games within larger downloads, or occasionally in flash games such as Gridz. Gear puzzles are fun as well, though again most often seen within a larger work. But what happens when you cross a pipe puzzle with a gear puzzle? You get the unique mechanic that is the core gameplay of Grayscale.

The basic objective here is simple. Start at the small circle, click on it, and drag your energy along a path to the big circle, where you will be greeted with a nice burst of black and white fireworks. The only problem? Gears. Gears with paths. Gears with paths that don't always point in the direction that they need to be. You can always move around the gears, catching the cogs and moving them in the direction that you want them to go. If, that is, you can figure out what direction they should be going to accomplish the task. Still pretty simple, but then the difficulty begins to ramp up with gears that move other gears next to them, gears with belts that move distant gears, and gears that have 90 degree angle paths, gears with one way paths, and whole interconnected systems that move in various ways as you go past. Then, the dotted paths that disappear after one use show up and, well, your simple game is not so simple anymore.

As hinted at by the title, this fun little bundle of casual gameplay is done up in all shades of gray, giving it a nice artsy look and feel. Your dark gray paths and gears float serenely amongst fluffy clouds of...well, more gears (or gear shaped clouds, as the case may be), giving the game an unearthly beauty. Music by Coleman Trapp only adds to the experience, as the game features several small pieces of music that change as you move along the levels. And if you don't like the music, well, there's always the handy mute button. Your progress is saved automatically so there are no worries if you'd like to take a break after a few of the more difficult levels. 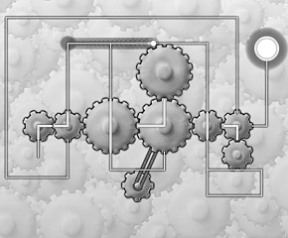 Analysis: The combination of pipe puzzle and gear puzzle in Grayscale creates a unique, fun dynamic that quickly sucks the player in. Gorgeous to look at and fun to play, with a perfect little reward response in the fireworks display, Grayscale might be one of the best ways to kill a few minutes (or hours) you can find in your browser.

There are a few downsides to be sure. With only 20 levels, the game is rather short. And some sort of tutorial would be helpful rather than forcing the player to fumble through the first few levels, discovering the basic movement dynamics. A little more variety in the gears would also be nice, as the upper, more difficult levels begin to look rather alike. Still, with its unique mechanics and beautiful backgrounds Grayscale is one fun way to fill your time and challenge your brain.

Not quite a pipe puzzle and not quite a gear puzzle, Grayscale is a melding of the two genres into something both unique to play and easy on the eyes. The difficulty ramps up quite nicely and is enough to hold interest through the levels as you struggle to produce the black and white fireworks that denote success, but the whole game is still simple enough to pick up that it's accessible to players of all ages. Quite a lot of brain twisting, turning, and teasing bundled up into a beautiful little bow. What are you waiting for? Get that energy moving! And learn to appreciate the many shades of gray...

Level ten is hard. Stuck on level 15 though right now. I can do the bottom bit, but can't figure out the combination for the top set!

Loved the music. The art style is consistent and the controls work very well.

I'm not so sure about the puzzles. Most of the time, I solved them by trial and error, since just looking at the gears and trying to guess the gear ratios tended towards being a waste of time. The puzzles with one-way tracks force you to restart often, which makes trial and error more time consuming.

However, the game is short enough that it bows out before overstaying its welcome. All in all, a very fun and clever game.

Neat game, but I was really irritated by how the UI seems to go out of its way to get you to click on external links.

you need to turn the big arrow gear clockwise with the right group as much as possible. This means turning it counterclockwise with the left gear once, but that gear is much slower than the others so it balances out

I'm also stuck on level 15, and it's to the point where I've convinced myself it's impossible (though clearly it isn't if some of you have solved it).

There's a small arrow circle on top of one of the 5 paths in the upper section. Should it be pointing up?

The arrow does indeed need to point up. And you'll need to pass through it multiple times.

but the only way I've found to get the arrow straight up winds up with me trapped on the far right of the uppermost line, horizontal, having already used the rightmost crumbling pipe.

that's how i did it.

Beautiful, but not really intriguing.

Really nice but needs an editor :(

Original and challenging, well done! I gotta say, Level 15 was by far the hardest level, because I kept thinking the arrow in the upper part had to be pointing down... Thanks, bpsp!

stuck in 11 :( walkthrough is only to 8th level

Thank you Angharad!! I really needed that!

yes! lvl 15 is easy if move allways counter-clockwise. bigger part of puzzle you have to begin right passage.