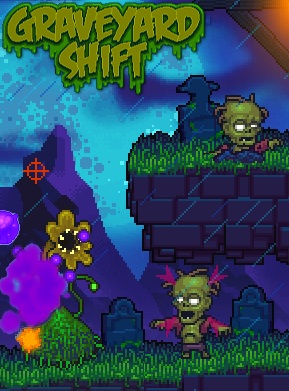 Nitrome's latest release, Graveyard Shift, is a first person rail shooter reminiscent of classic arcade games like Time Crisis. You know, those stand-up cabinets with attached guns where you had to shoot off the screen to reload. Instead of plastic pistols, you're armed with your mouse, and instead of taking out bad guys, you're disposing of zombies, killer bugs, poisonous plants, and other Halloween-approved foes.

As the landscape slowly scrolls by, zombies pop out of the ground and roam the platforms. Move your mouse and aim the crosshair to send baddies packing. Sometimes an enemy will lob a projectile at you. Hold the [spacebar] to activate your shield and move it around with the mouse to block the incoming fire. Your shield weakens with each hit, though, so be sure to pick up refills every time you see them.

Fortunately, Graveyard Shift isn't as simple as aiming a pistol at passing zombies. Sometimes a helpless maiden will stroll onto the screen, changing your immediate objective from "shoot everything that moves" to "clear a path for the lady". You'll also nab a few power-ups, such as health crates and a gestural-based sword weapon (which, I admit, is very, very cool). And grenades. Can't forget the grenades!

Even for a short browser game, Graveyard Shift packs a lot of variety. Plenty of unique enemies to dispose of, including foes who are only vulnerable for a short amount of time, lots of weapons to use, and a few areas where you can interact with the environment. Graveyard Shift is a great trip into classic first person shooting territory!

It doesn't break any new ground, but sometimes you just want to blast some zombies. It also explains the mystery characters in the website background!

this a great nitromer, definatly one of the best in awhile.

Nitrome's first shooting game, as well as one of their greatest. Keep up the good work!

The game suddenly became harder on level 6, since everything thing is shooting at once and you need to be Conservative with your sword.

You can score farm during the first boss. Please fix that.

Hives, not the first boss. I just met a second and third hive.

I noticed, that if you die while poisened, you cant seem to press the retry button (space also doesnt work)

This game was so easy I never died once, but I had to get off twice. I could have got 1st place. The only hard part was the boss.

Level three is hard! Especially with those piranhas!

Is it only me or is the sword hard to use? how do you use it? I don't get it.

Drag to use the sword to kill the plants. Just hold the mouse button on them. I never overheated, even when I tried to overheat.

Music is really cool and reminds me of John Carpenter's Assault On Precinct 13 (1976).

Keep up the good reviews, JohnB

So stereotypical, rescuing maidens. Would it really have been that much harder to break the mould?

Ugh, cannot get past lvl 12 ending. Any advice? There seems to be some ideal order of taking out zombies/crawlies/flower monsters/centipedes, but I can't figure it out.

Hey, I'm finding Level 12 difficult too...stupid hive+2 centepedes busts my shield before I can do anything...

The spiders are... utterly disturbing when they attack. I mean, they look like normal spiders, then they just jump at you with scary mouths on their backs, and they come from a VERY ugly-ish hive!

And what do the worms even do???

For some reason, my shield does not properly respond to my movements, like not even close to my movements. No, I am not poisoned, so don't answer with that excuse.