Awakening one night from a nightmare where your sister pleads with you to save her, you receive a phone call from your brother-in-law who informs you that she actually is dead. After hastily informing you that she didn't want anyone other than himself to attend the funeral and hanging up, you decide that this is possibly the most suspicious thing he could have done aside from shrieking, "WELL I DIDN'T KILL HER OR ANYTHING IF THAT'S WHAT YOU'RE ASKING GAWD" and set out to uncover the truth. Gravely Silent: House of Deadlock from Vogat Interactive is a lengthy hidden-object adventure that combines magic, mystery, and menace into a satisfying experience that just goes to prove you should be wary of any man with that much oil in his hair and who looks like he belongs on the cover of Brooding Hunx Monthly. 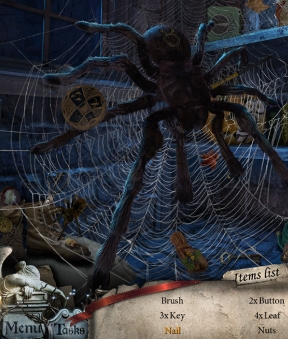 Gameplay is divided between puzzle solvin', item usin', and hidden-object findin', and you'll be doing quite a lot of all three. The game is played entirely with the mouse, clicking on the screen to interact. You'll want to be very diligent in exploring the areas you'll visit throughout the game; as you'll quickly discover, there are secrets everywhere, and if you're playing with harder difficulty that disables the helpful sparkles marking interactive places, you'll really have to train your eyeballs to notice things that seem out of place and be willing to investigate every nook and cranny. The hint button will let you know if there's something in the area you can interact with, and if you find a puzzle too difficult, you can always skip it when the bar fills up. Unlike a lot of recent adventure game protagonists, you're not carrying a journal with you, so to stay on top of things make sure you check your task list and keep your eyes peeled for notes, photos, and other bits of incriminating evidence lying around to further the plot... after all, any good criminal mastermind knows the secret to a long and successful career is to leave as many clues to your weaknesses and potential downfall as possible strewn about the area.

I should also point out at the behest of several people that if you have a phobia of certain creepy-crawlies, such as the fine specimen depicted in that screenshot right up there, you might want to be cautious about trying this game. I promise I won't judge you. After all, you're talking to a lady with an irrational fear of giant sea monsters and large bodies of water. (Which made playing certain areas in, say, Bioshock or even Knights of the Old Republic... interesting, I'll tell you that much.)

Analysis: Gravely Silent: House of Deadlock is a game that I have a lot of admiration for; it took a simple concept and spun it into a surreal and engaging experience that really surprised me the more I played. To uncover the truth and get a shot at saving your sister, you'll wind up saving the souls of other people bound to the mansion, learning their stories and even visiting a dreamworld or two. What's great is that the game works to keep you interested in the story as you go along, doling out clues in the form of pictures or correspondence you'll find lying around as you explore. It's a great incentive to keep going, and a welcome change from games that just vomit lengthy exposition into your protagonists' journal every time you so much as glance at the scenery. If you have to stop playing every five minutes to read a wall of text just to figure out what's going on, you're breaking up the flow of the whole experience, and House of Deadlock mercifully understands that. As you play, you feel like you're uncovering the pieces of the mystery yourself rather than having everything narrated to you, and it makes for a surprisingly engrossing experience. 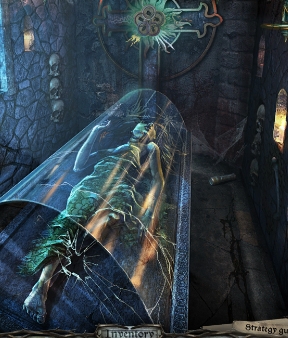 The gameplay in House of Deadlock is actually pretty darned satisfying despite not really presenting anything you won't have seen before. The puzzles tend to be variations of types you'll likely have come across in other games, but are presented creatively enough that they don't feel stale. Which, as it happens, is a good thing, because this game is practically infested with puzzles... in a good way, of course. Your brother-in-law apparently subscribes to the Umbrella Corporation method of home security and invests in a lot of themed keys, locks, and puzzles. The hidden-object scenes do have an unfortunate tendency to shrink down normal sized objects in order to hide them, but then again it's also the sort of thing that becomes easier to spot as your eye becomes attuned to the art style.

All told, Gravely Silent: House of Deadlock is just a fantastic example of the genre; fans who prefer more "serious" titles may be put off by how clearly fantastical the story winds up being, but for players who want a surreal adventure with a lot to do, this is an easy recommendation. (Naturally, I always recommend you try the demo for anything before you buy.) It's also a fairly lengthy game with a lot to do in it, clocking in for me in excess of six hours. Of course your mileage may vary depending on how much smarter than me you are, which is probably a lot... speaking of flattery, nice shirt! While you will find yourself doing quite a bit of back-tracking throughout the house itself and the grounds, the game does such a fantastic job at keeping you busy with new puzzles and objectives that it's hard to mind at all. Despite not doing anything particularly new or original, Gravely Silent: House of Deadlock is a extremely sturdy and extremely enjoyable game from a developer that clearly knows their stuff.

aggggh - THANKS for the warning about the creepy-crawlies! Exactly the kind of info I need from game reviews. Signed, Arachnophobe.

Is anyone else getting a visual glitch playing this game? When the cursor turns into a magnifying glass and I zoom in on something, a different screen intermittently flashes over the one I'm looking at. It's really annoying and makes it hard to see what I'm supposed to be looking at and I don't know what's causing it. If anyone else has this problem and knows of a fix for it can you let me know?

the same happens to me: the flashes when i enter some magnified area.
any patch?

I am stuck in wife number 2's hidden object game. There is a rainbow (one that requires an extra step)that is so high up on the screen that the cursor will not touch it. One of the few times I have had problems with a Big Fish Games product. I am a subscriber to their games.

Lots of game to go, but I don't know how to get past this problem.

Hi,
Is anyone experiencing a glitch in the game? I am trying to get the two fangs for the boar on wall. I managed to get one fang, but I can't find the second fang. The game won't let me continue unless I have the two fangs in! This must be a glitch or am I missing something?!