skills interspersed with mini- and micro-games, providing enough action to keep you completely engrossed (and grinning) from beginning to end.

Pastryport, 1948. A pie was created that was so delicious, everyone had to have it, no matter the cost. People flocked to get their pieces of the pie, only to discover one teensy-weensy little side effect: eating the pie turns you into a zombie. With the town now overrun with undead (pudgy undead we would suspect, from all the pie, you see...), Bonnie and Johnny Loca, owners of the local funeral parlor, have to put every last monster into its final resting place, one careful step at a time. 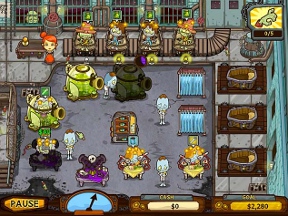 Here's how to deal with the undead. Zombies come rolling in on the carts at the top of the screen and are subsequently whacked with an anvil on a rope. As long as they're dizzy (represented by the stars circling their heads), you're safe, so work fast. Drag the zombie to the formalin tank to give it a good dose of the Loca's secret formula. Then, it's on to the bone fixing table, the make-up chair, or maybe the dressing room for a new and fabulous outfit. Finally, it's to the coffin the zombie goes, ready to be packaged up and laid to rest. Depending on each zombie's preference and the town you're playing, the options will be different, but the basic pattern is the same.

Grave Mania adds some micro-games to the mix that are randomly initiated during different stages of the zombies' preparation. For example, on the bone fixing table, you have to click bones to line them up with the zombie's silhouette. You might have to pick new outfits or fill fluid vials to the marker, too, all within a short time limit. If you aren't one for working under pressure, relaxed mode shuts off the timers, taking away any sort of pressure you might feel. It's still a challenge, but you don't have to worry about fumbling with your mouse when a few seconds can make a big difference. 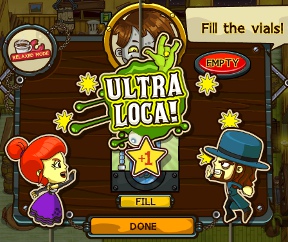 Analysis: Grave Mania: Undead Fever is an exceptionally creative time management game. Its quality is right up there with the Delicious: Emily series, but with its fun sense of humor perfectly suited for internet-dwelling humans, it manages to stand out on its own.

Upgrades are somewhat lacking in Grave Mania, and while you get to speed up your various stations, use power-ups, and purchase additional zombie-beautifying zones, it doesn't add up to a whole lot of change. Sure, having a zombie butler is cool, and making him more effective is even cooler, but does he really add much to the experience beyond the "hey cool" factor? Whatever, time to whack zombies with a shovel!

The key word with Grave Mania isn't "re-invent", it's "invigorate", pumping new life into a very well-established genre. Even if you've had enough Cake Mania and Kate fixing up vehicles to hold you over for a lifetime, give this wonderful little game a try. You won't regret a single moment you spend with Grave Mania.

And zombies invade yet another genre of gaming. Perhaps next we'll see a zombie dating sim.

I bet there already is one in Japan...