Oh no! The famous Willmore Candy Factory is on its last legs! Orders are being delayed, the pipes in the Chocomat are out of alignment, the furnace has broken down, and there are bits of metal getting into the candies. What's a recently graduated college gal to do? Why, save Grandpa's Candy Factory, of course! 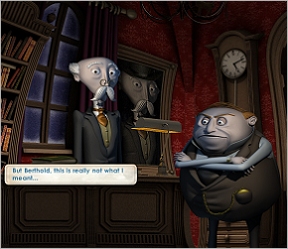 Grandpa's Candy Factory is a hexagon grid drag-style (or chain-style) match-3 game laced with mini-games of all sorts. After the lengthy prologue about the life of Cathy Willmore — the protagonist — (thankfully skippable) you can get down to the guts of the game. Cathy must help Grandpa Willmore and the plant manager Berthold rescue the ailing factory, whether that means working the shifts to cover recently laid-off employees or fixing the broken machinery. The factory is divided into seven buildings representing a full day's work, each building housing three match-3 scenes, followed by a wicked pipe puzzle, three more match-3 scenes, and topped off with a hidden object game. Lots of stuff crammed into one small (but gorgeous) package.

The heart of the game is the match-3 puzzles. Starting out slow, you must ship certain numbers of product (candies, fruits, jellies, cakes, etc.) by dragging three or more of an object inside a hexagon grid. However, it's never that simple, is it? As the scenes progress more and more obstacles leap into the fray. There are some items that are blocking the scene and need to be processed — they can be used as a "wild card" in a match and you must make three matches over them before they will drop out of the way. Then the furnace breaks down, and some items are iced over, requiring two matches to remove.

Oh, and then, the sabotage begins.. Yes, the candy factory is in trouble after all. Random bits of stuff you don't want to find in your treats begin to appear: ball bearings, screws, pine cones, they all have to be removed from the grid by making matches until they drop off. Dialogue scenes (which can also be fast-forwarded or skipped altogether) show up between some of the stages, moving the story of the mysterious saboteur along quite nicely. Various power ups appear, filling up more quickly the longer the chains you can manage to make. Later in the game Easter eggs begin showing up, allowing another wild card into the mix which also bestow random power ups when broken. Play in timed mode for wickedly frantic fun or in relaxed mode for easy, casual gameplay. 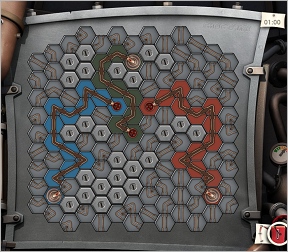 Oh yes, then there's the Chocomat machine. Basically a pipe puzzle, the Chocomat's pipes are out of alignment. Get them straightened out quick, because the chocolate is starting to flow. Starting slowly with one or two pipes, the Chocomat pipe puzzles quickly become wickedly difficult, having to solve two or three simultaneous pipes as chocolate slowly begins to flow through the system. Move too slowly, miss a connection, and chocolate will spray everywhere, forcing you to start over. For folks who don't like pipe puzzles there's a handy skip feature, allowing you to get back to the candy assembling goodness.

Rounding out the end of each factory shift is a hidden object puzzle. Find lists of items to help your Grandpa pack for his trip; find the recipes which have gone missing; find clues to the saboteur; etc. Click on each item on the list to see a silhouette of the object to help you find it.

Analysis: A lot of work has gone into making Grandpa's Chocolate Factory look stunning. The characters are rendered in a 3D Pixar-style, making the game looks as if it should have been a feature movie. Ingredients in the match-3 sections are bright, beautiful, and so realistic they make you want to lick the screen (or at least stop for a candy break). With the addition of the elements that need to be processed, the Easter eggs, and the random bits of non-goodness the timed mode can be fast and furious in the latter rounds, necessitating an eagle eye on the refilling timer. The factory scenes themselves look like they could have come straight out of Willy Wonka. Bouncy, cute music and wonderful sound effects round out the gaming experience. Enjoy the sounds of grinding spices, exploding ingredients, cracking ice, and squawking chickens (the Easter eggs). 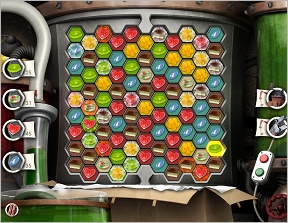 The match-3 scenes are easy to master, a quick tutorial takes you through the basics and shows up occasionally when a new item or power-up becomes available. In addition to the common battery of items, Grandpa's Candy Factory introduces an inventive tool — the robot arm. Use the arm to help pick out foreign bits from the machinery. Navigation between the scenes is accomplished by a simple mechanic — two circles, one filled with a red X (for no) or a green check mark (for yes) allow you to proceed.

With everything pieced together so well, any flaw in Grandpa's Candy Factory naturally stands out like a sore thumb. In the hidden object scenes, items are tucked away in the shadows or stashed behind other objects, making them invisible to the naked eye. Other than using the silhouette feature, there's no way to get a hint where the next object is, making these scenes an exercise in frustration. Fortunately there's a skip button built in to all hidden object levels, so don't be afraid to use it.

Grandpa's Chocolate Factory is packed with loads of ooey, gooey fun, wrapped up in a completely edible chocolate bow. The visuals and sound effects almost have a taste of their own! The game is a bit on the short side, but the variety of games and amount of eye candy (heh, a pun!) make it a trip well worth taking!

The screenshot of the pipes mini-game looks really neat. It's a pity I can't play it without downloading a demo copy of a game that also has a hidden object component, both things that I usually avoid. Having said that, I'm going to download it just to prove to myself I'm not really that much of a curmudgeon.

Hmmmm... After reading the title, I figured this would be a game about Hugh Hefner

Has anyone else noticed that the persons in the second picture look kinda like the characters in Corpse Bride? A skinny man with a moustache and a small, fat man with almost no hair...

Surprisingly fun. I'm not a fan of match 3s but enjoyed the added various items/rules.

I agree with the review regarding the hidden object levels. These weren't fun so I skipped them as soon as I could - you need to find at least a few objects before you can do this but this can be accomplished by manically clicking everywhere.

Sadly, that's exactly what I came here to point out. They look like both fathers, with some minor variations (the short man has more hair and it's red, the tall one has white hair and glasses instead of a monical), but the resemblance is pretty obvious. Initially I thought this was a Corpse Bride game when I saw the picture.