You know, admittedly I'm not a parent, but I don't think having your child admitted to a school that looks like it's auditioning for Most Haunted and Structurally Unsound Establishment of the Year is such a great idea. But maybe the heroine of Gothic Fiction: Dark Saga, ERS Game Studio's latest horror adventure, knows some parenting technique I don't... like having your daughter kidnapped by the bloodthirsty spirit of a witch is a great way to encourage fiscal responsibility or teach her the importance of... safe driving, or whatever. That's what you do with kids, right? But assuming you want to rescue this one, saddle up for an easy but cinematic, stylish, and fantastically over-the-top cheesy adventure that fans of late-night budget horror movie marathons will love. 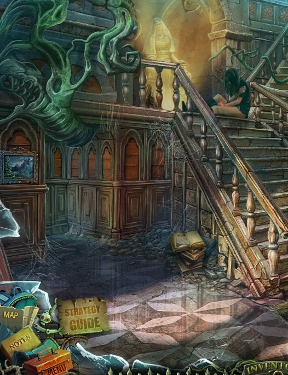 So, the witch. As you might have surmised, she's not particularly friendly, and her spirit has been wreaking havoc as she prepares for a dark ritual... and dark rituals are rarely a good thing. If you want to stop her and rescue not only your daughter but other restless souls, you'll need to track down all the pages of a mysterious tome, gather mystical energy in a jar (FEAR THE COLD EMBRACE OF MASON GLASS, FIEND), and stop the witch from completing her centuries-old evil plan. Though considering we're talking about "dark forces" that can be combated with night lights, you probably don't need to panic too much. The witch is also thoughtful enough to allow you to pick up a magic map that clearly shows your location and all the objectives in each area, so maybe she isn't so bad after all. Click around to solve puzzles, gather clues, and deal with movie-quoting malicious monster plants. You know... regular stuff. You can swap between the game's three difficulty settings at any time under the options menu, and the hint and skip functions you know and love also have your back. 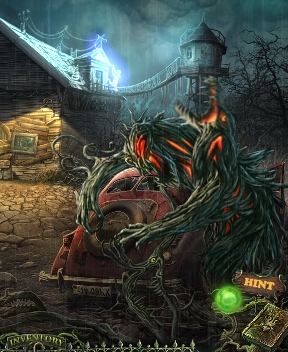 Analysis: If Gothic Fiction: Dark Saga could talk, it would say "Wheeeeeeeeee!" From presentation to story, this is simply a gloriously over-dramatic little gem with the sort of ghoulish style you'd expect to find from something starring Elvira. The somewhat cartoonish vibe given off by the design, which is redolent with monster eyeballs, ghostly apparitions, and radioactive green limbs, might not appeal to everyone. But if you want solidly entertaining with a great flair for the dramatic? Consider making a date with this game. The design is flashy and creative, the story moves along at a brisk pace, and there's a lot to see and do. Like outfit a knight with magic fireflies. A little silly? Sure. But also a lot of fun. You'll get to wield magic weapons, rescue and get help from creepy ghost girls, and more. That's basically my ideal weekend right there.

What the game doesn't do is necessarily a whole lot of innovation, with familiar tropes and puzzles and gameplay as a whole that don't provide much of a challenge. The constant barrage of CGI and flashy effects are also a bit much at times unless you're the sort of person who walks into a room stuffed with flashes and fog and goes, "This isn't particle-effect-y enough. It could be particle-effect-y-er." Though the game is littered with items everywhere for you to find, there aren't actually any hidden-object scenes to play, which is good news for fans of more adventure-centric experiences.

The low level of difficulty means that it almost feels as if Gothic Fiction: Dark Saga is really aimed at the most casual of the casual game fans, but there's enough to see and do that you'll still be busy for quite a while... around four hours or so. You'll want to try the demo before you buy as always, but if you want a flamboyantly ghoulish adventure game with a gentle challenge level and high production values, give this one a try. And, uh... maybe if the only school available in your new town is constantly lit by dramatic thunderstorms and always echoes with malicious, untraceable laughter... consider homeschooling?