Golden Scarabaeus by BestPhysicsGames is the sort of endearingly weird little physics puzzle that only gets stranger as you play. The object of the game is to collect all the golden scarabs on each level using the little square minions at your disposal, and the catch is that each of them has a different ability when you click on them. Some can float, others can roll, or jump, and some minions will also react to certain objects in the environment differently... they might be able to smash through blocks, and all can be attracted (or repelled!) by lasers you can turn on and off with a click. To get them safely around hazards and have them reach each scarab, you'll need to figure out the proper orders to hit switches, move blocks, and more. 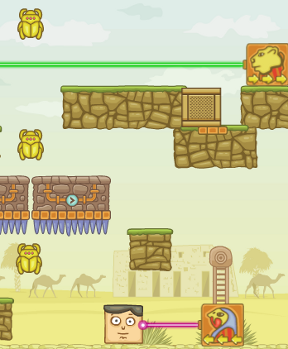 Golden Scarabaeus makes for a solid little snack of entertainment largely due to how it provides variety without drowning you in it the way other games might. The combination of different minion effects and the way they work with their environment allows for just enough interconnecting elements to make you think a little on each stage instead of having to keep track of a pile of different variables. Of course, it's still a fairly simple game with a relatively low difficulty level, but the regular pace at which it keeps introducing different things to its stages keeps things fresh. Clean visuals, intuitive gameplay, and forgiving physics makes this one an accessible, goofy treat for whatever time you have.

I cannot get past level 5.

I'm also stuck on level 5. Care to share a hint?

Pay attention to the other arrow!

Is anyone else having trouble with level 15? It's really buggy. The main block character keeps getting stuck and the button is unresponsive at times.

Also, does the music remind anyone else of Ocean Breathes Salty by Modest Mouse? Listen to the "Get away from me" chorus bit. It's so similar.

First click the upper-right orange button to break the ice with the laser.

Next pull the guy to the right with the traction beam. He will float up and get his balloon popped. Push the other orange button right away to shut off the laser.

If you turn on the other traction beam (up on the right) and float the man up and down by clicking on him, you can get him far enough to the right that he'll fall down onto the ramp.

My three-year old loves this game. Is there anything on iOS that would be similar - clicking various things in various ways to solve puzzles - that someone could suggest? I want to wean him off of Kingdom Rush and Plants vs. Zombies toward something with less violence and more problem-solving.