No, the famous Austrian hotel is not playing host to a lovely, atmospheric adventure game or an escape tableau. In 16-bit glory, and with procedurally generated floors, the Golden Krone Hotel (from Humbit) is the scene of a killing field: vampire-on-human-on-vampire-on-human style. Fane, the Exiled Vampire Prince, has taken up his residence at the hotel, and you must steal the Golden Krone and assassinate the prince to win the game. But if you think to yourself, "That's a nice, straightforward objective," think again. Before the dungeon-crawling, loot-trawling, and turn-based RPGing is over, if it ever ends in anything but your death, you may find yourself questioning if you have held on to an identity that wants to achieve that goal. 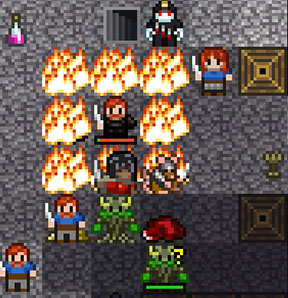 You play the game as General Sorina Arobase, Exalted Vampire Huntress. Equipped with a single spell and a short sword, you enter Fane's lair with your patron's last words of advice ringing in your ears: "I suggest you conceal your identity..." The game becomes a tapestry of hiding in plain sight woven in to a standard, rogue-like and retro dungeon/slasher game. So much of what goes on is best left to discovery, but the basics are these: your character moves, strikes and casts spells through the use of the [WASD] or [arrow] keys. Everything you have available to use, from spells to potions to actions, can be clicked or accessed via keyboard shortcuts.

The left side of the screen is your field of play, to the right is a raft of information. At the top you'll find your stats, in the center your actions and objects as well as a mini-map that reveals as you progress. In the lower right corner of the screen, you get a scrolling, play-by-play of your movement and activities. Once you've engaged an enemy, just as in Rogue and many games that came after, you need to think carefully about what actions you can take that will keep you in the game... whether you attack, or cast a spell, or simply try to get out of the way.

What sets this game apart from other brutally difficult games is the element of discovery, a part of which is the story that's revealed along the way. Sometimes it takes many lifetimes of foolish mistakes to make any progress, and sometimes you'll zip through the floors making all the right decisions as you go. But don't get in such a hurry that you miss the many, many items to pick up. You need all the potions and improvements to your armor that you can find; new spells will give you new advantages; and occasionally you'll stumble upon a clue that sheds light, so to speak, on why your strategies sometimes fail. Choose your disguise carefully, and don't get cocky. You might find yourself surrounded with no escape and the only way out is to die in a fiery heap.

Thanks Yaddab & Jeremiah. Links have been fixed.

This is *NOT* flash, just do a right click before you tag stuff.

This game does not work in IE. It only works in Chrome.

*Sorry. Mistyped that. Chrome is the only browser I have that it works in.
And sorry for double posting.

I can't figure out how not to starve to death.

The ale in the inventory helps a bit, but I don't know where to find more.

How to not Die (through the first five floors).

1. The first hall is pretty much the same every time. Make sure there's enough sunlight, and catch the noble vamp on fire. You can't fight the big baddies yet.
2. It's okay if you turn into a vampire. It's often a good way to keep human hunger at bay.
3. Drink Random Potions!!! Usually they turn out to be stuff like Curry or Milk. I have yet to have one harm me. (Though I have had one turn me unexpectedly, putting me in the middle of a ton of the enemy.
4. Humans don't attack humans. Vamps don't attack vamps.
5. The order/number of your potions does not change as a vamp. Vamps can't read, but they can count.
6. Don't use Blast as a direct attack. Blast is for blowing windows open.
7. Attack as often as you can win. Be a bully. Run from the strong enemies (assassins), attack the weak ones (mercenaries, soldiers).
8. Read! If you are human, (Or if you are in an area with many humans, turn into a human) read all the books you can get. Most let you (and your vamp side) identify potions, or they teach you new spells. Others are nice little back-story stuff.
9. Did you know that you can click on stuff to identify it? This will help you figure out if you want to read that book or attack that enemy, before getting close. As a vamp, you can tell the difference between Grimoirs and Primers and stuff.
9. As a human, rest then eat. As a vamp, attack the weakest and slurp up their blood before it disappears.
10. Explore. Collect as many items as possible before going to the next floor. The floor number gives you a nice menu-page top score list, but the exploration enables you to survive until you find the staircase.
11. Be aware of the window locations and time of day. The time isn't nearly as important as the little black box, sometimes with yellow lines.

Off this is not running for me this morning. It was fine yesterday. I have tried IE, Chrome and Firefox. No ad block running.

Also the voting stars are not displaying correctly they go from 1 to five down wards in a big box instead of the normal left to right.

Other games are running fine.

Sorry Yaddab, it's fixed now. Well we don't have luck with this game!

Fairly easy, as roguelikes go - I finished it on the first try. The "twist ending" was nice, in that it made

the fact that vampires are illiterate by nature

highly relevant to the plot instead of just a (clever) game mechanic. I sort of wish more hints had been dropped in the accidental conversations with non-hostile NPCs, or that there had been at least some hint or motivation to talk more and kill less (or at least, kill later).

- Blast doesn't work as a direct attack...against anything made of flesh. It's pretty effective against golems, and once it's levelled up, might also be effective against some walls. (Not sure if it works on ectoplasm, since that's not-flesh, but also not-solid.)
- The spell "Silver" seems to do a percentage of current health in damage to vampires. Using it more than two or three times against the same target didn't help much - use it as a first strike, then finish them off with fire or your sword.
- There are "Poison" and "Silver" potions, which harm humans and vampires respectively. There's still far more useful potion types than dangerous ones.
- The "Blood" potion will turn you into a vampire immediately, if you're impatient (or unlucky).

I don't think it's fairly easy at all; in fact, it's pretty tough to advance above Lvl 5 if you don't get lucky with the dungeon map and resource drop. I've beaten it once but can't put it down, keep trying to see what the other ending brings. Dang completionism.

Put out the lights, then put out the lights. Once you've cleared a level, take the time to extinguish everything and gather oil. Wandering as human, extinguish an area that is inhabited by humans ... for later. Obviously leave the lights on as a vampire if you're in a vamp-infested area. I really wish vampires could light lights—they're illiterate, not morons.

silent george, yes! You're the first person I've seen pick up on that. And yea, great tips, Halo.

Vampires can light lights, but they have to have Oil identified first, which is more difficult with the lower intelligence. Chugging a few spare Oils should do the trick.

I'm really glad to see people still enjoying this and beating it. Regarding the end, please don't get your hopes up. TBH, there's hardly a difference between the two "endings." There's probably more to see in the ~30 NPC conversation threads and trying to get a high score.

Hi Everyone,This was how me and my BF become VAMPIRES i got a guy from the internet called Mr Marc who was a VAMPIRE so i told him that me and my boyfriend would love to become VAMPIRES so he asked me of my Name ,Country, Age ,State , address and asked me to pay the sum of $250 to send me his blood which i did immediately and in the next 3 days i got the blood sample through the DHL which me and my boyfriend took in the blood into your body and in the next 30 minutes i turned into a VAMPIRE so if you interested in becoming a VAMPIRE kindly contact his email address today ([email protected])he also has a friend who is a warewolf just incase you want to be one [email protected]