I, I'm just a Gold Machine, and I won't work for nobody but you. I, I'm just a Gold Machine, morphing into a giant tool for some mice to use to help repel an invasion from an evil general.. Come on, clap along! You know how it goes. And if not, NOB Studios' crazy/funky entry into our Casual Gameplay Design Competition #8 is here to teach you. Puzzle out how to activate the mysterious "sand box" and turn it into the aforementioned Gold Machine to repel the invading forces across fifteen episodes, mixing action with strategy and a good ol' fashioned dose of what-the-heckery.

Although it may seem complicated at first glance, controlling the Gold Machine is actually very simple. Initially, you can only transform into Big Mouse Mode, although as you progress you'll learn to unlock other transformations to better aid in your defense and mouse-flattening capabilities. The goal is basically to get to the end of each stage by moving right while tiny black mice fling themselves at your ankles. You might have a lot of health, but that doesn't mean you're invincible, and you'll want to set up some countermeasures against attack. Pick up mice and plop them on the machine's head in Big Mouse Mode and they'll launch projectiles at enemies.

Apart from your mounted mice, you also have your mouse force on the ground, who may be equipped with what appear to be pool noodles, but are ready to come to your defense. Simply click on a mouse to pick it up, and drag it to the right of your machine, and your mouse will fight to the death for you. If you need more troops, you can click on the left eye of your Big Mouse Machine to have it pop one out from... uh... some... where? You have a limited amount of energy at your disposal, however, so you can't crank out an endless parade of mice. 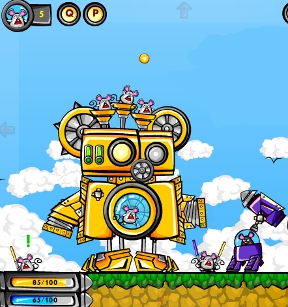 Analysis: If you're at all familiar with Nob Studio's work, such as last year's Hell Tour, then you probably recognized their work on Gold Machine right away. Their style is so distinctive, so cartoonishly grin-worthy, that playing their games are an absolute joy. Their interpretation of the sandbox theme is a rather literal one, but it works. There's something undeniably charming about the vague Beach Blanket Bonanza-ish vibe conjured up by the music used as a backdrop to the titanic mouse battle.

Gold Machine's set-up, unfortunately, also isn't the smoothest to work with. Having to fling mice around quickly gets both frantic and frustrating on later episodes. The game sorely needs a "rally" button that will automatically call all the mice to its defense. There's also very little variation from level to level, which is a little disappointing; it takes a while for things to even approach challenging, and more enemy and troop varieties would have done a lot for it. I'm also a little unclear as to why a giant mechanical monstrosity needs to be defended by the animal kingdom equivalent of a ping-pong ball slashing at its metal shins. Maybe mouse-on-mouse violence is more acceptable than simply steamrollering over your helpless foes? Squishy.

Despite having fifteen levels, the game is actually quite short, and most stages will probably only take you a few minutes to win. It feels like it needs a bit more tweaking, a bit more flesh on its cold robotic exterior, to really make it great. What exists is still worth a look, and Gold Machine is a fun, silly little game with a whole lot of charm. I am sure you can find out how to turn me on, just set my dial, and let me stomp on evil lightsaber wielding mice just for a little while, oooohhhh... Ahhhh, don't you just love the classics?

Please, for the love of all that is holy, a mute button for the music.

Figuring out how the darn robot works was a little confusing the first time around, but it was easy enough after I got the hang of it. I did get frustrated at one point when, while trying to resurrect some of my little mouse buddies, I somehow managed to compress my robot back into a cube. I had to set it back up piece by piece as enemy mice stabbed at my metal toes. I stopped halfway through when the looped background music that plays the same short tune over and over every level started to drive me crazy.

great music, how do I turn it off?