Is it even possible to be unhappy while playing a kart-based racing game? Just look at the adorable cast of XForm's GoKartGo! Ultra! Look at 'em. They wouldn't be anywhere else for all the world, and that's because they're slinging fireworks at each other, driving over red-and-yellow nitro pads, and leaving one another in the dust. Oh, sure, they might grumble because they were this close to the finish line and then some pink bespectacled guinea pig who shall not be named managed to grab a homing bomb from one of those antigravity presents just left out on the racetrack, and suddenly they were in fifth place and everyone else was streaming on by. But they know it's all part of the game, really. Their world has just about everything you could ever want out of a cartoony kart racer: Nine different tracks full of secrets and shortcuts, nine adorable animal characters with their own playstyles, an assortment of weapons you can use by either pressing [X] or the [spacebar], the ability to jump and drift with [shift], and even a two-player mode where one player uses the arrow keys and one uses [WASD]! Which makes it all the more happy-inducing that it's something you can play in your browser, for free. Yeehaw! 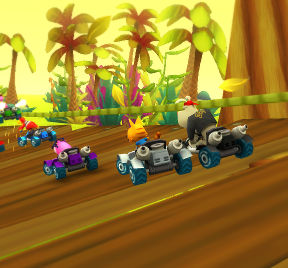 From both a visual and a technical standpoint, the tracks in GoKartGo! Ultra! are well-designed. They feature a diverse array of settings, from leafy treetops to sun-baked Mexican villages to the racetrackiest racetrack that was ever raced upon. The lighting is atmospheric and they're full of eye-catching details, which makes them a joy to drive through. But they're also stuffed to the brim with secrets, shortcuts, and obstacles that mean they're interesting as well as pretty. Each track has its own identity that makes it stick out from the rest, such as Central Park being a short, flat, simple course focused on avoiding obstacles, while Watermill Mine is full of ups and downs that will put your turning skills to the test. Within the tracks, item-containing present boxes and boost pads are placed strategically, offering you choices between speed now or possible item advantage, and the tracks often require you to drive accurately to get the most out of the powerups. The items themselves don't stray too far from the staples as Granddaddy Mario Kart established them. You've got projectile weapons, speed boosts, items to slow down your opponents, and invincibility, but the classics are classics for a reason, as they say. You do have the option to carry up to three different weapons with you, though! As for the characters, while they aren't radically different from one another, they do still have their own distinctions, and you can still play around to find one to suits your playstyle. The game's controls back this up; turning and accelerating are responsive, and just feel good.

One aspect that may frustrate some players, however, is the game's AI. GoKartGo! Ultra! uses what's often known as "rubberband AI". The computer players are precisely as competent as they need to be to give you a challenge. This means that, no matter how well you drive, they'll nearly always be close behind you, ready to smack you with an item and overtake you in a second. It does put pressure on the player to drive their best, but it also means that regardless of your skill level, you can always fall behind. You only need to place in third or better to progress to the next track, but it can still feel cheap when you get blasted with a firework mere inches from the finish line; the dreaded "Blue Shell effect," as we call it in Mario Kartland. Even for those who don't mind slightly cheaty, rubberbanding computer players, the sound design is still somewhat lacking. Every race track uses the same upbeat ska music, and the characters have the habit of spouting their cartoony voice clips over, and over, and over again. It gets old, and quickly. Compared to the rest of the game, however, it's a minor quibble at best. GoKartGo! Ultra! is a remarkable little racer that offers a full-fledged experience at the tasty price of free. It looks good, plays good, and you can even pull a buddy over for a round if you don't mind hunching over the same keyboard. Now that's how you bring home the gold!