If you're at all familiar with Greek mythology, you know that the pantheon was comprised of a lot of jerks who generally enjoyed messing with mortals in various bewildering ways as a form of entertainment, but Prometheus was generally thought to be on our side. One of his biggest achievements was literally stealing fire for humans from Zeus, the preeminent randy old deity, and for his trouble Prometheus wound up chained to a mountain where an eagle was to feast on his regenerating body for all eternity. Vivid Games offers a somewhat different take on this legend in their iOS action adventure Godfire, which sees Prometheus as less of a trickster and more of a dual-blade-wielding body chopper who sets out to steal the all-powerful Godfire Spark from Optimus Prime the rest of the Greek Gods, but winds up accidentally losing it in a series of dangerous catacombs after a furious battle. Now, as Prometheus, you'll have to stab, puzzle, stab, upgrade, and stab your way through legions of enemies and increasingly bigger and badder bosses to get the Spark back... but he's not the only one who's after it. With simple, fast-paced hack-and-slash action and beautiful professional production values, Godfire is a solid and straight-forward title fans of pick-up-and-play brawling action will enjoy. 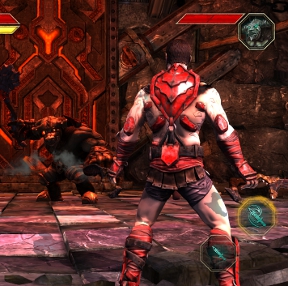 The game is broken up into a series of levels, and rewards you upon your completion of each with items and skill points depending on how well you did. The basic controls in Godfire are fairly straight-forward. Outside of battle, use the onscreen analog on the left to move Prometheus around, and tap the contextual icons that appear on the right to interact with certain objects. Tapping Prometheus's portrait will allow you to spend any coin you have to upgrade his current equipment, or distribute earned points to currently increase his statistics. Battles make up the core of the game, and can be anything from one-on-one boss fights to nasty skirmishes against multiple foes. In combat, the left analog will make Prometheus roll and dodge, while the shield icon above it will cause him to defend when held. The two icons on the right represent light and heavy attacks, and tapping them in special orders can unlock powerful combos, so try not to mash too much. In the upper-left corner you'll see a red bar that indicates your health, but below that is a yellow bar that, when full, allows you to unleash powerful special attacks by holding down the heavy attack icon. If you die, you can either restart from the last checkpoint, or spend in-game cash to keep fighting without losing any progress in your current battle. 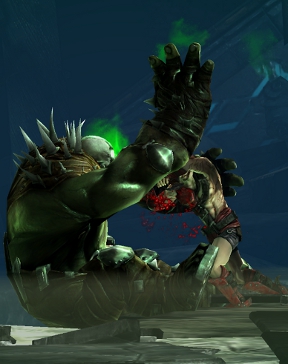 Analysis: One thing you can never accuse Godfire of being is anything less than one gorgeous little game. It looks beautiful both in and out of its cutscenes, and the attention to detail in the environments and characters makes it stand head and shoulders above many games the genre has to offer. Despite some attempts at puzzle solving and secret areas, Godfire is still mostly linear in nature, and levels tend to consist mostly of gamely loping from one encounter to the next. Since combat is basically the guts of the gameplay, that's not really a bad thing, as it keeps the action moving at a snappy pace. The simplified control scheme and the way the battles usually play out, dodging or blocking enemies and bosses until they expose a weakness of some sort, actually makes Godfire feel like a very classic console or arcade game. Since upgrade points or enough coins to enhance your equipment are relatively scarce, the emphasis is less on grinding and more on mastering dodging and executing combos, which takes a decent amount of practice to do. With most games in the genre, especially on iOS, focusing on buying powerful equipment or leveling up, having a title where success comes more down to skill than anything else is refreshing. If you're quick and clever, you can even make enemies damage each other by leaping out of the way just as they strike.

The said, however, there are several frustrating things about its combat and gameplay that break up the flow. In battle the camera angles seem more suited to showing off the environments or picking the most cinematic shot, so it can be difficult to figure out where you are onscreen in relation to enemies, or the magical invisible barrier that locks you into fights. That last one is a real annoyance, since enemies can occasionally trap you against it if you aren't careful, making it easy for Prometheus to get stun-locked against multiple foes. Speaking of fighting multiple foes, you'll also quickly learn that activating the finishing moves is not only unnecessary but dangerous, since you can't cancel out of the long animations, but other enemies can still do damage to you while it plays. Combat itself is fast, but not quite as fast as it could be, forcing you to slow down and tap icons carefully to be able to react to things in time. Godfire also features in-app purchases for gold and items that are optional, but the game still seems geared towards encouraging you to pay... the amount of gold you get and the frequency with which you get it is so low compared to how much you have to spend on equipment upgrades and identifying certain items before you can use them feels out of balance. I'm all for supporting developers, but when you've already paid once for a game, feeling like it's trying to make you keep paying, and paying a lot given how expensive some in-app purchases are, rankles a little.

But while there are flaws, Godfire is still an enjoyable game. Really enjoyable, in fact. I said it felt like a classic console or arcade cabinet game and I meant it in a good way. Levels are short and their encounters well designed so you never feel like they're wearing out their welcome, and bosses take careful timing and execution to defeat rather than mindlessly tapping buttons. As the levels go on, you'll likely start to feel that a lot of the gameplay starts to feel as if it's happening by rote, which is something a greater variety of enemy types would have alleviated. With planned free updates down the road to add even more chapters and gameplay modes, it's the sort of game you can keep coming back to in the long run, especially if you're the sort of person who loves survival and other difficulty modes. Godfire not only takes full advantage of the iPad's capabilities to look amazing every step of the way, it provides gameplay that's casual enough to get into right away, while challenging enough to make winning feel like a real victory.