God of Blades is an endless running/combat game designed by White Whale Games. Instead of focusing on jumping around like a little grasshopper, you are given the ancient and epic powers of sword combat, dispatching foes by unleashing various swipes and abilities as you take the stream of enemies that sands in your way. It's all about the artwork and aesthetic in God of Blades, and the development team absolutely nailed the look that will remind you of fantasy novels and prog rock album covers from the 1970s. Even if you weren't alive and kicking back then, everyone needs a little unabashed sword combat now and again! 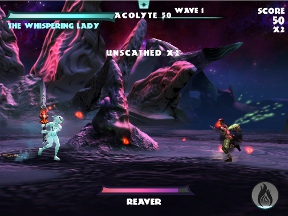 You control the Nameless King, a human-like being woken from his slumber and given the quest of destroying everything that he runs into. The King runs on his own, pausing only to swing his sword when you so command it. Enemies dash in from the right side of the screen with their own weapons and attack styles. By swiping in the four main directions on your touch screen, you can unleash different attacks to deal with each enemy's moves. Upswings, for example, are short ranged and fast, allowing you to poke enemies for a little damage and possibly interrupt their attacks. Forward swings are slow but devastating, and you can even parry by swiping backwards. Basic moves that translate into a lot of strategy once the game gets rolling.

As you work through the campaign mode, you'll unlock new sword types to equip, each with different strengths, weaknesses, and best of all, power abilities. A little icon hovers at the bottom of the screen while you run through each world, and tapping it unleashes some very helpful spells you can incorporate into your attacks. Battles form their own sort of rhythm, teaching you to watch enemy movements, react without thinking, and attacking only when there's a clear opening. Surprisingly intense, but also pleasingly dance-like in nature. 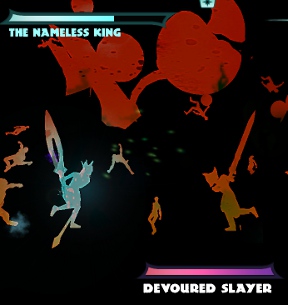 Analysis: God of Blades is a game that thrives on style. It doesn't try to create a new genre or impress anyone with a great list of gameplay facts and figures. It sticks to the basics, offering slightly more complex rock-paper-scissors combat, straightforward upgrades, an unlockable endless mode, and a few more extras. After that, it's all about artwork and setting, two elements that carry almost as much value as the gameplay itself.

God of Blades' gameplay may not be immediately captivating to every player. It starts off a little slow with enemies who are essentially pincushions ready to accept your sword to their face. That's fine for a level or two, but only after that does the real challenge set in. In a way, God of Blades is like Canabalt crossed with Punch-Out!! set in a 2D world built from the dreams of a 70s sci-fi/fantasy artist. Every part of that idea is awesome, just in case you couldn't tell, but it's certainly not construct that's going to be universally loved, especially for modern mobile gamers.

In the end, you might feel God of Blades' combat can be a little unreliable at times. Everything has a floaty sort of feeling to it that can take some time to get used to. Once you do, however, some real challenge actually sets in, and the game manages to communicate a sense of epic combat that is only heightened by the artwork and setting. This may not be the endless combat game that will gather all gamers together to sing its praises, but if it hooks you, you'll quickly become one of its many devotees.