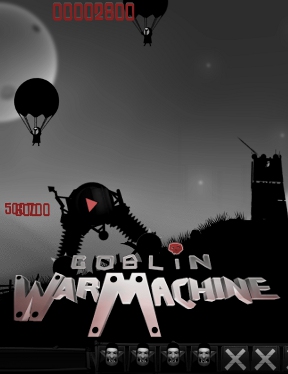 Big Block Games gives rise to a whole new kind of carnage in the physics-based action game Goblin War Machine, a snarky, silly little rampage that puts you in control of a group of goblins who have had quite enough of human superiority and decide to do something about it. "Something" being, of course, building a massive, destructive machine out of spare parts and rolling through the countryside with it, crushing entire armies and villagers beneath its wheels as the populace shrieks and flees in terror. Haha, yes! YES! How do you like me now, human scum?! HOW DO YOU LIKE ME NOW??

Control your war machine with the [WASD] or [arrow] keys, and aim and shoot your "shooty thing" with the mouse. ([F] flips your vehicle rightside up if you tip over, and [R] reloads the level.) Your goal is simply to roll from one end of the stage to the other, causing as much damage to the surroundings and its population as possible, while sustaining as few casualties of your own as you can. Earn points and skulls to spend on upgrades between stages, like the much sought after "big shooty thing". You won't encounter much resistance initially, but as levels progress, humans will start bringing out more and more obstacles, beginning with simple spear throwers and advancing to more elaborate forms of defense. Be careful; you're not indestructible. Each hit you sustain from an enemy kills one of the goblins running the machine; you can see how many are left by the little icons at the bottom of the screen. When the last goblin is taken out, your machine won't have anyone to handle it, and it'll simply fall to pieces.

As endearingly snarky as the whole experience is, wrapped up in a nice shadowy aesthetic, it isn't without its issues. The physics can be frustrating to the point where manually righting yourself after a flip is nearly impossible compared to how easily the terrain will tip you over if you're not careful. Enemy AI isn't particularly clever, often allowing you to hang back and pick soldiers off at a distance without reaction, or getting safely stuck behind indestructible debris where they can fill you full of holes as you pass. But still, when you're roaring along the landscape after a few upgrades crushing livestock and armies beneath your wheels while you blast towers to smithereens and send the royalty hurtling through the air, it's hard not to have a good time and let out a maniacal cackle or two. Maybe the next time you thrash a weak little monster you'll think twice about gloating; after all, he might be rounding up five hundred of his closest buddies with engineering degrees to pay your house a little visit.

Fully upgraded and all achievements unlocked. This is a great fun game :)

mid-air hit... I killed a bird but think it was triggered by the fact I wasn't touching the ground at the time

Also, the best level I found to grind was

Am I just being stupid or is there no way to see the Achievements screen ?

one of those games that's amusing addictive...BUT...there's no restart if you manage to let the humans win. You have to go back to the JiG menu and reload from the start.

This is a major flaw.

JustMe, hitting R restarts the level for me, even after losing. (It took me a while to work that out too).

The major issue for me is the number of times you have to replay the levels to see all the upgrades. I've completed all the levels a number of times, with gold skulls for most of them and still haven't seen the final chassis upgrade.

However, it's enough fun that I'll probably keep going till I get them all.

Or 'R' to restart

Actually, you don't need to reset the browser page if you die--you can just hit escape (you can see this if you expand the smallish window JIG opens as a default)

im sure that everybody that is into WH40K will agree with me on this one:

This is the Orkiest thing I have ever seen. ever.
More Dakka!

How the heck are you supposed to cross the collapsing bridges? The first one I could cross with the Wussy Main Thing, which was wide enough to not fall in, but the second one was too big even for that. Even if I back up all the way to the start and charge forward, I can't go fast enough to cross them before they collapse. Am I missing something?

Aha! Buy a Jumpy Thing and you can jump around a little. That will get you over the bridge.

Had the same problem Aegeus, after a lot of trial and error I suddenly noticed that the [up] arrow key makes your front wheel hop up in a sort of half jump. (Front wheel being whichever wheel is closest to the direction of travel.)

Make the popup window bigger so people can see the controls :P

[Done. If ever the popup window isn't large enough, you can just resize it with your mouse in the lower-right corner as usual. -Jay]

Fully upgraded and all achievements unlocked. This is a great fun game :)

mid-air hit... I killed a bird but think it was triggered by the fact I wasn't touching the ground at the time

Also, the best level I found to grind was

Well, Ive gotten gold on every level, and I still don't have all upgrades. I'm kind of sad that there's no secret level after getting every achievement and gold medal.

For a game that lacks any real sense of progress, has heaps of small quirks and becomes just a boooooring grind after you get half of the upgrades... this is surprisingly addictive!

I kept playing until I got all the extra parts, but I guess it's just a weird compulsion of mine.

Oh, and the jump ceases to be useful when you get too heavy, thus making most bridge crossings just a matter of sheer luck.

Looks great, but its a bit too much a grind-fest and the controls are pretty poor (though I appreciate that is part of the dynamic, just not my style). Overall, very well made, but too tedious.

When I posted that, Esc or R (or F) didn't work. Apparently is was caught and fixed pretty quickly.

I can't get it to work. Tried in IE and Firefox 3, but Flash just causes either the browser to crash (IE) or Flash to crash (FF). Haven't had this problem with other games

having trouble with the bridges?

Lighten up your assault...back it off to a smaller chassis and the lightweight wheels with the biggest springs you have

I'm having the same trouble with flash player crashing. Tried updating and that didn't change anything.

Fun game, but poorly timed. Even after getting gold on all levels, which required quite a bit of replaying, I'm 1300 skulls short of getting all the upgrades. I kinda want to see what they are, but not enough to spend an hour grinding for it.

To all game designers: please let me turn off the sound!

Fun game, nice little diversion, but not worth the effort of a full upgrade.

Especially since the Tricycle, Squarecycle, and Complicated Main Thing all had a very bad habit of just spinning in place on hills, they were seldom worth the investment. Fun, but not worth it. And the Armored Main Thing didn't actually appear to be.... :)

It's sort of easy to get across the

collapsing bridges by using a light chassis and the jumpy spring things.

However, once you've gotten a few more skulls, it's fun to combine:

That combination lets you get up sheer surfaces fairly easily, makes you heavy enough to plow right through most structures, and gives you a fast-firing cannon to help you deal with

the little skull bombs, ground cannons, and those kamikaze birds.

You could also use a heavier chassis, which makes it easier to

launch the king off the map

by giving you a lot more momentum.

I wasn't even attempting to finish all of the achievements, but by the time I had enough skulls to unlock everything and got gold on every level, I had finished them all.
The main ones you have to try for are

"Mid-air hit", which achieve by shooting someone up into the air (usually a cow) and them shooting them again while they're in the air

"Hit the King off the map" I found it was easiest on one of the later levels with the armoured chassis. (obviously this achievement is done by hitting the king off the map

Bankshot, which is when you shoot a cannonball in midair

I forget what it's called, but when you crush a cannon you get an achievement

For those looking to buy the best items the fastest, I found the best chassis you can buy first is

The armoured Chassis, or the fourth most expensive chassis, it provides a lot of protection and doesn't spin around like the more expensive ones do

When choosing wheels I think it is best to

buy the second most expensive wheels, as they have a lot of grip and offer a lot of protection in combination with the armoured chassis

I found, after buying all of the guns that I

consistently used the second most expensive gun, the three-shooter, the most