What's this?—a majestic billy goat in its natural habitat. It emits a gentle piercing shriek before charging gracefully through the glass walls of a nearby greenhouse. After executing a very impressive backflip, the goat explodes a gas canister, scattering a crowd of protestors. Finally, the goat latches its long adhesive tongue onto a passing truck and tumbles away with dignity. Truly, this sublime beast is a sight to behold. If this description has you confused, you haven't yet had a chance to play Coffee Stain Studios', ah, unique new simulation game, Goat Simulator. Described by the developers as "small, broken and stupid," the game employs abstract humour, open-ended sandbox gameplay, and a tone of indulgent silliness to craft an experience enjoyable for nearly anyone. 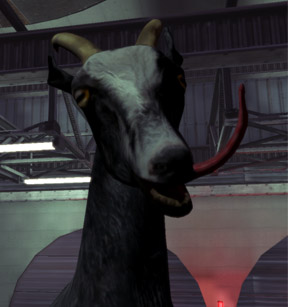 The [WASD] keys are used for movement and the [spacebar] to jump, but players can also headbutt or kick with by left-clicking, enter ragdoll mode with [Q], "lick" things with [E], and perform a variety of other tricks. There is no overarching objective to the game or even a way to "win," but there are points to earn, countless goals to accomplish, collectibles to find, and even a hidden mini-game or two to discover.

Though the concept satires typical "realistic" simulation games much like Surgeon Simulator 2013 did, Goat Simulator's gameplay stands up extraordinarily well on its own. Though it often feels like a skateboarding game or even something from Garry's Mod, for the most part Goat Simulator is simply incomparable. The game's visuals, background music, and completely irrational physics make it clear that this game is not to be taken very seriously, but this is part of what makes it so much fun. The first time you careen down a waterslide while dragging a helpless person along with your elongated tongue is pure gaming joy... and the second time you do it is no less wonderful either.

The feverish excitement surrounding a game like this has the potential to mask criticism, but in this case, the hype is not misplaced. It has its glitches and flaws, but these problems are celebrated rather than hidden. It will take much longer than you'd expect to exhaust the resources of the admittedly small default world, but when you do, there are a myriad of maps and mods created by the game's already substantial community. If you have some extra money and this seems like your brand of humour, the $9.99USD is more than worth it for a game that, more than anything else, is just plain fun. This is one time that it's definitely okay to follow the "herd mentality."