Go Home Dinosaurs! doesn't sound like anything a sane person would say, mainly because dinosaurs are awesome and inside all of us lurks a five-year-old (or Ross Gellar) giddy at the thought of dinos in our house. But it's only a good idea to have them around if you're not barbecuing, and unfortunately that's what the gophers happen to be doing, and now the only defense against the BBQ-hungry horde of giant lizards is the tower kind... tower-defense, that is! Fire Hose Games delivers a gorgeous comedic and colourful game that's big on strategy. 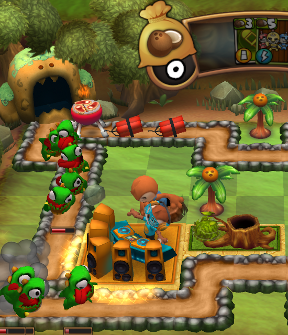 At the start of each level, you'll be given your choice of cards to fill your maximum hand... since different cards summon different units with their own unique effects, you'll want to think carefully about what you're up against to decide and and how much to use. Dinos will flood in waves from the cave and head along the path to your barbecue. Two piles of dynamite will protect your delicious meats at the cost of a single steak each time a dino triggers one, but when those run out, it's game over, man! Initially, all you have is one gopher who will dig anywhere onscreen you click on and attack anything within range. To get help, you need to send him to collect coconuts when they appear, and these are spent to use the cards in your hand. Each card, when picked up, will show you the size of your unit and the range around it, so right-click if you need to rotate it and think carefully before you place it since you can't rearrange a unit once it's down. Collect coins to spend in the store for special cards with temporary boosts, or fancy new outfits to class up your gopher. 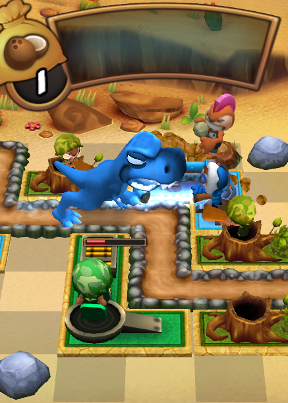 Analysis:Go Home Dinosaurs! is not a game to be played without an eye for strategy. You'll want to eye the lay of the land to figure out what cards to pick at the start of each level, since some units are useless on certain stages where the terrain prevents them from being placed effectively. And speaking of being placed, since you can't move units once they're down, you really need to think carefully about what you're doing. Why can't I spend more coconuts to move or rotate towers? And why can't I choose which dino my gopher attacks when there are a whole bunch of them within range? These two seemingly small things can lead to big frustrations if you accidentally plop down a tower in the wrong position, or realise late in a long level you're going to have to restart because your placement isn't working out. This, along with other things like the lack of an option to speed things up or see how many dinos of each type you'll be facing, means die-hard tower defense fans may find a few things lacking.

Of course, you shouldn't take those criticisms as an effort to warn you away from it, because if I didn't think you should play Go Home Dinosaurs! I wouldn't be here telling you about it or tabbing back into game to play another level when I should be working. The challenging yet accessible gameplay and beautiful character design makes this the perfect choice for casual fun. The card setup is actually a clever one, forcing you to really think and plan your layouts to get the most out of them, especially when it comes to figuring out just how to fit each unit to its best advantage. As a result, the game's vibrant design packed with pop culture references masks a perfectly engaging little gem. There's even an optional vegetarian mode to replace all the barbecue with veggies... though you'll have to grind a whole lot of coins to pay for it first. With a ton of levels, unique towers and baddies, and some serious challenge to boot, Go Home Dinosaurs! is a vibrant little game that deserves a spot in any defense fan's library.

There is a shop, but you cannot buy useful things there. There are no upgrades and all the coins you are collecting are more or less useless. Some of the cards are good for nothing - why should i spend cocnuts to buy "digger"-cards which give me more coins when i can buy nothing useful with this coins?

There are no additional game modes. There are only 60 levels which are relatively easy to master and thats it. If you are through with the all levels the game is over. I've hoped to be able to replay these levels in a harder mode - but this is not possible.

Given all these downs the game is not worth the money. There are free to play games which offer a lot more depth and replayability.

Sorry, but this game is a no go for me.