After a long day of slaving away in the mines, these gnomes just want to get back to their little homey cottages to rest their tired little bodies. Their bodies are so tired in fact that their brains are on snooze while their feet just follow the bumpy little paths. This wouldn't be so bad if it wasn't for the vile witch who twisted and falsified some of the paths. And being the opportunist they are, a large gathering of monsters have found their perches at the dead ends of the roads so they can gobble up any tiny gnome who ventures their way. Thankfully the paths are covered with 'switches' that alter the pathway so you can make sure the Gnomes have a safe travel in this cheerful puzzle game, for browser and Android, brought to us by Art4Game, Gnomes Go Home. Every level you need a certain number of gnomes to reach the house while scooping up stars along the way. Things aren't going to be as easy as it sounds with the witch still around, and throw in a few trap houses and you'll find yourself tightening on your thinking caps to win this charming little game. 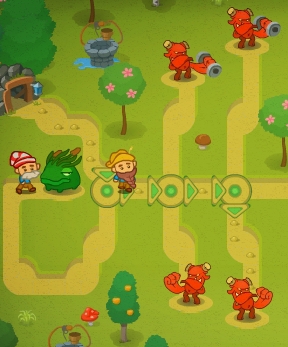 With the chances of gnomes meeting their death by being swallowed whole, Gnome Go Home could be a pretty dark game. However, it's just the opposite. These adorable little gnomes who call out 'I'm home!" in their squeaky little voices and trudge along so cheerfully trusting in your unseen hand will make your day, even if they get chewed on a few times before you get things right. The music also fits right in with its silly gnome singing. Everything is so lighthearted that having the puzzles brain-melting-ly hard would have ruined the whole feel, so Gnome Go Home is on the easier side of the challenge scale. Fix the paths so the bumps lead right to the house and start the gnomes on their way. The witch will randomly change your switches so you have to be quick to correct, clicking on the markers once or twice to get it back to the right position. Later in the game Trap Houses appear, and they look identical until you have the gnomes moving, and then occasionally they show you a sign that something isn't right. Or you can just take a chance and watch to see which one kills your gnome before adjusting the path appropriately so his fellow brothers won't also end up as lunch. All that being said, there is still a bit of thinking to be done, so it's not numbingly easy. It's a mix of clean fun with some thinking mixed in. So find your pathway home so you can relax and play this yourself. Just... make sure its the right path so you can live longer than the average gnome.

Wish this had an 'easy' 'normal' 'difficult' game speed option.

This game is kind of in between Lemmings, and one of those games where you switch the train tracks for different paths. In terms of ease of controls, the puzzle element and difficulty.

I gave up playing after about level 3. I had set up my routes to get the gnomes home safely, and knew which "switch"/set of arrows I'd have to change to get all the stars.

But the gnomes came pretty close to each other, and I had to cycle through a 'bad' direction to get to the other 'good' direction.

Funnily enough, I still got a 3 star 'perfect' for that level, despite accidentally feeding one to a monster.

Gotta say, the music is terrible. It's just the gnomes going "La la" over and over.