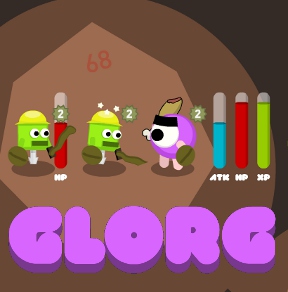 Glorg, Grapefrukt's new one button hack-n-slash RPG tribute, has some great hilariously misleading faux-box-art, and an interesting premise. Glorg is the story of a warrior whose unibrow is small but whose heart and courage are large. Glorg finds himself in a dark, deep dungeon. At first, Glorg is scared, for Glorg was surrounded by monsters, Glorg's least favorite thing. But then our hero sees that also surrounding him are treasure and weapons; Glorg's favorite things! Striking out with his mighty stick of bashing and shield of blocking, Glorg heads out to explore. Will Glorg ever see the light of the surface again? That's up to you! You control Glorg just by clicking the left mouse button. The green circle next to Glorg will tell you what will happen when you click; it's used to explore areas, loot treasure, walk, and, most importantly, fight.

Battle is real-time, so you'll need to pay attention to the prompts that appear on your green circle. Click when it says "Block" or you'll take damage. You can click fast to attack rapidly, or you can hold down the button to charge up a powerful attack, which has a chance of stunning an enemy if it hits. If you defeat your enemy, you'll not only earn EXP, but you'll also occasionally get treasure that you can use to purchase portals. Portals let you skip levels if you die, so you'll learn to love them fast. As you explore, you'll uncover new areas in the dungeon; you can't choose the direction Glorg moves when presented with multiple paths, unfortunately, but if he runs into a dead end he'll simply head back the way he came.

Analysis: Since the release of One Button Bob earlier this year, platform developers have tended towards increasing innovation with ultra-streamlined control schemes, but Glorg is the first time I've seen this kind of simplified structure applied to an RPG framework. Reducing any genre to minimalism is going to come off as perhaps overly artistic, but fortunately, Glorg, with its adorable aesthetic, humorous asides, and sense of dreaminess, is as entertaining as it is experimental. 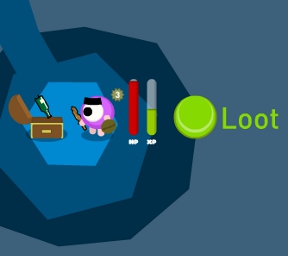 Naturally, streamlining a genre can mean sacrificing quite a bit: in this case, story, customization, and any sense of non-linearity. And I don't mean it's "linear in the sense of "it only has one ending." I mean linear. Lin-E-Ar. Super-Linear. Ultra-Linear. The kind of linearity that would cause a straight line to say "Boy howdy, that's linear!". It turns out removing most aspects of the control scheme really limits player-freedom. If you've ever wondered whether Nethack could be reduced to a series of quick-time events, wonder no more.

Of course, ultra-linear quick-time-event-based games can be quite entertaining, if often repetitive (...I'm looking at you, Dragon's Lair), and by removing the illusion of choice, Glorg allows for a subtle parody of most RPG player behavior. For instance, at first I found it frustrating that Glorg always took the most circuitous path through the dungeon, never finding a staircase until he had explored all the rooms. Then I realized: when crawling through an RPG dungeon, and having barely explored it before finding the staircase to the next level, does any self-respecting gamer immediately take it? Of course not! The designer wouldn't have included the other rooms if they didn't contain some awesome loot! So every room ends up explored anyways. Likewise, I thought it a little strange that you had no say over what weapon Glorg used. Then I remembered that 95% of the time the only thing you ask about a found weapon in an RPG is "Is it stronger than the one I already have?", even if that means replacing your broadsword with a sharpened umbrella. Grapefrukt clearly understands the tropes and player behaviors of the RPG enough to poke fun by making them automatic.

Glorg is a unique experience. At first I was drawn in by its charming style and music. After playing a while, I thought it more than a little monotonous. Yet I kept coming back to it, using the check-points to get further and further, five minutes or so at a time. Glorg sometimes feels like a mini-game (if a high-quality one) expanded a little further than its mechanics could handle. Still, Glorg is an interesting twist on the RPG formula and quite worthy of your time.

I'm not sure if it's just my clicking ability but I seemed to block when I was trying to attack quite often. I've also yet to beat one of the 'volley' baddies

I've arrived to level 6. I lost against a rock-throwing dude, and I have to start all over.
It's quite annoying, especially because when clicking, Glorg sometimes block instead of attacking or attack instead of blocking.
But, the game's pretty good. Except that, yes, I would classify it as a mini-game.

I got pretty frustrated with the attack/block issue and quit around Floor 6 and the volley enemies.

This is one of those examples you see ever once in a while that forces us to redefine the definition of 'interactive' and 'game'. Of course by redefine, I mean tighten. This plays like Progress Quest with more pretty and less user friendly.

Now where did I put that auto-clicker program...

It's a good game, but it feels linear.
A good tip is keep playing and you'll eventually buy a portal that makes that the next time you play you start further than the start.
Hope that helps.

Its a interesting game, and no, its not progress quest. Though it is straight as a line, there are definite requirements of skill and interaction to count it as a game. A somewhat difficult one at that. However, there are quite a few flaws to it.

The major frustrating thing about the combat system is the stun. It is just too hard to recover from. Once you have been stunned, you're probably going to get hit again, which might stun you once more. The "safest" way to get rid of stun is hope that the enemy will attack you lightly. As you go into the higher levels, the attacks get much stronger compared to your hp (while your enemies have a relatively similar ratio throughout), meaning 2-3 hits will be enough to kill you, basically making getting hit a gameover. Though without stuns, it might make the game too easy/even more repetitive.

Some bugs I've noticed when playing though this:
If you kill the enemy while it is about to hit you, it doesn't die, but you get the exp as if you defeated it. This basically means you can get twice the exp from 1 enemy. Being high level is actually rather a BAD thing gameplay wise as the enemies will match you in lvl, and kill you faster at higher levels.
If you find a weapon that is weaker than yours, you supposedly can sell it for thousands of gold, but you only get 100 like from everything else.
The last stage has no music, is rather odd in general, and after you win, it doesn't quit from that stage just making you walk in circles afterwards. I'm guessing they didn't have time to make a final boss battle and just slapped the last level together.

I wonder how far we still can stretch the term "Role Playing Game", when only one button is involed. What Role do I play? .... I know the term got being reinterpreted to any "stat-based game" rather than the system Gygax invented as surrounding for real role-playing (and where to be called a min/max powerplaying is an insult). I'd rather take this game as as a hilarious auxesis about what everything is called "roleplaying" nowadays. Gameplay was interestingly experimental, until I died, didn't feel like restarting at level 1.

the "explore" button has no purpose. What is the point of choosing to do so when you can't even decide to back away or choose your own path on divided roads?
...and what are the golds for??

How do you get past the electro dudes? I found em at the green levels. I can't seem to block the electric attacks.

@Pandragon
Gold is accumulated between gameplays after glorg dies (looks like the author is looking for some perseverance though to me this breaks the good feeling of getting sucked in to a game). And I agree that being a one-button game walking, exploring, healing and looting look unnecesary.

@THE NINJA!
Strike when he is not sparking/ raising arms.

Random hangups and lag are a problem in a timing based game. Every time I died was due to this.

Also, allowing enemies to attack as soon as you've explored a room, possibly before both the button release and press to block can be registered by flash, is a bit brutal. More brutal is that this attack may stun you. Punishingly, if the game didn't see fit to heal you, or you're out of healing, this free hit may stun you and that second attack might kill you.

This only exacerbated by the random lag. The lag seems fairly cyclical, and I only experience it when Glorg is loaded in a tab (Firefox 3.6.10, Windows 7 64, yes, processor affinity is set for Firefox and Flash).

Some rebalancing of the loot handouts vs. teleporter costs might be in order.

Nice skill challenge. Not a game, because there are no choices, but if taken in the style of Progress Quest, Achievement Unlocked, and Upgrade Complete, it makes for nice commentary.

I may like this game more if it was turn based giving you a choice between block and attack.

[Edited. Please submit your game suggestions using our online form found in the menu above. Thank you. -Jay]

I really not trying to advertise but I would love to see more games like this and hope that I can put someone into the spirit to make a game better then this and the one I posted.

The problem with this game is sadly you can't really do much. I would like more choices but I guess that is kinda asking for too much as this game run on the idea of having only one button.

I am no hardcore gamer and, yes, I play causal WII games. This game is well-designed, even my 2-year-old daughter could control it and enjoys playing it.

IMO, walking and healing may be unnecessary, but Exploring is a must-have: "Hi, don't attack me, I am not ready for fighting yet."

i cant move anymore after i fight and it's annoying!