From January 29th to the 31st, across the globe developers came together to make games with their own unique interpretations on a theme in a very short time. During January 29th to the 31st, I was... uh... probably playing X-Com or Borderlands in my jammies. It's no small task to make a functioning game in just a few days, and yet for Global Game Jam 2016, a whopping 36,000 creators in 93 countries did just that, crafting almost 6800 games! This year's theme was "ritual", and while we obviously haven't gone through all the games yet, here are a few of our favourites that are playable free online in your browser right now. Play or download all the Global Game Jam 2016 games at the official site! Have one you think is awesome too? Post it in the comments! 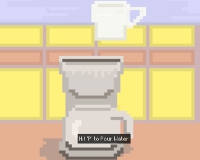 Quotidian - It'll take you just a few minutes to play through, but this funny and morbid little game by David and Natalie Maletz with Matthew Bumb proves that work must go on, and shows that the more things change, the more they stay the same as you go through what seems to be an ordinary work week. But though the days pass and seem to be identical, it gradually becomes apparent that something weird is going on... but hey, as long as you have a cup of coffee, everything must be fine, right? It pokes fun at several familiar concepts, and though it gets a little dark, those of you with a slightly twisted sense of humour will appreciate it. 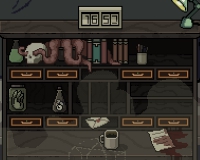 The Test - Created by M. Ramón Lopez, Xavi Serra, Arnau Martín, and Carlos Nuñez, this point-and-click puzzle game puts you to work solving a creepy test under a time limit. Initially, 20 minutes seems like plenty of time, but the more you mess up, the faster the clock ticks. Each drawer contains a puzzle to solve, some simple and others simply strange, and you'll need to figure out how to play each one to beat the clock. Though a little glitchy, and prone to repeating the same puzzles in different drawers due to the way they're randomly assigned, some top notch spooky atmosphere and a concept that lends itself well to a feeling of dread make it eyecatching. 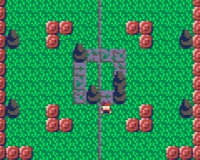 Symmetry - Sometimes simple is definitely sweet, and this puzzle game by Connor McHarney fits the bill. Crafted with PICO-8, the goal is to assemble the stones on either side of the door in the proper formation to trigger the mystical reaction to let you move forward. Use the [arrow] keys to move, and [Z] or [X] to reset if you get stuck. You can only push the rocks around on the gray tiles, so keep the title of the game in mind as you shuffle them about. Its minimalist design works with its simple concept to make it one of those pleasantly satisfying little experiences that makes your brain work without the use of a lot of bells and whistles. 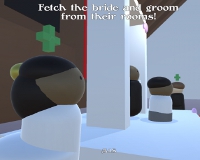 Kromgar the Wedding Planner - In this ridiculous action game from Marcelo Perez, Brent Ellison, and Tanya Short, you're trying to make a wedding happen the only way it can... by yelling at people until they go where you need them and do what you want them to do. Easier said than done with everyone milling around like ants... oh, and of course you'll need to keep them away from things like the cake if you don't want them to devour it early. It's weird, it's hectic, it's clunky, and it perfectly recreates what an actual wedding is like, making it a wonderfully silly interpretation of the theme. 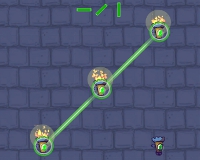 The Cloister - Inspired by The Witness, this simple puzzle game by Momin Khan, Brendan Mauer, Daniel Davis, and Emily Kudrot is 20 levels of pure mellow relaxation as you try to connect the torches to match the lines onscreen. The trick is you can't use the same torch more than once, though despite what you might think from the shapes required at the top of the screen, you're not matching them exactly... a square will match with a square turned on its side, for example. Though it's a little repetitive and could do with some clarity, there's something very soothing about its presentation and execution, making it a great choice for puzzle lovers who, you know, might sadly not be able to drop a bunch of cash on the Johnathan Blow 2016 masterpiece at the moment.

Regarding the cryptograms in The Test...

The solution to one is "better late than never". I've got a hypothesis that all the answers are proverbs related to time.

The Test is broken, rendering it unplayable. The shuffling of the sliding tile puzzles is done by adding the tiles at random, without checking the validity. Doing so for sliding puzzles means that half of them can not be solved, as there will be two tiles that should have been swapped, when placing them. Swapping them is not possible by sliding them without messing up other properly placed tiles.

Unfortunately this mistake in the puzzle creation is not something you can see until you have done most of the puzzle, meaning a lot of time wasted, and making it impossible to finish the game.

Alright, The Test actually does have states where all puzzles are solvable, but I got into those states twice and had no real winning message. 5-ish minutes left both times and the clock remained ticking down.
When I got to states with unsolvable slide puzzles and that one 4-number code that I couldn't figure out, I just refreshed to get a state without those puzzles.
Fun game though, I do enjoy puzzles.

The cryptogram phrases are:
Four words - 4442

No man is an island

This is gonna bug me for a while, even though I'm not going to go back and actually solve it.

How do I solve the

Other puzzle solutions in case you need to know

Number codes show up on the wall (you may need to turn on/off the light to see it better), or after you solve other puzzles. It would be funny to see a state where all of the puzzles are Number codes and all need codes that come from other solved puzzles

The Tarot Cards is just memory. There's no way to avoid failure a few times here, looking at the cards to match them, just take the hit

The Candle puzzle is based on the pentagram you see on the wall with the lights off. I missed it the first few times, there's actually darker dots inside of the circles. The dots correspond to candles that should be lit

The Pipes are a simple connecting pipe puzzle as seen in various games. Make sure that no pipes go into the walls and the pipes on either end of those pipes are connected and the solution should follow

I can't explain the sliding puzzle solution because as SonicLover said, it's all random. Plus it has a state where it's unwinnable. I suggest you just hope that it's winnable and restart if it isn't \/(:/)\/

The Button puzzle with the button on the side of the board with the all seeing eye is just memorizing the numbers that pop up. No solution, all random

Sorry, I mistook the users. I meant ThemePark where I said SonicLover

Anyone who's struggling with the pipe puzzle in The Test...

...turn of the light and look at the blinds on the left. You can just about see the shape of the path that the pipes should be.

Also, yeah, I'm down to the last 4 digit code box, with no more 4 digit codes. What's the logic there?