The death course lies before you. You can't remember how many times you've completed it. Every time through, it gets a little harder, and the voice keeps mocking you. It would be the easiest thing in the world to Give Up... but also the most difficult too. Give Up is a high-difficulty action-platformer by jmtb02 and Tasselfoot, that, little by little, attempts to drive you to surrender, though a quite entertaining one. Make no mistake. It is tough, but it is fair. The incremental challenges at its core are inherently seductive, as if the game is constantly saying "Well, you were able to get by that slightly-easier challenge... what's stopping you now?" 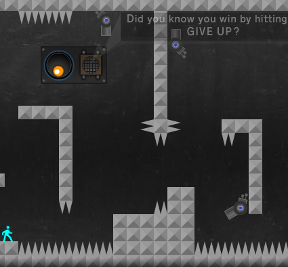 Controls are standard: the [WASD] or [arrow] keys to move, jump and double-jump. The goal is to get from the entrance door to the exit door. But, every time you do, a new obstacle is added: first the spikes, then the cannons, then the falling platforms, the lasers, the missiles, the saw-blades, the pneumatic smashers. There are forty levels in all. Oh, and one more feature: that giant, shiny, blue, candy-like button labeled "Give Up", just waiting at the bottom of the screen,oh so ready to be clicked. Of course, Give Up should appeal most to that strain of gamer who loves the thrill of balancing hundreds of failures against the thrill of a sudden success. Still, even those who lack that streak of masochism should enjoy humor of the developers, most akin to the darker strain found in the Exit Path games. Most won't make to the end without succumbing to the temptation to Give Up, but nearly everyone should give it a try.

Whoo! Made it. I can't remember my death count but most of them were on floor 25, which I painted quite thoroughly, haha. I love how each level is just a slight alteration of the last; it's a pretty cool idea.

The controls were unresponsive for me. It felt like I was getting through the levels with nothing more than luck.
I do like what happens when you give up, though.

I beat it. It annoyed me. Super meat boy, as a comparison, is rather similar. However, where SMB is very much about dodging a ridicoulous set of obstacles, the path through is always there to be seen. This game throws in so much chaotic stuff that its no longer there. a milisecond of timing difference will completely alter the obstacles you face. Couple that with the invisible walls so you can't even see the obstacles all of the time, it getting through a level feels more like a feat of luck than skill. SMB never did. Some of the levels were extremely challenging, but you felt accomplished for overcoming it, not lucky that all of the bullets ended up with the proper timing.

Also, was it just me, or was the double jump finicky?

Double jump was a particular annoyance, but I suffered from awful lag as the gibs piled up. Granted, I'm using Chrome on a Mac, and flash tends to be horrible frequently, but it felt worse than usual here.

For about ten floors near the end I just made my way by double-jumping the single blocks across the top. There's no chance of maneuvering below once you die and the timings of the obstacles change.

jolson: I use Chrome on a Mac too. Flash works very well for me, and this game gave me no problems with lag. Perhaps you should check your Flash installation?

Blimey, you took ages to feature this game! I remember telling you about it months ago.

@default.scanline.renderer: I ran into that problem too, but found a solution: wait about a quarter of a second after respawning. It's a bit tricky, though; too quick and you get buzzsaw'd, too slow and you get shot, WAY too slow and the platform gives out under you.

Yeah, I don't know about you guys, but if I was to find an easy path to the door - mostly by jumping near the top of the level - the consecutive levels would be just as easy, with slight differences here and there. As long as I found the path, I started running and jumping the second it started and I passed to the next lvl quite easily.

Also, I thought for sure jmtb02 was going to pull an anti-game on it, making it so that winning was actually losing, through a sort of a http://tvtropes.org/pmwiki/pmwiki.php/Main/LotusEaterMachine.

Though I found the levels to be a little repetitive, as the concept of using the same room with minute differences is pretty much a trademark of jmtb02, I found it to be pretty enjoyable to the end.

after i got in the level 20s started to lag, pointless playing a game like this with lag. Yes gave up. (mac firefox)

Managed to beat this game without walkthouhs or anything, level 30 was prob the most hard considering it was utterly madness and required to run at almost all time.

I'm also having lag issues, which are causing level 30 to be horrific. I've more than doubled my already high death count on it and I still haven't won.

3,657 Views
3 Comments
chrpa— Jayisgames needs your help to continue providing quality content. Click for details Hi! Weekday Escape is here! We'll start with a short but sweet game from giucalistro. Next up is a game from TRISTORE, which is a very successful...  ...